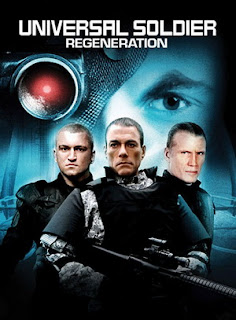 
When a terrorist group takes over part of Chernobyl and threatens radioactive death if their demands are not met (and they kidnapped the son and daughter of a prominent politician to boot), Luc Deveraux (Van Damme) is called back into active duty.  Now in a kind of rehab/therapy where he's learning to live again, he must retrain for combat. He faces his toughest challenge yet, as the terrorists used stolen technology to create the ultimate emotionless, unstoppable killing machine, dubbed "The Freak" by U.S. forces (Orlovsky). But they also open Pandora's box and resurrect Deveraux's old nemesis Andrew Scott (Dolph). Deveraux has his work cut out for him this time around...

It's actually pretty shocking how good Universal Soldier: Regeneration truly is. It doesn't even really HAVE to be this good. Far from your average "dumb" action movie, this seems to be a rejection of that notion, striking an excellent, precise balance between melancholy intelligence and frighteningly brutal violence.

Regeneration appears to be a reaction to The Return. Almost as if the filmmakers were embarrassed  by the badness and silliness of that unfortunate outing, the swung the pendulum back the other direction (almost too much), creating a dark, adult, nihilistically violent creation, but it's not without some emotion and humanity as well. Just a great job done all around. 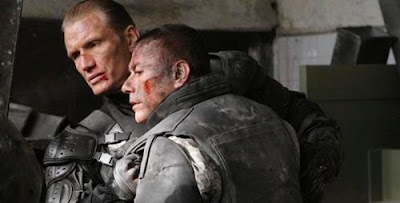 Everything from the production values, to the acting, to the action, and everything else in between is light years beyond The Return, making it truly a travesty that that turkey was released theatrically in the U.S., while this wasn't. Regeneration is well-shot and well-directed by John  Hyams, son of director Peter. Hyams treats the material seriously and with respect, and everything that happens plotwise makes perfect sense. It's all idea-based (even retaining the best ideas from the first Universal Soldier film), not throwaway action. In the hands of another director, this could have been half-heartedly slagged off as "just another Universal Soldier movie". But the fact that Hyams does not do that, or even come close, is totally refreshing and comes as a great relief for true action fans.

Hyams hits all the right notes - from utilizing the bleak Bulgarian locations to their fullest potential, to bringing the Universal Soldier franchise into the present day. Using the Navy Seal-like soldiers strongly reminiscent of the U.S. forces in Iraq and Afghanistan, and the uncompromising nature of war, as a background to amplify the audience's fears about our own mortality. After all, even our best soldiers are no match for their SuperSoldiers. We'll definitely be watching to see what Hyams does in the future, as he seems to have a strong grasp of how to do muscular action.

Undoubtedly, many consumers probably thought that this IS just another Universal Soldier installment - it's almost a shame that this movie doesn't have another title. Having been burned on The Return, consumers might not know what they're truly getting here - something much, much different and worthwhile.

Van Damme puts in an excellent performance, Dolph is always awesome, and Orlovsky is perfectly cast as the scary freak. All the actors in the film do a pitch-perfect job. A definite win for everyone involved, we enthusiastically support Universal Soldier: Regeneration.

Great one guys! I loved this film and can't wait to see what Hyams comes up with next!

I liked this film and Return pretty much equally, the made-for-TV sequels weren't that bad either, I wonder which direction the next film will go in?

Regeneration was awesome! I was able to forgive the second instalment when they dropped this bomb of righteousness on me.

Venom: Hmm, good question. Happy Dolph and Van Damme are back in the franchise.

M W: Regeneration rocks! The 2nd one was just a blot. This totally made up for it.

Completely agree. I watched this expecting it to be a complete travesty and was genuinely shocked - in a good way - by how good this was. You have to congratulate everyone involved.

I would've been with you on this, if not for the Dolph Bait-and-switch. I can't abide by having Dolph prominently on the cover, and only in the film for like 10 minutes-- even though it was a great ten minutes. You could also make the case that this is a Van Damme bait-and-switch too, because he's maybe in it a third, most of which is spent in a lab. I'm hoping the next one will be the true showcase of Dolph and Van Damme that this one was sold to us as.

Exploding Helicopter: Totally agree. This could have been a joke like the 2nd one, but it wasn't!

DTVC: It definitely needed more Dolph and Van Damme, but the movie was so entertaining, it was ok if they were off-screen for a little bit. Hopefully "A New Dimension" uses them a lot more!

Where was Van Damme great in this?

This wasn`t good, I must strongly disagree..
Dolph was wasted, and even Van Damme didnt have enough screen time.
Violence alone doesnt make a movie good. Guess too much DTV does lower the bar of expectation.
It wasnt good in my humble opinion, having been one of the greatest JCVD Fans of all time,lol.

We felt that there was more going on in Regeneration than just violence. There was an intelligence at work and both Van Damme and Dolph had their strengths played to.

Hopefully in Universal Soldier: A New Dimension they will have more screen time! lol

I side with Hellford667 on this one. Not nearly enough JCVD or Dolph in it for my tastes. The villain really overshadowed the first half of the movie and Van Damme spent too much of the movie out of commission. The JCVD vs. Dolph scene was quite epic but it was too little too late.

Interesting take on it. It totally needed more Van Damme action than acting in a lab. But when Dolph and Van Damme fought again, it was pretty awesome!

Van Damme acted without passion and a face that could make me push the stop button, so absent or bored..the last scene is just him walking away...like he was glad to be finally done with this.
I hope he makes for a good villain in EXP 2, but im in doubt...for a few years now , he looks so drained of life, its a shame. In his tv reality show, which Id say you should watch , he even asks for a year off, but only keeps making cheap movies, 3 or so in a row,4 if we count exp 2 in. I have to write a big thing about him on my blog soon, feel like it has to get off my chest, as a former first rate fan its so sad watching his last efforts. But ok, for that, stop by on my blog in the next few days..:)

Will have to check out the reality show! He should stop making cheap movies and take a break.

Also will definitely check out your write-up on Van Damme.

great review. totally agree: this installment was awesome. great action, great use of music, great bleak style. one of the best direct-to-DVD action films of the past few years. roll on Universal Soldier: A New Dimension...

Thanks! We are really excited for the next installment. Plus Scott Adkins has been added to the cast!...which should make the movie more awesome.

You know what? I was fine that Van Damme and Dolph weren't the main focus of the film. I think it would have been corny to have Dolph as the main villain again, but as a sub villain, that was cool. Also it made it feel like there was a world outside of Luc Devereaux and Andrew Scott.

I think it was likely a cost thing - having Dolph only for 5 days and Van Damme for 10 (was it?). It made Hyams think creatively how to use them best.

I expect New Dimension will do the same thing by focusing on Scott Adkins while using Van Damme and Lundgren in small doses.

Anyway, good review - it's a very above average DTV sequel. Will probably try and cover it soon.

Thanks! Totally agree with your comment. Looking forward to your take on it, Jack!

I thought the movie was ok (and quite brutal at times) and hey...I bought it on Blu-Ray! But I will agree that Jean Claude looked bored throughout this movie. Dolph seemed to be having fun (doesn't he always?)

I... I didn't even know this existed. I saw the Return, and it made my eyes bleed. I MUST watch this now. Your write up has given me hope again.

Lee Nicholson: It's possible that JCVD was contractually obligated to make this - We hadn't heard that. That might explain his bored expression throughout.

Hoaks2: Forget about "The Return"! The makers of Regeneration obviously knew The Return sucked royally (and that it is insult to the Royals) so they tried to eradicate all memory of it. Looking forward to your opinion about it!

I really, really disliked this one for some reason. It looked like JC wanted to be everywhere but there, there was too little of Dolph, and the Orlovsky guy didn't do much for em either.

We respectfully disagree with your assessment. It is more about the concept and the execution of the material than the stars involved.