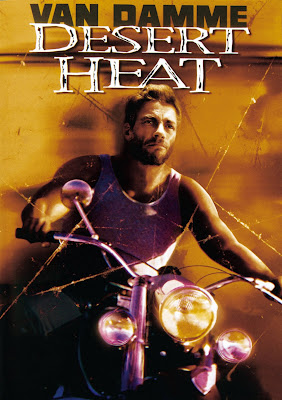 Eddie Lomax (Van Damme) is a mysterious stranger who comes to a dusty ol’ California town. When some local good old boys called the Hogan family, not to be confused with the delightful 80’s sitcom, assault him and leave him for dead, Eddie’s buddy, Johnny Six Toes (Trejo) nurses him back to health.

Lomax then makes it his mission to get revenge on the Hogans, and one of his main methods of doing that is to pit a faction of other local no-good-niks against them. Lomax must be a big movie buff, because we’ve all seen that plan so many times before. He then enlists the help of Jubal Early (Morita), a nice man who annoyingly repeats all his sentences, the crotchety old man Eli Hamilton (Erwin) and the inexplicably Indian road house owner Singh (Schiavelli) to help him out. The owners of the local diner, the Reynolds family - Dottie, Rhonda, and the prerequisite Pop (Pressly, Fitzpatrick and Rainey, respectively) all love Eddie and get behind his mission quickly, and of course there’s some predictable romance between Rhonda and Eddie. Will Lomax ever turn up the DESERT HEAT?

At this point in his career, Van Damme was in a rut. After a long string of either good or successful movies, he went on to make the awful Universal Soldier: The Return (1999) and then Desert Heat, his first DTV effort after he was exiled from movie theaters.

Despite a virtual all-star/all character actor cast, Desert Heat is a dud that’s pretty hard to sit through. The plot is yet another tired run-through of Yojimbo (1961), or, if you prefer, A Fistful of Dollars (1964), or perhaps Django (1966), Savage Dawn (1985) or the more recently-released at the time Last Man Standing (1996), or any other possible options. This movie adds nothing whatsoever to the tale, it’s just a tired rehash. At least similar DTV films like Steel Frontier (1995), Digital Man (1995), or Missionary Man (2007) tried to inject something different into the formula. Desert Heat - which based on its forebears should have been called “Desert Man” - does no such thing. 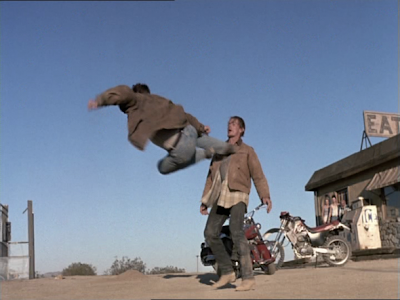 The whole outing starts on an irritating note and it’s hard to recover. It’s Van Damme spewing a bunch of nonsense as a “tilty-cam” swirls around him. It was the late 90’s after all, so there had to be things like this, and the fact that the movie is annoyingly self-aware (a character asks Dottie if she wants to go see Yojimbo in the theater...groan) hurts the final product. Desert Heat is populated with underdeveloped characters you just don’t care about, and, coupled with the movie’s lack of any originality whatsoever, makes it lose any kind of force or interest for the viewer.

After the intro, which will unfortunately remind viewers of Bloodmatch (1991) of all things, it never seems to gain much momentum and it’s easy to see why director Avildsen took his name off the movie (even though it’s still in the end credits anyway - just another facet of the shoddy nature of the film). From Rocky (1976) to Desert Heat? Interesting career trajectory... 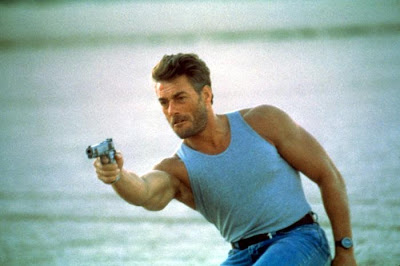 As far as the baddies, there are some familiar names - Larry Drake, Jeff Kober, Paul Koslo and Gregory Scott Cummins, among others. That’s one of the real shames of Desert Heat. It took a killer cast and reduced it to this crud. There are even a handful of potentially cool scenes - but if you don’t care about the characters or their plight, they don’t amount to much.

Apparently, Van Damme’s behind the scenes meddling caused the mess we see today. Just what he wanted to change, why he thought the version after the changes was better, or how he was allowed to have that much power over the final film remain unanswered questions. But the end result is that Desert Heat is a slog and one of the weakest Van Dammes.

In my opinion, this is another movie which is average, not bad. Yes, it is a remake, but at least there is lots of action, and it is competently directed. It's not bad on the level of Black Friday (2001) or Future Fear (1997). At the time, however, it was a disappointment to see Van Damme slip into the DTV category. In Europe, the movie is known as Inferno, which is even hotter than Desert Heat, isn't it?

I very strongly disagree with you on this one, I had a lot of fun with Desert Heat, the cast was pretty good and the action was fun and I liked the film's self-aware, for me it was far better then a major dud like "In Hell".

Had no idea that Van Damme meddled behind the scenes though, I never would've known it watching the film, nothing really gave off the impression of meddling to me.

Didn't realize this was a remake either?

Roger: Will definitely avoid those Daniels flicks...heard they were pretty light on action\weak.

Venom: Have to disagree with you on this one. This was a tough sit...there's no need to remake Yojimbo\Last Man Standing with Van Damme. Thankfully, Van Damme's newest movie, Enemies Closer looks solid.

I found this one extremely dull. It's actually very well directed and shot but the story is boring. Weirdly I'd have enjoyed this more if the film was poorer and there were some stupid or daft moments. Boring and competent is the worst possible mix of film elements.

Totally agree, it this wasn't so dull as dishwater and more weird, it would have been fun.