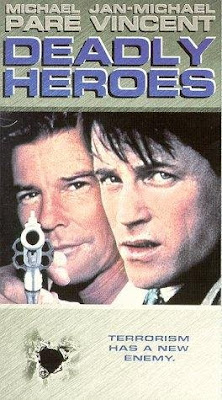 
American hero Brad Cartowski (Pare) is vacationing in Athens with his wife Marcy (Mink) and young son Paul (Dean Bloch) when a band of terrorists storms the airport, hijacks a plane and takes everyone hostage. They demand the release of their imprisoned leader, Jose Maria Carlos (Drago), who’s not just a terrorist, but also a creepy pervert. The USA actually gives in to their demands and Carlos is released. The terrorists then get away - but Marcy Cartowski is left behind with them. Carlos “falls in love” with her instantly and holds her captive in his mansion.

Meanwhile, Brad teams up with hard-nosed fellow ex-Navy SEAL Cody Grant (Vincent) to hunt down Carlos and his terrorist gang and save his wife. Will these heroes be as deadly as promised?

This movie is an exercise in silly, implausible action that’s a lot of fun to watch, but it overstays its welcome at a punishing 104 minutes. The movie, in the second half, becomes repetitive, seemingly for no other reason than to needlessly extend the running time. Perhaps this was an attempt to seem more like a Hollywood movie, which are usually longer than DTV product. This was a mistake, because had Deadly Heroes been a tight 80 minutes, it could have joined the pantheon of greats (at least as far as silly action movies are concerned), joining such movies as American Kickboxer 2 (1993) and Night of the Kickfighters (1988). But a lot of the sense of fun dissipates towards the end. 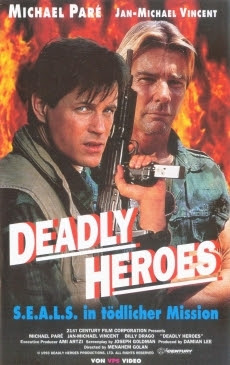 The terrorists with the plastic guns at the airport, the fact that Jan-Michael Vincent wears sunglasses almost the whole time, stock footage, funny, glaring continuity inconsistencies, and the stellar performance by one Dean Bloch as the young Cartowski (sadly his only screen performance to date) would seem to indicate a laugh-out-loud good time. Also the utterly ridiculous “stylized” face paint Pare and Vincent wear and the appearance of “mini-subs” (don’t ask) contribute to the wackiness.  Indeed, these are all good things, but the overlong nature of this odd duck of a movie (even the title hints that something is a little off-kilter) doesn’t help matters.

Naturally, there is the torture scene with Pare, who’s at his wooden best, and the supposedly tough Vincent, who barks all his lines, seems a bit confused.  Drago, whose expertise is playing baddies, really goes to town here as the evil terrorist/murderer/molester/kidnapper/hijacker/rapist. We always say a good action movie needs a strong bad guy, and, well...here you go.

While on the plus side it’s great to see Pare, Vincent and Drago all in a movie together, and there are some standout moments of unintentional comedy, some missteps along the way make this a mixed bag.

Yeah for such a strong cast, this movie was a tad dissapointing, not a whole lot in the way of action and the middle section drags on a bit. For me Billy Drago's best performance was in Delta Force 2 as Ramon Cota.

Aaahh Menahan Golan. lol. What else can you say?

Awesome review though. Believe it or not, despite the long running time I might actually enjoy this one. Go figure.

Venom: Agreed, this should have tighter and not so slow...this is Cannon! Also agree about Drago. He was at his best in Delta Force 2.

RobotGEEK: Thanks! Haha, Looking forward to your take on it. Great title and cast, but it should been better.

Pretty crappy film despite the great cast. By the way, I just noticed that the most expensive-looking action scenes (explosions, scuba diving scenes etc) were lifted from The Finest Hour, a Gulf War drama made couple of years earlier.

I don't remember much about The Finest Hour other that star Rob Lowe had awesome moustache in it.

Anyway, I have a feeling that Golan got hold of the war scenes from that film and just decided to direct a new movie around them.

Thanks JT! That's the kind of info we're looking for. It's a shame Rob Lowe's 'stache didn't make it into the movie like Treat Williams dressed as Arnie (From Last Action Hero) in Gale Force.

I've just been enjoying the "On Deadly List" episode of your podcast. This film is unforgettable based on the plastic guns alone.

Happy the remember you the plastic guns, it's been awhile since we've seen this one. Thanks for pointing that out!

Also thanks for being a listener to the podcast.