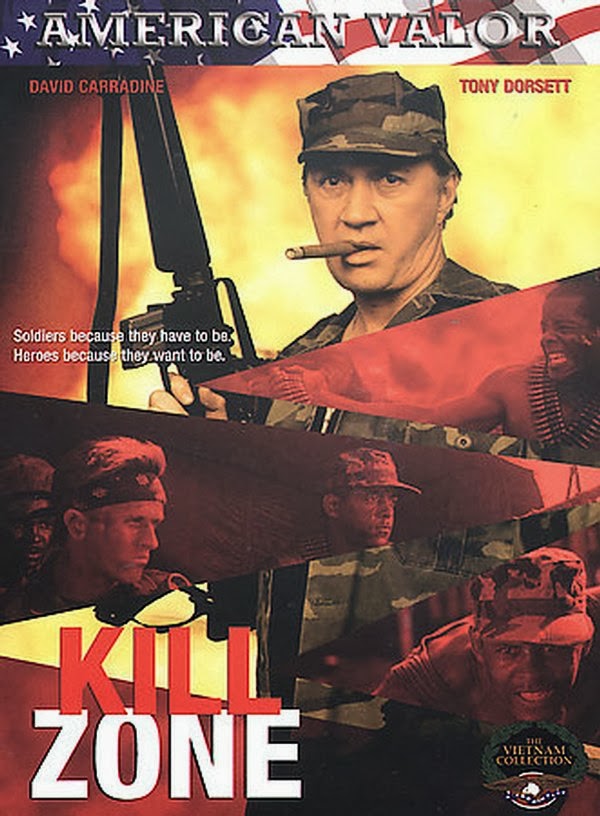 
In the thick of the Vietnam war, Col. Horace Wiggins (Carradine) is bent on the total annihilation of the enemy. He gets into disagreements with other military personnel about how to proceed executing the war. Wiggins is a hard man to deal with. When Wiggins disagrees with the soldiers on the ground, he goes into the firefight himself. Not only are there conflicts between the good guys and the enemy, but also the military brass and the soldiers. With all this conflict going on, will anyone ever escape the KILL ZONE?

Another day, another exploding hut. Amazingly, this is yet another jungle slog that brings nothing new to the table. It all feels very familiar, because the footage we’re watching actually IS familiar, as it’s edited from other Cirio jungle classics. Actually it’s a bit unfair to say there’s nothing new. The name “Horace Wiggins” is pretty awesome. And Carradine brings a new level of incomprehensibility to the role because he says most of his lines while trying to keep a cigar in his mouth. It’s hilarious to watch him try to multi-task like that. Despite his inspired name, his unintelligible mush-mouthiness detracts from what could have been a razor-sharp performance.

We kid the Carradine-ster, but this movie would be unthinkable without him. Take him out of the equation, and you would have, as I believe the saying goes, “bupkus”. He actually really comes alive towards the climax of the movie. He sports a (not the most flattering) tanktop, dons a doo-rag with a skull and crossbones on it (because now he means business, you see) and starts growling like an animal. It’s this type of energy that should have been going on the whole time in this movie. It seems they saved it all for the very end. Shame, really, as that would have lifted this particular guard-tower-fall/hut/jungle movie above the rest. 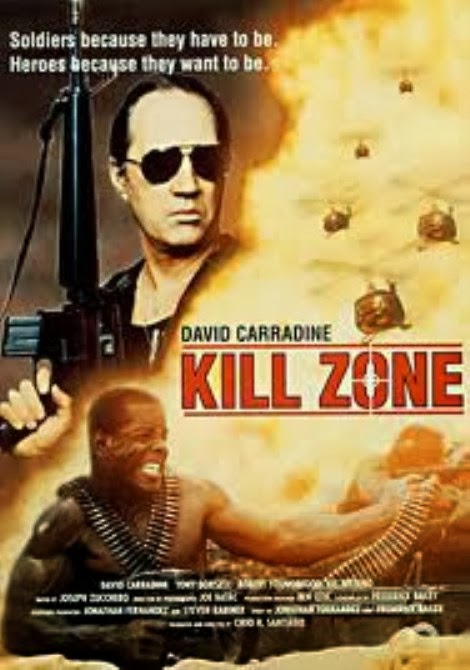 But the Corman/Cirio jungle slogs are the blandest. The best ones are the Italian ones. Yes, we’ve seen so many of them, we can actually define the subtle shades of the multifaceted jungle slog movie. It’s like a fine wine or cheese. The Corman/Cirio outings are all consistent but mediocre. The Italian ones are more vibrant and have more ideas. The problem here is, as an audience, you don’t CARE like you should. There’s absolute zero on the character development front. If we maybe knew who these people were or there was an iota of backstory, we might care, but no. Apparently that crucial element that would turn the tide in their favor was too much to ask from these filmmakers.

Also check out a review by our buddy, DTVC!

I didn't think this movie was bad, just average. Then again, I'm a sucker for jungle slogs. The Devastator might be the best Cirio.

I enjoyed this film because at the time I saw it I was not aware that many of the actions scenes were lifted from other films.

Roger: Yeah, agree that The Devastator is one of the better Cirios. Same with the very similar Final Mission.