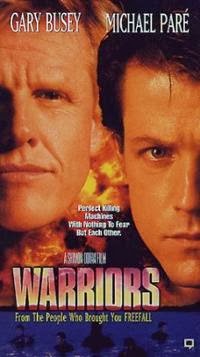 
Frank Vail (Busey) is the head of a team of government assassins. Apparently these guys are crazy, but they’re also effective, so they’re kept in a loony bin/barracks. When Vail escapes the compound, and takes a prostitute (Fulford) along for his joyride, a man equal to his skill in killing power is sent to stop him: Colin Neal (Pare, looking a lot like Matthew Broderick here). So now it’s a man-against-man chase to see if Neal can take down Vail. Will he do it...and will anyone care?

Warriors is not a good movie. Nu-Image strikes out again with this overlong, uninteresting, unengaging turkey. It’s Busey and Pare at their worst - it truly is “stupid” vs. “wooden” in this audience-testing, unnecessary production.

We’re trying to find worthwhile things about this movie, and it is technically well-done, and there’s some interesting cinematography. But that’s it. It has no energy and it’s not paced and plotted like an action movie. It’s unbelievably talky and slow - it’s hard to imagine a SLOWER pace - and it’s droll, dull, and insults the patience and intelligence of the audience.

What’s really annoying about Warriors is how it tries in vain to be “different” for different’s sake. For example, during many of the too-short “action” scenes, there’s no music behind them, and maybe the camera is doing something self-consciously wacky. Sure, these things might be different, but there’s a REASON no one has done them before. Because they don’t work. Why did they not think of this? Answer: because they were trying to be clever. That’s a big mistake when making a movie. Don’t try to be clever. Try to be good.

Sure, there may be some blow-ups and shooting, but that doesn’t an action movie make, and director Dotan, who also directed Diamond Dogs, continues his tradition of mediocrity. But he got better, because Diamond Dogs doesn’t outright suck, like Warriors. Plus, weren’t they aware of The Warriors (1979)? They really couldn’t come up with another title? This movie besmirches the Baseball Furies and all they stand for. 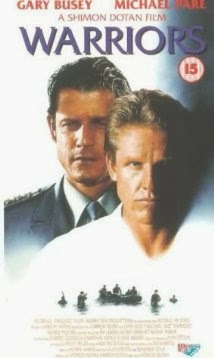 The whole concept makes no sense: if these guys are insane, the army would never employ them to do serious jobs. For the concept of “mano-a-mano” fighting, check out The Final Sanction. It’s a similar idea, but done in a much more entertaining manner. And probably on a much lower budget as well. Warriors is just overly serious and bleak.

It’s hard to imagine the filmmakers writing this and assuming the audience would really care. And when the pace is just like a lazy old river that kind of just rambles along with a total lack of verve or edge of any kind, you just can’t help but check out.

While stuck in the thick of this movie, you think it will never end. Eventually it does, and you just feel cheated. It’s a Nu-Image movie called “Warriors” with Gary Busey and Michael Pare. Naturally, fans will think this is an action movie. But we were cruelly tricked. This is deception; false advertising even. We can’t forgive that. It’s like director Dotan had never seen or heard of an action movie before, but was told to make one.

He didn’t have a grasp at all on how to make an effective action movie, or movie of any kind, really. He probably figured his director of photography would carry him through. But you can’t slap a new coat of paint on a rotting house that’s about to collapse into a pile of dust. 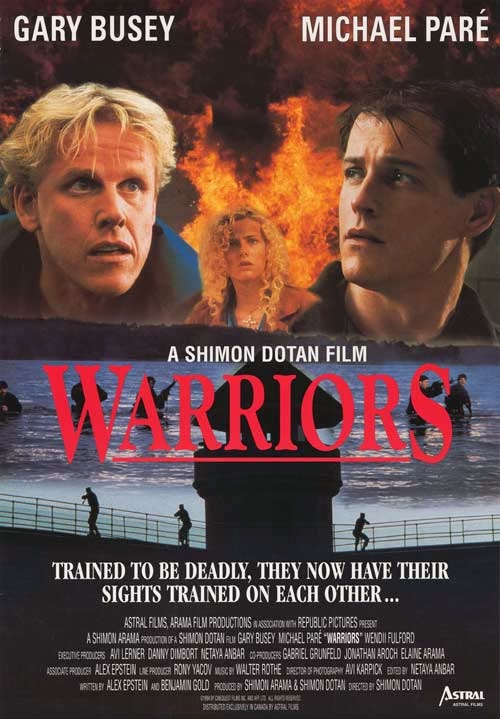 Finally, we’d just like to say that Warriors fits into the “Pushing Tin” theory of box/poster art. This theory (that we invented) states that any movie art that features gigantic faces of either the two leads (or in some cases, a massive face of just the main star) means the movie will not be very good. Because the level of creativity on display is inherent in the artwork. If the best anyone can do is one or two massive faces, that’s a really bad sign. So red flag number one were the two box-filling mugs of Pare and Busey.

Warriors is a must to avoid.

It makes me wonder what goes through producers' minds, like they either have the need to blow through money, or they need to make some sort of tax deduction.

What's frustrating is that there probably are quality scripts floating around that can't get produced for whatever reason, yet drivel gets green-lit consistently.

Can't agree more. They're are well-written scripts not being made. Poor Pare and Busey...it could've been decent, but it was just slow, weak, and a waste of time.

Shame. It's been on my list for a while. Too bad the combined powers of Busy and Pare couldn't save this...

Very unfortunate. Busey and Pare are usually entertaining. The script is so bad and the direction so lifeless, you can't enjoy it at all.

I didn't totally hate this movie(i'd give it a ** myself, as Pare and Busey were decent enough) but I will agree that it did get rather boring at times the action scenes were rather uninspired.

Normally I quite enjoy Nu Image films, but this one just isn't very good.

This was a dud. Agree on Special Forces. That was well-made.