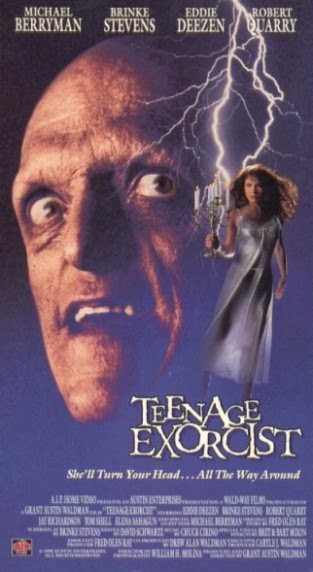 Her sister Sally (Sahagun), her husband Mike (Richardson), and a potential college boyfriend (Shell), along with Father McFerrin (Quarry) and Deezen, the pizza delivery boy, all cavort around the house trying to get Diane back to normal. After some hijinx involving a demon (Darrow) and a bunch of zombies, something ensues - but is it hilarity? Find out, if you dare.

I’ve never really been a fan of horror comedies. With the possible exception of Dead Alive (1992), usually they just seem like excuses to be neither funny nor scary. However, AIP seems to like them, having released this, and the very similar Speak of the Devil (1991) in the same year. Both have evil stuff lurking in the basement, and neither of them are that funny. But of the two, Teenage Exorcist is better.

For one thing, the cast seems to be having fun. Unfortunately, it’s not contagious for the audience. You do almost crack a smile a few times, but only because the humor is so old-fashioned. It’s almost vaudeville, and seeing as how Brinke Stevens is credited with the screenplay (although it was co-written with Ted Newsom, though he was uncredited because of a Writer’s Guild issue. I learned this from listening to the DVD commentary. And to answer your questions, yes, there is a DVD. And yes, it has a commentary track. And yes, I listened to it.) - unless she was over 80 years old or so at the time of writing (and looking really good) - it’s kind of inexplicable why the gags seem like they should be from such an earlier vintage. 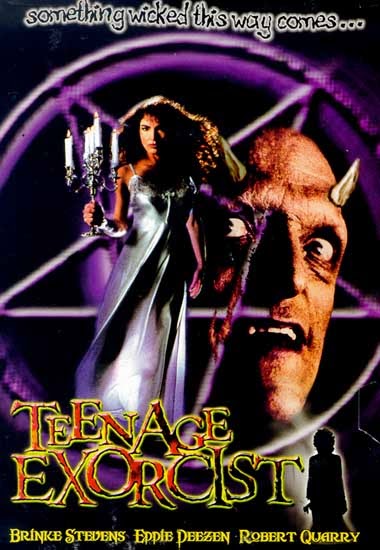 So that makes Teenage Exorcist sort of a cross between Abbott and Costello Meet Frankenstein (1948) and Repossessed (1990), what with its old dark house and exorcist jokes. Also to the movie’s credit is the fact that it has a title song, a very catchy pop-metal ditty that would seem perfect for Hardcore Superstar to do a cover of. Elsewhere, it has a jaunty score underscoring such scenes as Brinke’s milk box inflating and deflating (a sure sign evil doings are afoot), and her carrying in her mustard in a big brown box as she moves into her house.

But it does its best with its low budget - it all takes place, for the most part, in one location - the house (it looks like the house from Mirror Mirror 3 (1995). Even some of the end credits are first names only, kind of underscoring the buddy-buddy vibe. And, of course, when the first credit before the title of the movie are the words “Eddie Deezen in...” you know you’re in for a treat (?) But it also has Hoke Howell of Action USA (1989) fame, as well as Sahagun of Ring of Fire II (1993) and Tiger Heart (1996) fame. For a proposed first version of this movie, Fred Olen Ray made a trailer only, and it has Cam Mitchell. Too bad he couldn’t appear in the final version.

So while the title is a misnomer (there is no teenage exorcist in the film - there was supposed to be, but in an inexplicable casting decision, the teenage girl was replaced by Eddie Deezen!), if you’re in the mood for some good-natured mediocrity with a mild sexy edge, Teenage Exorcist could just be the movie for you.

Personally i'm a big fan of horror comedies myself, (looking forward to seeing A Haunted House 2 this year) Dead Alive is ironically one of the few horror-comedies I didn't particularly care for, it just wasn't funny to me.

Though I did find this film funny, though as far as exorcism comedies go, "Repossessed" was funnier.

Ah, yes. This is a fun one. Great theme song too. Got to love Fred Olen Ray in his heyday!

Haha! Got to love Fred.