Apparently in Angola, buried mines are a serious problem. There has been a civil war going on for over 30 years between the government and the rebels. American Jack Randall (Bergin) and his annoying jerk son Tom (Petronijevic) are working there trying to discover the mines under the ground and deactivate them. A local named Gabriel (Lovinga) and the token hot chick, Kat (Muschallik) are helping them out.

When the rebels get out of control and become dangerous, the group must flee to the Namibian border, along with Kat’s mother, a physician named Hildy (Nosbusch). An evildoer named, of all things, VanDamm (Roberts) is acting as General to the rebels. With mines aplenty and danger at every turn, will our heroes reach safety?

Don’t be tricked by the title or box art. You’d think a movie called “High Explosive” would be awesome, right? Instead, it’s a weak, boring, tame tale, and you’ve seen it all before a thousand times. It seems like a TV movie commissioned by Amnesty International or even the wretched UN. There’s no excitement, and you don’t really care what happens to the characters. Especially the super-irritating son (which is just a cliche by now that the filmmakers naturally stepped into) who gives Esteban Powell a serious run for his money.  Sure, there are some blow-ups, and maybe a violent incident or two, but they can’t possibly hope to make up for this tough sit. 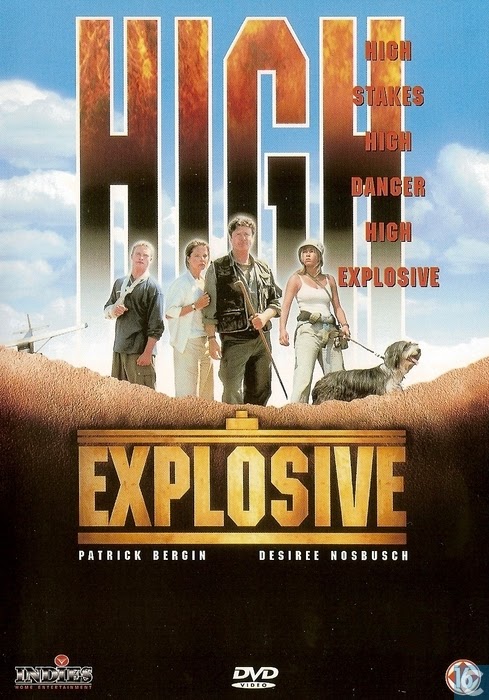 Of course the main baddie (who’s not in it enough, established well enough, evil enough, or dealt with properly enough) is blonde - that’s a nice shortcut to tell the world you’ve got an evildoer on your hands. But despite being a ruthless, sadistic dictator, he’s partial to breaking out his electric guitar and rockin’ out all by himself.

When VanDamm (groan) did this, it proved to be a movie highlight. We know, it’s not saying much. But the forces of good are led by an equally weak force - Patrick Bergin is just an odd choice for the “action hero” role, as he’s looking a bit chunky with his expanding gut, as well as his hat with the comically wide brim.

Sure there are flaws galore, but it’s shot well so there’s some semblance of quality, at least visually. But there are problems infesting everywhere else in this slog.  One of the main problems is that they tried to split the difference and came up with nothing: As a PSA-like politically-correct cautionary tale, there’s too much violence to show in schools, and as an action movie, it feels mishandled and watered-down. So there’s nothing for any side to grab on to. So the best you can really say about High Explosive is that...it’s a movie. It’s definitely a movie, but, eh. 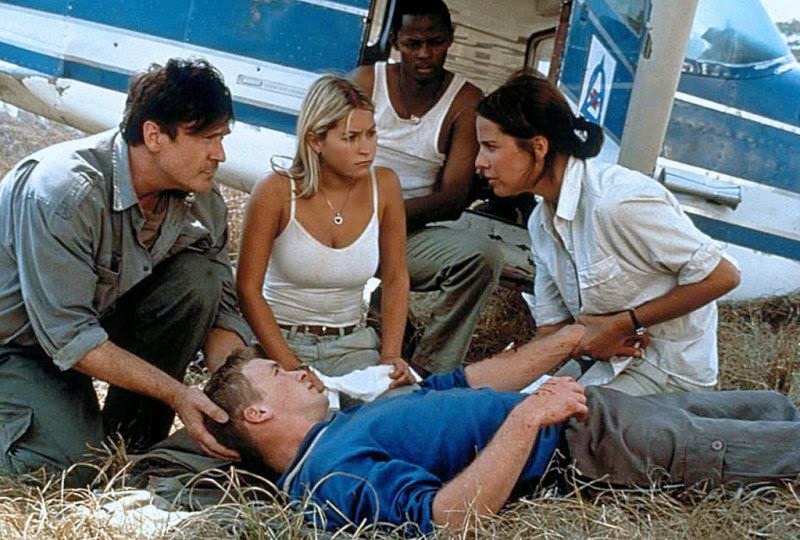 Then after some portentous narration about how hidden mines are disemboweling innocent children, the credits roll with a wildly happy, upbeat and sprightly tune, “Dancing In the Moonlight” by Wozani. It seems odd and inappropriate. Especially in light of the loss of limbs. But Gabriel is definitely a fan, as he dances to the song earlier in the film.

A computer game of Minesweeper would be more entertaining than this movie.

Disagree on this review, I thought it was a decent enough film and I for one did care about the characters

Desiree Nosbusch. No No No!! Haven't seen this. Don't want to see it.

Venom: We highly disagree. This was a piece of junk...this 'Explosive is just a dud...couldn't fit that in the review. Haha.

Harry: Definitely listen to your own advice. Avoid this one...forever.

That's a pretty bad photoshop of Patrick Bergin's head, on the cover.