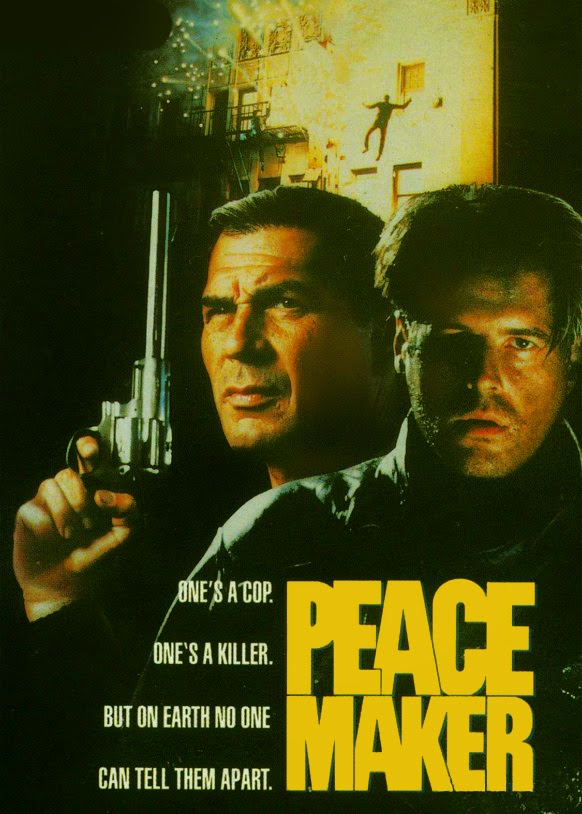 
A mysterious alien lands on earth and is seemingly unstoppable by the cops because on the planet he comes from, any kind of wound can be quickly healed. He ends up convincing Dori Caisson (Shepard) to help him get back to his home planet. Learning English overnight from watching TV, he ends up calling himself Townsend (Edwards). You can’t really blame him, Robert Townsend was huge at the time. But there’s trouble in the form of fellow alien Yates (Forster), who Townsend claims is an intergalactic serial killer and must be brought back to justice.

But it’s not going to be easy, as the two are causing all sorts of havoc all over L.A. But who can Dori trust? Both claim to be “Peacemakers”, their planet’s version of police officers. One must be lying, and Dori is caught in the middle. Meanwhile, Sgt. Ramos (Davi) is trying to put law enforcement into the middle of this mess, all the while hitting on Dori. Who is the real Peacemaker? Find out today!

Fries Home Video was never a major player back in the video store days. They were just one of many labels vying for the patron’s dollar. Peacemaker seems to be their attempt at competing with very similar but higher-tier titles like I Come In Peace (1990), The Hidden (1987), The Borrower (1991) and even Critters (1986). Plus Lance Edwards’ accent and overall demeanor is unquestionably Terminator (1984)-esque.

Thankfully, it’s all done with enough energy, enthusiasm and humor, ensuring that this movie is not a slog at all; it’s actually quite enjoyable. In our personal estimation, one of the main reasons for that is that it’s more of an action thriller, and the sci-fi elements, such as they are, aren’t oppressive, they’re just enough to support the plot. Stunts (courtesy of BJ Davis and Mike Norris, among many others), chases, shooting and other action scenes firmly place Peacemaker in the action camp, and we’re grateful it weighs more heavily on that end of the scales. 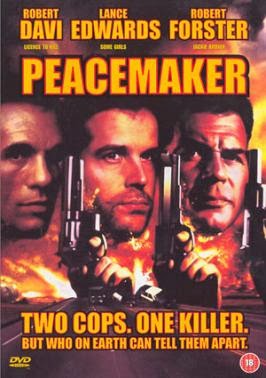 Robert Forster looks cool with his bomber jacket and giant gun, and fan-favorite Robert Davi puts in an interestingly low-key performance. We were also very thankful that the character of Dori was not annoying. So many times before we’ve seen situations where that type of character is always irreparably confused or whining the whole time.

But Dori is likable, perhaps because she was a classic 90’s-style jokester. 1990 was when having a wry, referential and somewhat cynical sense of humor was cool, before it became overdone, and before things were dripping with irony.  Dori, like the movie itself, hits that sweet spot before things went to hell because of MTV and such. Come on, apparently this movie was made at a time when cops at the precinct still smoked pipes for goodness’ sake. Pipes!

Well, at least one guy did. This “PipeCop” as we called him, intrigued us and we wished we knew more about him. Perhaps a spinoff TV show would have answered all of our questions. Sadly, to date this has not happened. But with Hollywood dredging up everything from cartoons to board games because they’re bereft of ideas, hasn’t PipeCop’s day truly come?

Peacemaker is well-made and fun to watch. While they may have overdone the twist of “who’s really the bad guy?” (you can’t keep doing that over and over - it would have been more effective if they had done it less, in our opinion) there are far more positives than negatives here. We say check it out.

Also check out write-ups from our buddies, DTVC and RobotGEEK!
Posted by Ty at 29.5.14

Sounds pretty good, and anyways i've got no problem with Hollywood making films about board games(quite enjoyed Battleship) and cartoons(loved the Ninja Turtles films and looking forward to the new ones)

It's a good movie and you gotta love Davi and Forster.

great write up. i love this flick: high energy, great stunts and a whole lot of fun.

Joe Bob Briggs raved about it, so gave it a shot. The action and stunts are amazing, give it an A. Some silly bits or plot holes are all I have for gripes. Forster's just an awesome actor, too.

Agreed! This was a lot of fun. Killer stunts, Robert Forster is always good. Check out The Banker and American Perfekt for more solid Forster.