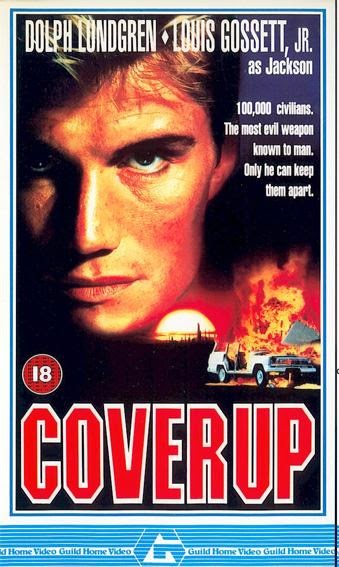 
Mike Anderson (Dolph) is an ex-Marine, now an investigative journalist based in L.A. He travels to Israel to try to get the story on some murders at a military base. A terrorist group called Black October is claiming responsibility, but is that the whole story? Anderson also is attempting to get to the truth through CIA operative Lou Jackson (Gossett Jr.). It seems Anderson is getting close, because several attempts are made on his life. He must uncover the conspiracy before it’s too late. Can he do it?

It seems Cover Up was an attempt by Dolph to do something a bit more “respectable”. There’s certainly nothing wrong with trying to change things up and attempting to break away from typecasting  - it’s just that Cover Up is kind of on the dour, dark and dry side. He’s more than entitled to try something different, but it’s just a shame that it’s this - because it’s still trying to keep one foot in the action world with some blow-ups, and maybe some mild shooting and fighting - but it’s not entirely a straight drama either. Despite the more serious-minded tone of the film, Dolph still manages to appear shirtless for no apparent reason. Some things can’t change, apparently. 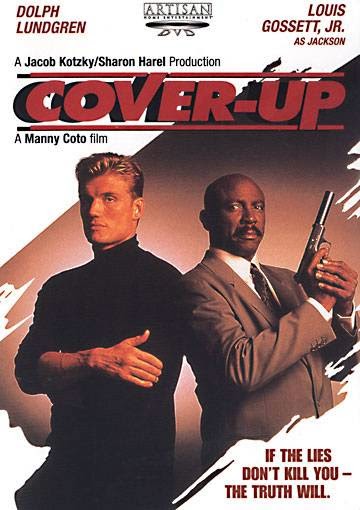 If Dolph really wanted to break away from the cycle of action movies he was doing at the time, he probably shouldn’t have re-teamed with Louis Gossett Jr. after The Punisher (1989). Not that we mind, of course, they make a fine team, but what action remains in this movie is too close to his old work, yet not far enough away to separate himself from it. In Dolph’s defense, it’s a tough line to straddle. And he does look very cool with his cigar. It really makes you think Gossett was supposed to appear in The Peacekeeper (1997) to make a Dolph/Gossett trilogy, but instead Montel Williams of all people showed up to fill the role.

A good example of how this is an atypical Dolph movie comes when there is a scene in a pool hall, and all they do is talk and play pool. In any other movie, punches, kicks and pool cues would be flying. But Mike Anderson is a reporter, you see, not a fighter. Although he is “ex-military” (classic cliche we all love). So what about that? Presumably it explains what fighting does occur later in the movie. 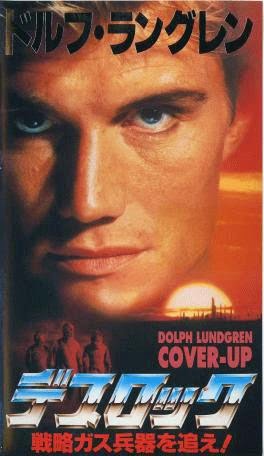 The Israel locations are some of the highlights of the movie (and are shot very well by the cinematographer). The King David hotel, and the Church of the Holy Sepulchre, among other sites in Tel Aviv and Jerusalem are on show. The climax during the religious procession also gets the local flavor very well. Cover Up may be lacking in overall excitement, but as a travelogue there’s certainly something to see.

To keep things in perspective, Cover Up is much better than The Last Warrior (2000), Agent Red (2000) and Detention (2003). Cover Up is really not even a bad movie, just a bit on the dull side. Dolph seemed to realize this, because he came roaring back into classic form with his next movie after this, Showdown In Little Tokyo (1991), one of his best and a Comeuppance Reviews favorite. Dolph fans will still appreciate Cover Up, and it makes a good one-time watch.

I just rewatched this a couple of weeks ago. Your review is spot-on. Dolph is quite meathead-y in this one, bumbling and stumbling to find the clues to the plot. Recently released on widescreen DVD in Germany with good picture quality.

Thanks. Dolph acts like a real dummy in this. Not his best moment. Haha.

Saw it after "The Punisher". So I was a little disappointed.

Totally understandable. The Punisher is one of the best Dolphs. Cover-up is one of the weaker ones. Not as bad as The Last Warrior though. Haha.

Boah. Don't talk about "The last warrior". I want to forget it.

I thought this film was kinda average, I found it rather slow-moving and the plot not all that interesting, it's not quite bad like say "Pentathlon" is, but still very forgettable.

Definitely agree. We think Pentathlon was better than Cover-Up. It has that silly moment where the white guy was dancing to the rap music. Haha.