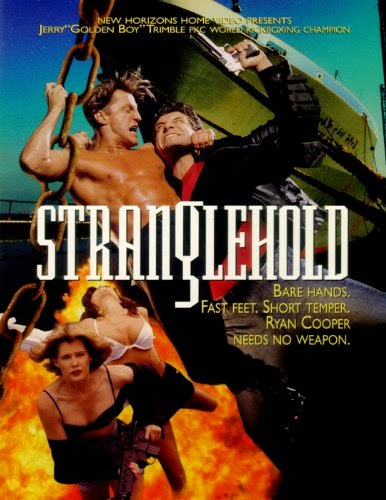 When Ohio congresswoman Helen Filmore (McWhirter) and her staff fly to Kuala Lumpur, Malaysia, to visit Chemco, a new chemical weapons facility, all hell breaks loose when terrorist Richter (Wells) and his goons commandeer the place and take Filmore and her staff hostage. Luckily, she has a badass bodyguard with an attitude, Ryan Cooper (Trimble). Cooper singlehandedly must take down the baddies and save Filmore. But with Richter’s goons at every turn, can he do it? Find out today!

Stranglehold is yet another addition to the 90’s “DieHardInA” sub-genre that we’ve covered extensively on this site. Lethal Tender, Deadly Outbreak, Crackerjack and many others populated video stores with scenarios oddly reminiscent of the Bruce Willis film.

Thankfully, our main hero this time around is the inimitable Jerry Trimble, who looks like Sean Penn in a bout of ‘Roid Rage. (Interestingly, he resembles Penn when he’s wearing his suit. When he changes to fatigues - he only has two outfits in the movie - he looks more like Emilio Estevez. Go figure). Nevertheless, Trimble has a great voice, and it sounds a lot like Reb Brown’s. It’s highly enjoyable to watch him fight baddies and shoot one-liners. And more baddies. To quote the tagline: “Bare hands. Fast feet. Short temper. Ryan Cooper needs no weapon”. That’s all you need to know, really. 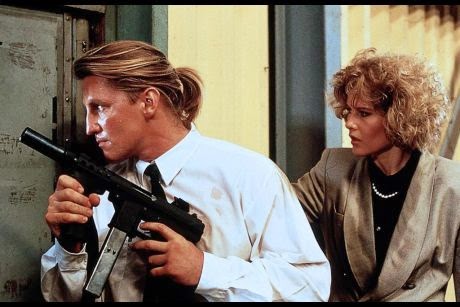 Besides Trimble and his ponytail, and his utterance of lines such as “Maybe a diet sandwich?” to a portly compatriot (we think Trimble may have unwittingly invented something awesome here. But we suspect he does a lot of things unwittingly), there are some other B-movie greats onboard. Jillian McWhirter, who we knew from Beyond the Call of Duty (1992) and the great PM movies Last Man Standing (1995) and Rage (1995) is good as the congresswoman.

And we always love to see Vernon G. Wells, and here he puts in a wonderfully hammy performance as the bad guy with the prerequisite German name. And because it’s a Cirio movie under the Corman auspices, the running time is only 73 minutes! So it’s easy to fit this one into your movie-watching schedule.

The shooting and kicking in an industrial scenario, exploding things, not the least of which is at least one helicopter, and the keyboard-based soundtrack will feel nicely familiar to action fans and it gives the movie an 80’s feel. On the whole, we enjoyed Stranglehold, because there’s nothing NOT to enjoy. It delivers action goods in a compact package, and we applaud that.

This is my personal favorite of Trimble's films, another interesting bit of Trivia, blaxploitation star Jim Kelly appears as one of the board members.

I just caught the trailer. This has "rainy Saturday afternoon" written all over it.

Thanks! You will definitely enjoy this. You're right. Perfect rainy day movie.