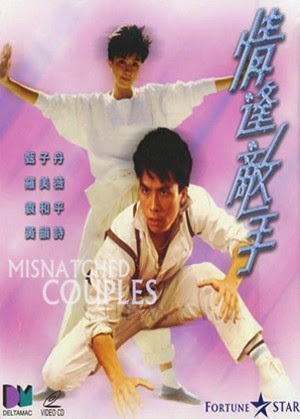 Eddie (Yen) is a happy-go-lucky guy who loves breakdancing and Martial Arts. He lives with his stern sister Ah Ying (Wong) and the cute Stella (Mei-Mei). He has a geeky friend named Mini (Woo-Ping), whose clumsiness and awkwardness is always getting him into some kind of wacky trouble.

Seeing as Eddie loves the beautiful Anna (Anna Kamiyama, in her only film role), Mini loves Ah Ying, and Stella loves Eddie, many mishaps ensue in their respective quests to win their desired mate. Meanwhile, Eddie faces challenges in his two hobbies: Kenny (Perez) wants to beat him on the dance floor (and the tennis court), while the batty and maniacal Fight Champion (Wei) wants to fight Eddie in the ring. How will Eddie and  Mini navigate all this? Will everyone end up with who they want to end up with? Find out today!

It’s kind of hard to put into words just how awesome Mismatched Couples is. It’s loaded to the bursting point with upbeat, high-energy, colorful, happy, funny scenes that work overtime to try and please the audience.

On top of that are highly impressive physical feats relating to the dance scenes as well as the Martial Arts scenes. Director (and co-star, as the bespectacled Mini) Yuen Woo-Ping, gets the most out of every scene, which, one after another, are just delightful escapades that are just wildly enjoyable. It’s easy to see why he’s well-known now. His skills are evident even in this early outing. The same goes for Donnie Yen, who is at his absolute best here. 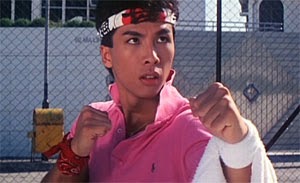 We’re always championing Martial Arts movies as well as 80’s dance movies, and, amazingly, we found a movie that combines the two! In other words, this very well could be the perfect Comeuppance Reviews movie. The music alone is very entertaining (as are the sound effects). Add that to everything else, and you have a super-winner.

In America, in the 80’s, we had comedies like Ferris Bueller’s Day Off (1986), among the steady stream of  other John Hughes movies, among many other examples. Now cross that with Breakin' (1984) and Breakin' 2 (1984), and Mismatched Couples is in some sort of context. 'Couples should be ingrained in the minds of everyone as a solid, mesmerizingly 80’s comedy, and the only reason it’s not is simply because it comes from Hong Kong. It absolutely deserves to be in the firmament with all the others, as it preserves a very sweet moment in time, with no apologies. 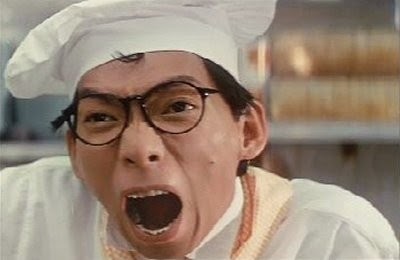 There’s so much more we could say about this movie, but we want to keep things to a “Mini”-mum (heh heh) because we want you to discover the charm of Mismatched Couples for yourself.  We loved it and we know you will too. It gets our highest and most enthusiastic recommendation...just see it!

Which other movie reviews got a perfect score on this site? Just curious.

Thanks! We appreciate that.

Seems like this one is a bit hard to find on video, it's currently unavailible on DVD on Amazon in the U.S., and a VHS copy runs over 80 dollars.

Surprised that this is so expensive. It shouldn't be.

Where did you get this film from?

My brother had a copy on VCD.

Haha! He had breakdance fever!

You can get it at far east flix dot com...got mine today!!