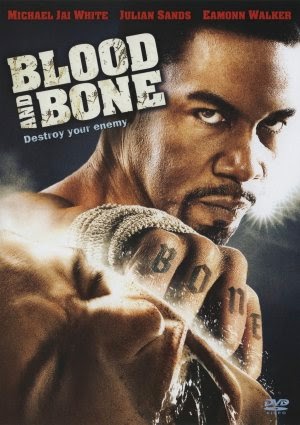 Isaiah Bone (White) gets out of prison and ends up renting a room at an L.A.-area house run by Tamara (Gaye). Bone is a quiet and mysterious man, and we don’t know much about his past. What we do know is that he’s an outrageously talented fighter, and he proceeds to get involved with the illegal, underground Punchfighting circuit.

Immediately recognizing that Bone is head-and-shoulders better than the normal street thugs, charismatic fight promoter Pinball (Basco) takes him under his wing and Bone moves up the ranks. This puts him in the sights of James (Walker), a high-class thug with aspirations to join the ranks of the ultra-wealthy, as represented by Franklin McVeigh (Sands). James also recognizes Bone’s fighting talents and wants to use him to break into the really big time. But Bone has his own reasons for doing what he’s doing, and only his strength and personal honor and integrity guide him through his mission. But will he make it out alive?

Blood and Bone is as good a movie as you could possibly hope for in the world of the modern-day Punchfighter. There’s just enough depth and interesting things going on with the plot and characters to raise it above the muck and mire of the “I-punch-you-you-punch-me-and-that’s-it” Punchfighters out there. Seemingly, it’s a movie out of time, as we felt this could have come to the movie theater, had it only been released in 1997 or so.

The only things that mark it as new are some brief - but still unfortunate and unnecessary - uses of CGI. Otherwise, the plot has a nicely familiar feel, and Michael Jai White makes a powerful hero.

As for MJW, we’ve always been huge fans. His Martial Arts abilities and screen presence have only continued to improve since Ring of Fire III (1995) and Ballistic (1995), which is rare. It’s a joy to watch him execute his moves. One of the great injustices in life is that Steven Seagal is more of a household name than White. White deserves to be in the action pantheon with Dolph, Van Damme, and (unfortunately), Seagal.

His appearances in two of the Universal Soldier movies make sense towards that aim, but it seems MJW is primarily known in the action community. We feel he deserves wider recognition. As for fellow fan favorite Gina Carano, she has a criminally small part. It would have been awesome to see her team up with MJW to take down the baddies. Maybe someday that will happen. 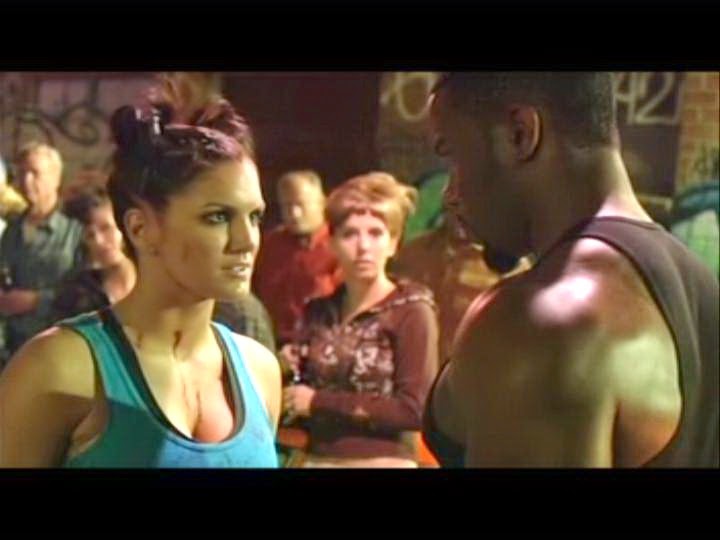 As for Julian Sands, you might ask yourself as to why he's in an urban-themed modern-day Punchfighter. His one scene where he verbally faces off against James should answer all your questions. One of the things that make Blood and Bone a worthwhile movie, besides its pleasantly surprising spurts of intelligence at times, is its sense of humor, which is well-portioned out.

We don’t know if this was on purpose, but in a throwback to the Blaxploitation movies of the 70’s, all the Caucasian characters are just lightweight, silly, stereotypical whiteys. The Punchfighter “Cowboy” is just a “redneck” stereotype, the white family that eats dinner with James wear sweaters around their necks and listen to Wang Chung, and Julian Sands is the whitest person on earth. It’s hard to discern whether the tried-and-true plotline and some characteristics of the movie are homages to the past, or just a simple lack of originality. That’s the danger of homages, the audience might misunderstand your intentions. The Hitter and Lionheart seem to be primary influences.

But just as in all great movies, Blood and Bone gets its own title song during the end credits. Seeing as how it’s a competently-made film with just the right amount of depth, and you really have a hero to root for in MJW, we feel that Blood and Bone is one of the better modern-day Punchfighters out there.

Also check out write-ups from our buddies, DTVC, The Video Vacuum, and The Action Elite!
Posted by Ty at 29.6.14

Agreed. Blood & Bone is on a whole upper level compared to recent similar flicks. MJW is awesome. I can't understand why the guy to this day never got the credit and commercial value he deserves. He has mad skills and he's great for action flicks. Hell the guys even has comedy skills as seen in Black Dynamite.

Can't agree more. Michael Jai White should be in more stuff. Maybe have a show on Cinemax where he beats up people.

The prison scene makes this film great by itself. It should have been set entirely in there and culminated in an unsanctioned MMA match between MJW and Slice, with obligatory guards watching and the corrupt warden being wasted at the end.

Not entirely sure why Jai White's failure can be attributed to Seagal and his success? It's not like MJW hasn't been in any top flight movies in his career (EXIT WOUNDS for one?)

Seagal (even on off-days) has more personality and screen presence than Dolph or Jean-Claude will ever dream to have. Lundgren looks really tired, and can't seem to walk in recent movies. Whilst Van Damme looks older than Seagal, and seems content to bore his viewers to death, with his 'thespian' party piece....that should have started (and stopped) with JCVD-THE-MOVIE' (IMO)

Regardless what you think of him personally, Seagal actually seems to be the busiest of them all. He's still cranking out action movies (check out 'A GOOD MAN' trailer....and tell me it looks inferior to any recent DL or JCVD movie?)
MJW can admittedly bust some fancy moves, and spit a few one liners (like Doplh or Jean Claude) but (beyond the muscles) he lacks charisma (Terry Crewes is a similar actor...great in spurts....but forever the 'Bridesmaid')

Seagal has the confidence (or arrogance) to be comfortable in front of the camera (regardless of the results) the other actors don't (and it also helps that you can understand Seagal....when he speaks up, that is)
Van Damme sounds bored (with a thick accent) and Dolph sounds stoned (with a thick accent) That's the distinct difference between them. Seagal (despite the weight) shows no signs of slowing up in his recent movies (and he seems to be putting a lot more effort than his dire 04-07 period) and more importantly still looks the part of a tough guy (albeit heavier) Van damme is shrinking and Dolph can't seem to walk?
And when Seagal's not acting, he's doing his police stuff, or touring with his band.

Seagal (excuse the pun) keeps his fingers in more than one pie.....and that's why he's a household name. The fact that he's wildly eccentric, only adds to his popularity. The other actors are boring.

Sorry for the rant, but I think you're seriously discrediting Seagal, and overpraising the others.

Don't mind the rant at all. Liked that you came to his defense. We like Seagal in certain movies (Fire Down Below and Urban Justice) but he's been lazy too especially in Kill Switch which was a real tough sit. We like Seagals weirdness and most of his whispered line readings. Haha. Terry Crews probably won't get the chance to be an super action star like Seagal or Dolph. Agree on that on that one.

Dolph seems to making some oddball movies at the moment, that look well under $1m budget. And like Crews, if it wasn't for THE EXPENDABLES, they'd probably be doing porn? I'm surprised JAI WHITE hasn't been considered for the franchise (I guess Kelsey Grammer is a more imposing figure in the action stakes?)
The fact that Seagal doesn't care for THE EXPENDABLES, is another factor, that sets him apart from the others. KILL SWITCH (in terms of a DTV timeframe) was centuries ago. The editing, re-editing and doubled did ruin it. Although I've heard that there's an alternate version floating about (closer to Seagals vision)

Did you see 'THE VOICE VS STEVEN SEAGAL' INTERVIEW......Comedy gold, and it seems that Seagal doesn't think much about Jai White's MA skills (so I'm guessing they've fell out after EXIT WOUNDS)

Would be interested to see a cleaned up-better edit of Kill Switch.

Did see that interview. Seagal really doesn't like Jai White. They should patch things up...make another movie.

Heard good stuff about this film. Will have to give it a watch. I enjoyed The Big Hit (which Ramsey wrote) alot.

This is a solid movie. Definitely interested in your take on it. Jai White at his bone-breaking best.