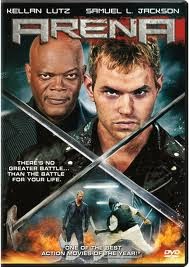 A mysterious, underground fight promoter known only as Logan (Jackson) stages "Deathgames" in which combatants fight to the death. These bloody mano-a-mano brawls are broadcast over the internet and apparently everyone from office workers in Hong Kong to unlikable and annoying frat boys in America find Logan's product wildly appealing. When one of Logan's workers named Milla (Winter) kidnaps ex-Marine and current paramedic David Lord (Lutz) and forces him to fight for his freedom, at first Lord resists.

But then Logan offers the deal that if Lord wins ten deathfights to the death, he can go, and not die. Meanwhile, he's kept in a cell far from the prying eyes of the outside world. It's there he befriends Taiga (Dae Kim), who is in a similar situation as him, but his final match will be against an executioner-type-guy known as Kaden (Messner). Will David Lord be the Lord of the underground internet deathfight circuit?

Arena starts off on a bad foot right from the get-go and never recovers. It's almost like an athlete who's so pumped up that he got the ball, he fumbles immediately, and feels so much pressure to recover and make up time, he sabotages himself and can never really keep up. Right in the first few minutes, we're subjected to CGI-based fights, super-irritating frat characters that we only see from one angle as they watch their precious deathfights, and we discover, to our dismay, that our main hero, the guy we're all supposed to get behind, is a man named Kellan Lutz.

Or possibly Kip Pardue, we're not really sure. Be it Kip, Kellan or Kaden, whatever, you know how it's said that couples that have been together a long time start to resemble each other, or in longtime human-pet relationships, the two start to look alike? Well, it's pretty clear Mr. Lutz has been admiring the Ryan Phillippe poster over his bed for a bit too long. If there's anyone out there who has seen every Ryan Phillippe movie ever made, it's him. While modeling your acting style and career on Ryan Phillippe might not be the world's best decision, if his goal was to be indistinguishable from him, he achieved it. 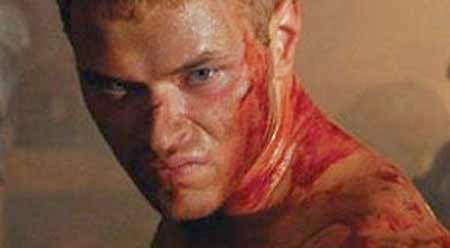 The massive vacuum where a scintilla of originality might have lived is one of the more glaring problems here. This is just another stupid, mindless fighting movie that adds nothing to an already-crowded marketplace. It's filled with cliche-ridden dialogue and plot developments.

Its lack of originality is even evident in its title. There are already multiple movies that exist called Arena, but apparently that didn't bother anyone involved. It's almost like they were trying to telegraph this movie's superfluity to any potential renters. (God forbid there be buyers). Okay, we don't expect total originality here, or anywhere, really, but honestly. The only dialogue we liked was the fact that the name "David Lord" was said like a thousand times throughout the course of the movie. It became funny, in a Malone or Brakus kind of way. If that's the name you're super-proud of, and not much else, there's a problem. 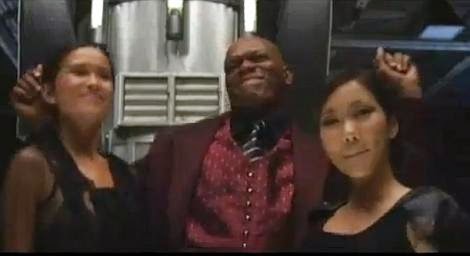 OK, we know what you're thinking, because we were thinking it too: why in God's name is Samuel L. Jackson in this piece of crud? The only answer we can come up with is that he's a professional actor, and he likes to work. In Arena, he's a Black guy with a large underground command center, just like Keith David in Executive Target (1997). But this movie is just a knockoff of Gamer (2009) and Fatal Combat (1995) in just about every respect, so as noted previously, originality was clearly one of the first things on the executioner's chopping block.

Speaking of which, Kaden as the executioner character, rather than be intimidating, is far more reminiscent of early-2000's game show character The Quizmaster from the show Inquisition. You think at any moment he's going to ask David Lord to recite the names of the Great Lakes. 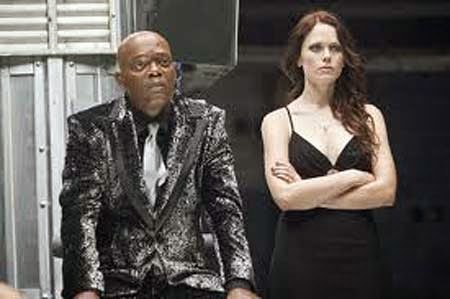 So we covered the childish, derivative dialogue and plot (a character even says "finish him" at one point, clearly ripping off Mortal Kombat), but the movie never explains why they put so much time and effort into getting this random guy, David Lord, to fight. Then they put him in a cell with a bunch of annoying lights and sounds, meant to break down his spirit. It ended up having the same effect on the audience. Then the brainless frat boys use their iPads and iPhones to bet on the fights. And did we mention Kellan is shirtless for about 90% of the movie?

But we always try to see the positive, so on that score we applaud the fact that you can actually see most of the fights and there aren't a ton of eye-singing quick-cuts. But on the whole this movie is lame. It would have helped if they got someone good to be the hero, like a Dolph, Scott Adkins or Gary Daniels, but even if they touched Arena with a ten foot fighting pole, it would still be what it essentially is, sadly enough.

The important thing to remember is that Kellan Lutz is not, we repeat, not Ryan Phillippe. Aside from that, Arena embodies almost everything that's bad about modern-day DTV "action" movies.

But my younger neighbor and his wife were very enthusiastic. Oh my god, these young people.

I thought this film was pretty decent, it helped that Lutz was a pretty good actor, so I was rooting for his character, I also thought the fight scenes were pretty well done

Venom: Some of the fights were decent, but overall we didn't like this one.

Sorry, mate. So you are the exception.

And i could be your grandpa, LOL.

This was a beyond fun movie.

Have to disagree with you this time, Jeff. The idea was solid, but the execution was really bad.

Understandable, I guess I just went in since EW.com hyped it up as Sam Jackson overacting, looked like trashy fun and I found much of the pornographic sex and martial art battles to be above-average for a film that could've easily been released theatrically.

Appreciate hearing your take on it. Sam Jackson was fun in it. He should play more roles like that.