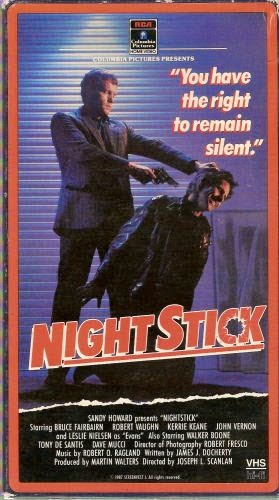 “You need a good workout to get your mind off those terrorists.”


Jack Calhoun (Fairbairn) is a New York City cop with an attitude, and, surprisingly enough, he plays by his own rules. While the top brass, as exemplified by Melton (Vaughn) don’t approve of his rogue ways, some of the other higher-ups, such as Thad Evans (Nielsen) realize that Calhoun’s ways may be unorthodox, but he gets results.

When a three-brother team of bomb-makers and extortionists known as the Bantam Brothers begin blowing up buildings in the city, only one man can stop them: Calhoun. Did you think it would be someone else? But it becomes personal when they kidnap his girlfriend, Robin (Keane). Meanwhile, bank manager Adam Beardsly (Vernon) wants answers. Can Calhoun save the day? Find out today!

Seeing as how this was originally made for TV, and has the alternate title of “Calhoun”, presumably there was talk of having a Calhoun TV show. Nightstick does indeed feel like a movie-long pilot episode. Not that that’s necessarily a bad thing, as the movie captures some great NYC locations, not the least of which is an impressive aerial shot of the World Trade Center towers. It wouldn’t be an 80’s cop movie without some smooth sax on the soundtrack, and Fairbairn makes a decent enough hero. 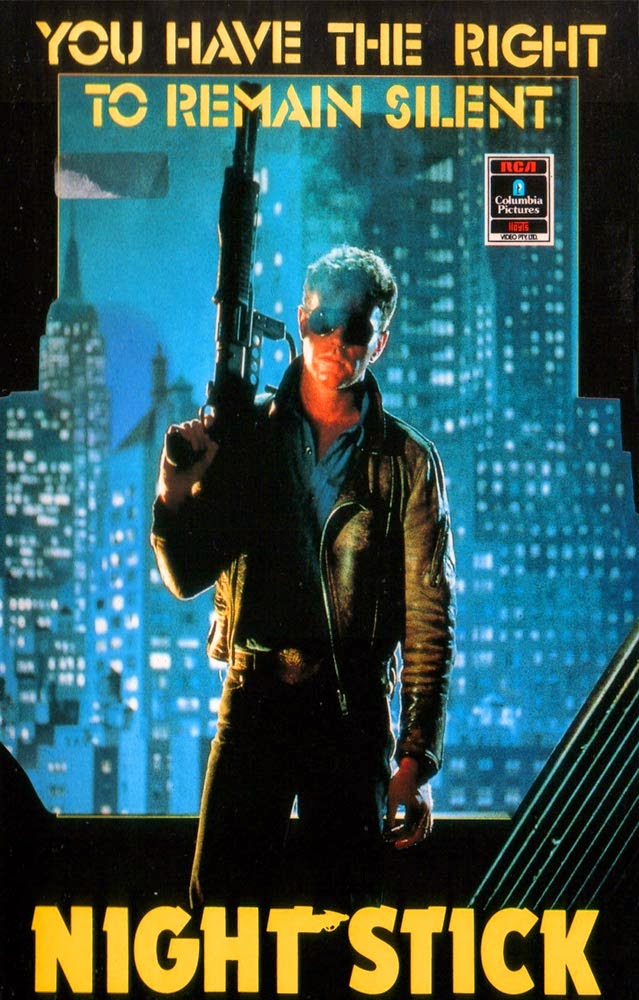 Fairbairn looks like a thinner Tom Berenger, and this must be one of the last movies where the hero smokes. That is exactly what makes Nightstick worth seeing - not just 80’s nostalgia, but the fact that besides Fairbairn, we have Robert Vaughn, Leslie Nielsen and John Vernon all together in a kind of “old guys club”. We always applaud when movies take an anti-young-punk attitude and make salty old guys the heroes. You don’t really see that anymore.

It’s also nice to see Leslie Nielsen before he was typecast in silly comedy roles. Most people forget the pre-2001: A Space Travesty (2000) times, when he was a serious dramatic actor. Plus, in Nightstick, he was a “foodie” before the term was cool.

From a filmmaking standpoint, there are some weird moments of abrupt editing, and the movie on the whole could have used a bit more energy at times. However, Nightstick is a fairly solid, if somewhat tame, cop thriller/procedural. But really, if anything, it’s the familiar faces that make it work. Plus check out that eye-catching box art.

So if you can’t get enough of rogue cops who handle things their own way (and why would you?), feel free to check out Nightstick, but don’t get your expectations too high.

Comeuppance Review by: Brett and Ty
Posted by Ty at 7.7.14

These old vs. young films are always interesting, Stand Alone was a pretty good film with a similar theme.

This was pretty good. You're right about Stand Alone. Also a solid thriller.

Man, that poster at the top is awesome. I genuinely think the 80s were the pinnacle of movie posters.

I would have liked a more inventive tagline than the generic 'You have the right to remain silent'...

Should be something like 'You have the right to remain DEAD... stick'.