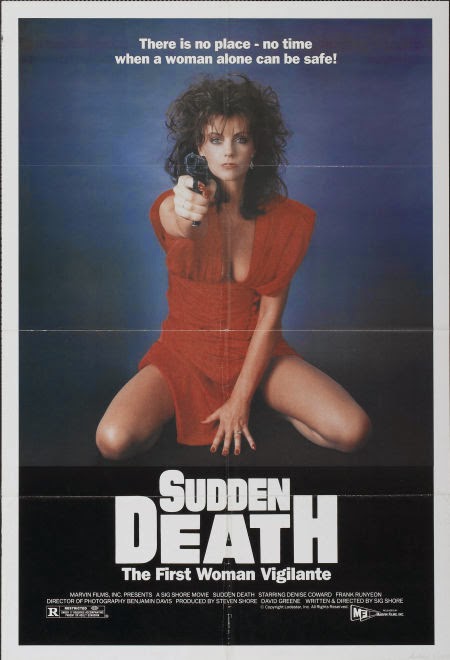 
Valarie Wells (Coward) is a successful, upper-class woman living the high life in New York City. She has a great job, a loving fiance, and all seems to be right with the world. One day, some punks carjack a taxi and go for a joyride. Unwittingly, Valarie hails this anti-Cash Cab and is then raped and beaten by the two thugs. Thankfully, she decides to buy a gun and take the law into her own hands. Because she fashions her own “dum dum bullets”, she becomes known in the press as “the dum dum killer”. Detective Marty Lowery (Runyeon) is assigned to her case, but soon becomes personally interested. Will Marty get in the way of Valarie completing her revenge mission? Find out today!

A low-budget, NYC-shot Death Wish (1974) clone with the former Miss Australia in the vigilante role? Sign us up! It definitely has a lot of appeal for us, and the movie does deliver what you want. It has good, gritty NYC locations, contrasted with Valarie being a classy, modern woman of the 80’s - her clothes and apartment are slick and beautiful, and she even works on one of those one-color computers doing bar graphs. And naturally, she takes an aerobics class.

Runyeon as Lowery strongly resembles John Stamos...with a bit of Erik Estrada thrown in for good measure. This Erik Stamos guy slurs a lot of his words and is tough to understand. But that’s okay, because one of the main highlights of this film is the music...

The music is by Arthur Baker, and anyone who knows about the synth-heavy productions of the 80’s knows his name. He’s famous for working with New Order, and, interestingly, snippets of their song Confusion are included on the soundtrack. The electronic, neo-disco sound was huge at the time and really gives the viewer today a sense of time and place. The title song, by Bloodlines, is very catchy and completely in keeping with the spirit of everything. Baker also did the music for Beat Street (1984) and other songs on the soundtrack, such as the one by Freeez, help reinforce that street-level vibe.

Sig Shore, mainly known for being the producer of (and having a cameo in) Super Fly (1972), is the director, and, clearly in a bout of modesty, gave himself the credit “A Sig Shore Movie”. You don’t often see a director credit written that way. He does a competent job, providing the movie with a nice pace, and it keeps the viewers’ interest over the course of its 90-minute running time.

Released on VHS by Vestron, Sudden Death is a worthy addition to the collection of vigilante/revenge movie fans (such as ourselves).

Ι think I remember the poster from somewhere. Sounds like fun. Will check it out if I find a copy.

Hope you can find a copy. Thanks!

Of course it was. BBFC cuts out all the good stuff! Haha. On Youtube, there's a few videos call the cutting edge (bbfc cuts) that are really interesting to watch. The seagal one was very entertaining. The BBFC hated him. Haha

I'm gonna' have to track this down (as I just watched the clip on you-tube, where she blows away the rapist taxi driver.....Funny stuff)

Definitely worth tracking down.

You can buy it at www.twistedanger.com...

Thanks for the link.

Also,you can get it at ioffer dot com,too..little bit cheaper and the seller is real good,too.

Hi Candy. Do you know how I can go about finding the movie soundtrack? I love the movie as well as the title soundtrack. I was 15 back in 85 when I saw this movie, and I still remember both the soundtrack and the movie some 30+ years later- lol!! Thx:)

Bought this at The Archive in CT (the sister store to Vinegar Syndrome) on VHS and can't wait to watch.