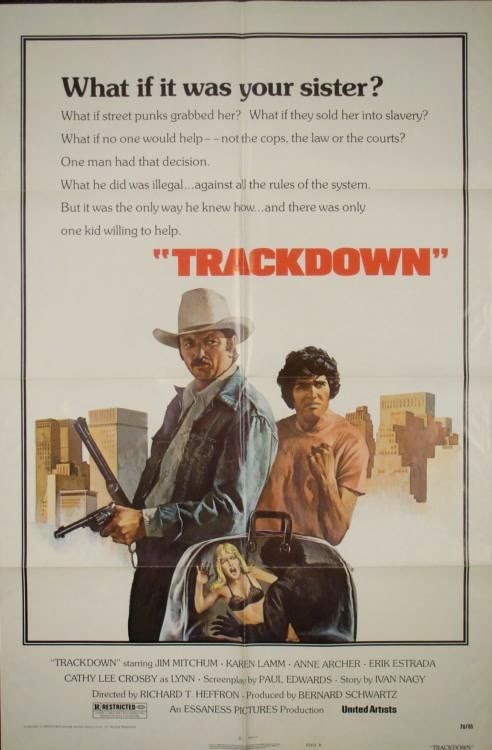 Jim Calhoun (Mitchum) is a Montana cattle rancher who doesn't take any guff. When his sister Betsy (Lamm) decides to follow in the footsteps of so many that came before her and moves to L.A. seeking fame and fortune, tragedy befalls her. The wide-eyed and innocent Betsy falls afoul of an evil gang and is forced into prostitution. A guy named Chucho (Estrada) falls for Betsy, and while initially associated with the gang, severs ties when Betsy goes missing.

Soon Jim Calhoun is in the big city, a big, burly fish out of water, also searching for his beloved sister. Joining the search party is social worker Lynn (Crosby). But super-evil baddie Johnny Dee (Cannon) is going to make life especially hard for the well-meaning trio, who, despite all their social differences, have banded together to save Betsy from a life of squalor. Will Calhoun and his friends succeed in their TRACKDOWN?

Trackdown is a quality example of the "disgruntled man searching for his wife/sister/daughter" movie exemplified by the likes of Hardcore (1979), Broken Angel (1988), and, most recently, Taken (2008). While there are other examples, Trackdown predates the aforementioned three titles, and, as you might expect, is dripping with 70's style. Thank goodness for movies like Trackdown, which show L.A. back in the day in all its gritty glory. While the surface is loaded with rotary phones, wide ties, and bellbottoms, the underlying message seems to be that the city is filled with harsh realities and uncaring people, and scavengers will take advantage of you if you don't have a support system of people who care. 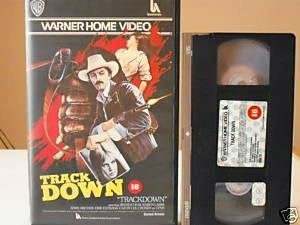 One of those people happens to be Erik Estrada. His youthful energy pours through in this early role, and he has some stylish shirts and a killer van to boot. He even takes Betsy to a very interesting dance club with a live band at one point. Director Heffron was going for realism for the most part, which pays off today in the sense of it being a fascinating time capsule. But the true reward of this realistic approach is that there is no treacly sentimentalism or preachy messages, just Jim Mitchum with a shotgun dispensing Montana justice. Now that's a trackdown we can get behind.

It's hard to pick a favorite Mitchum: Jim, Chris or Robert. Each time we think we have a fave, along comes a Code Name: Zebra (1987) or a mega-winner like the awesome Final Score (1986). But for the purposes of today's review, Jim is in the driver's seat, and we couldn't be happier. Jim Calhoun brings a dose of reality to those L.A. airheads, in the form of some good beat-em-ups and an extremely well-directed action setpiece in an elevator shaft. While Cathy Lee Crosby and Anne Archer provide nice cast additions, Mitchum makes you root for Calhoun. Featuring the end credits song "Runaway Girl" by none other than Kenny Rogers, we feel Trackdown is worth tracking down.

Also check out write-ups by our buddies, The Video Vacuum and The Unknown Movies!
Posted by Ty at 23.7.14

But it is easy to find a Mitchum loser: Bentley.

Back to the movie. Got the tape and loved the movie but long time no see. There is no DVD or Blu in Germany.

This was a cool movie, although it could have done with more action scenes. It's easy to track down, because it's included on the cheap Action Packed Movie Marathon Vol. 2 DVD. Also included are Scorchy, Bamboo Gods & Iron Men and Bulletproof with Gary Busey, the latter two in widescreen.

Yes, Bulletproof is a classic. Only butthorns disagree.