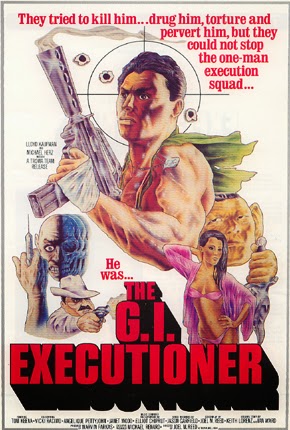 Dave Dearborn (Keena) is a Vietnam vet who currently resides in Singapore. He runs a nightclub on a boat and has relationships with seemingly every woman in the area: Bonnie (Pettyjohn), Cindy (Wood) and Mai Lee (Racimo). Life seems good for old Dave Dearborn, but he wants more.

When some mysterious individuals offer him the chance to investigate a case of a missing and perhaps kidnapped defector from communist China, Dearborn accepts the job. But things get (overly) complicated very quickly, and after some murders occur, he realizes he’s caught in a dangerous web of intrigue. Will he escape and live to carouse again?

Shot in 1971 but not released until Troma picked it up and it came out on Vestron in 1984 (back when Troma had a partnership with Vestron), “Wit’s End”, or as Troma misleadingly re-titled it, The G.I. Executioner, is a bland, dull, middling, mediocre affair, but it has some mildly exploitative elements (mainly nudity), and if it didn’t throw those crumbs to the audience, there would be nothing here.

Director Joel M. Reed is primarily known for having directed Bloodsucking Freaks (1976), also reinforcing his relationship with Troma. Reed only directed six films in his career, and having seen four of them by now, I think it’s pretty safe to say there’s not a lot of meat there. When Bloodsucking Freaks is the crowning achievement of your directorial career, there’s definitely a problem.

As for our “hero”, Dave Dearborn, a (seemingly) 52-year old gentleman with thinning hair, who wears tan sansabelt slacks and white boat shoes, does indeed appear to be miscast as an action hero. Also he occasionally wears an ascot. He looks like he would be more at home with a cocktail in his hand at the golf club’s bar. Hey, Clint Eastwood is one of our all-time personal heroes, so it’s not his age we object to it’s just...he seems out of place, that’s all. Note that an accurate rendering of Dave Dearborn does not appear anywhere on the Troma-produced artwork for the film.

Plus, in the movie (or possibly in real life as well, there’s no way of knowing) he both lives and works on a junk. We know that’s a type of boat, but it leads to strange dialogue such as “why did you come to my junk last night?”, etc. Notably, this is Tom Keena’s only film role to date.

The movie would be almost completely lifeless if it wasn’t for the music by a band called The Jason Garfield. It’s classic 60’s garage punk, and the title song, “Wit’s End”, with its chorus of “Wit’s E-e-e-nd, ah, ah, ah” is very catchy. Thankfully, a few of their songs play throughout the movie, which is good, but not enough to save it.

In other opening credits news, there is a montage of things you’re about to see, including a few potential spoilers! It also says it was shot entirely in Singapore, but there may be some Philippines content as well. During the prerequisite torture scene, Dearborn is, inexplicably, forced to wear a tiny pink vest with gold sequins which barely fits him and looks like it belongs on a doll. Then another character enters the room, also wearing a tiny pink vest. No explanation is ever given as to why. Just one of the many mysteries in the story of the existence of The G.I. Executioner. The whole endeavor has a very flat, John Garwood-y feel, which is not a good thing.

You’ll be at your “wit’s end” by the end of this tough sit.

I first heard about this film in the book "Vietnam at the Movies" by Vietnam veteran Michael Lee Lanning(In the book he judged several films based on how accurate they were to real life during the war, this film was not very high on his list to say the least)

That book also turned me on to a really rare 1983 film set during the Vietnam war called "Deserter", as luck would have it I found a copy on Ebay fairly cheap and bought it ASAP.

I can send you Deserter if you want(I'd love to trade it for something).

Very cool! but we have to decline. We have so many things to watch at the moment. Thanks though.