When Vietnam Vets and Martial Artists Gary Schwartz (Locke), and Mike O’Malley (Binney, not the guy who demanded to know if you had GUTS and went to Mo for the official standings) decide to go on a pleasure cruise captained by Harry Dodds (Cam), they can’t possibly know they would accidentally end up on a godforsaken place called Warriors’ Island, a tropical locale where “Martial Arts outcasts” haunt the place. Led by Monk (Diaz), the island is now the hub of a female white slavery ring/jade mine controlled by Speer (Lombardi) and his minions.

The only problem for our stranded heroes (which also includes Jillian Kesner of Firecracker fame) is that the island also contains zombie-like Kung Fu cannibals who are thirsty for their blood. What a predicament. It’s not exactly a Carnival cruise...or is it? Our heroes will have to use all their wits and fighting abilities to get out of this jam...can they do it?

You might as well just project this movie on the side of your house and sit in your car and watch it, because this is perhaps the ultimate example of Drive-In exploitation from the early 80’s. It has elements from just about every genre of 42nd street-style filmmaking: Action, Martial Arts, exploitation, comedy, horror, and just plain old fashioned adventure.

This nutty melange throws a lot at the viewer in its brief running time, and it never gets boring and always stays entertaining and fun. From the time-honored barfight (complete with disco soundtrack), to the Romp-style elements, to the nudity, to the “Fan Favorite Deaths”, Raw Force is the complete package. 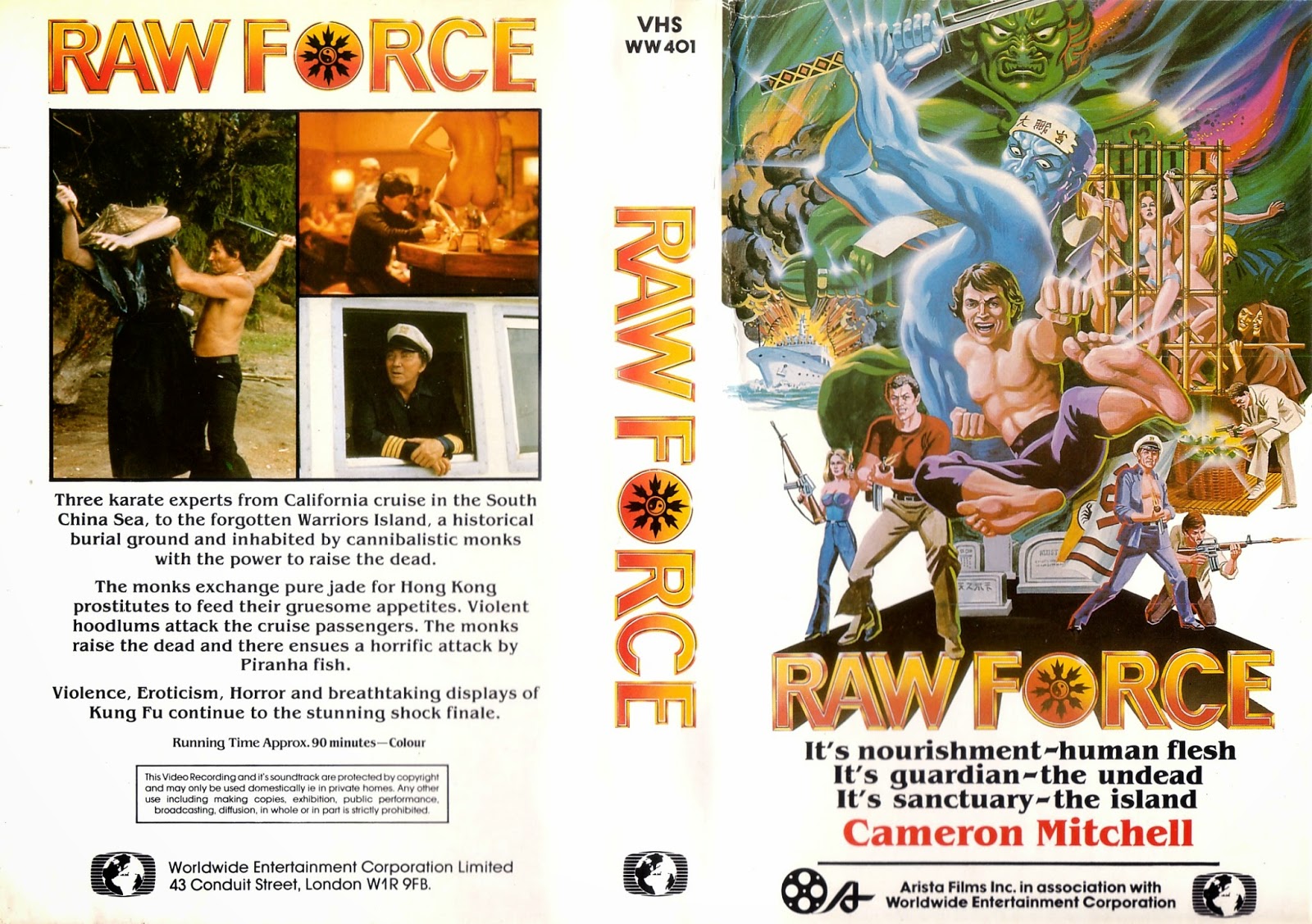 Led by fan favorite Cam Mitchell, the cast of B-movie regulars like Vic Diaz, Jillian Kesner, Camille Keaton, Jewel Shepard and others turn this oddball outing into a gem. Director Edward Murphy, not to be confused with a certain comedic actor who has made certain gender-based misjudgments in his offscreen time, seems to have stumbled into a minor classic here. He later became an actor, and his only writing/directing/producing credits remain this, and the lackluster Heated Vengeance (1985). After that turkey, it’s easy to see why he turned to a different side of the entertainment business. Especially compared with Raw Force, which is a far more satisfying effort.

Originally released on VHS in the U.S. by Media (and this is truly a standout in their already-impressive catalog), and now out on DVD/Blu-Ray combo by Vinegar Syndrome, Raw Force can’t fail to entertain. To be continued...

Also check out write-ups from our buddies, Outpost Zeta and The Unknown Movies!
Posted by Ty at 1.10.14

Man, the plot of this film sounds insane. I only needed to read your plot summary to know this film was going to be a classic.

A classic, which finally got Blu-ray release today!

Heli: It's a crazy movie. Definitely worth watching.

Ex-Action: Nice! It deserves it.

I believe this is getting a DVD release late in the year.

I think the dvd is out now! Finally.