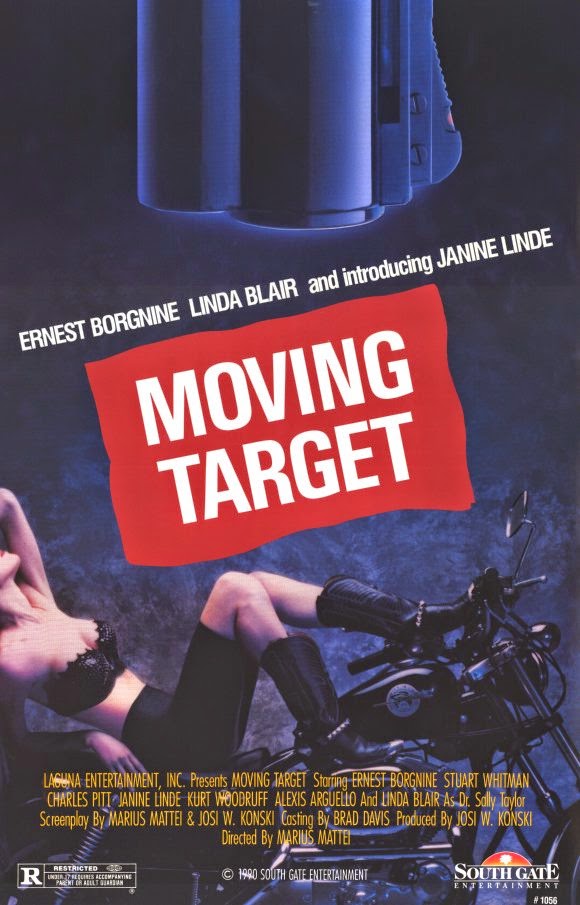 
When her boyfriend is shot in the head by a mysterious assailant dressed in black leather and wearing a motorcycle helmet, the beautiful Allison Spencer (Lindemulder) goes on the run. After suffering some form of amnesia after the boyfriend-shooting incident, she ends up going to live with a man who may or may not be related to her - tennis star Perry Spencer (Pitt). This is to the dismay of Perry’s girlfriend, Dr. Sally Tyler (Blair), who initially treated Allison. Meanwhile, Captain Morrison  (Borgnine) and his awesome partner (Woodruff) are trying to solve the case of the dead boyfriend, the girl with amnesia and the armed killer stalking the streets of Miami. He’s also trying to figure out how the gangster Joe Frank (what? No Reynolds?) (Whitman) plays into this whole scenario. What will happen?

This particular Moving Target (not to be confused with the Dudikoff or Don The Dragon movies of the same name) is total video store shelf-filler of the highest (or possibly lowest?) order. The 80’s were an amazing time when all you had to do was corral a few stars, such as Ernest Borgnine, Linda Blair and Stuart Whitman, guarantee them a paycheck, and then, voila, your movie is in video stores across America and the world. It was a unique time never to be repeated - a world in which Borgnine, Blair, and Janine Lindemulder could appear in a scene together and nobody bats an eyelash.

There’s no question that the camera loves Janine, and Moving Target, if it’s nothing else, is an unabashed celebration of her beauty. While she’s credited as Janine Linde (perhaps someone thought the “Mulder” was too much for audiences to wrap their heads around...which is ironic considering the popularity of the X-Files shortly thereafter in the 90’s), fans who didn’t know she had a pre-porn acting career need to check out this movie.

So when director Marius Mattei put all his eggs in the B-star basket, he forgot to concentrate on just about everything else that directors normally concentrate on. While less forgiving viewers might condemn Moving Target for being shoddy and incoherent, we truly celebrate the priceless line readings and actor reactions Mattei captures.

You know you’re in for something special when the movie starts with a meatheaded moron in a leopard-print speedo chasing Janine around an apartment. It then goes to a TV news reporter named Billie Cody (Giorgelli) who can barely speak English. Surely when she was hired at the TV station, her bosses figured the best way to win the trust of audiences is to get a reporter with an impenetrable Italian accent. You see it all the time. Not to mention her cameraman Chico, who wears some seriously rad necklaces. Then we go to Stuart Whitman in a tracksuit (shades of Bo Svenson in The Kill Reflex?) and that brings us to our “hero”, Perry...

Perry now runs a tennis school named Perry Spencer’s Tennis Clinic, which apparently does well - well enough to keep him in Veryfine juice, anyway - but they only have one tarp sign advertising the place. He dresses in tennis whites ALL the time, and his remote control-handling skills give Marion Cobretti a run for his money. He has amazing shorts. He doesn’t really have a finished haircut, it’s more of an asymmetrical hair pile. It’s easy to see why Allison is so attracted to him.

As for the music, it helps the movie: the opening tune, “One More Try” by Dee Lewis helps set the mood and the “totally 80’s” vibe. The main keyboard theme of the film sounds suspiciously like “Separate Ways (Worlds Apart)” and you think at any moment you might hear an anguished Steve Perry do his trademark “Ohhhhhhhh!!!!!” Well, someday love will find you. That seems to be the message of Moving Target, after all.

Hurting the movie is the fact that Perry is supposed to be the hero, when it should have been Borgnine’s partner, who exudes cool from every pore. The man was totally snubbed. Helping the movie is the time-honored disco scene, and the constantly naked Janine, including some pre-Baywatch slow motion beach running.

Moving Target isn’t likely to be appreciated by too many people - but they’ve got to be out there. VHS junkies should try giving this movie some love.

The synopsis is almost like an entire spoiler of the movie but I still felt the adrenalin rush that the story plot has got to offer. The narrative would have definitely been a much simpler puzzle to solve if the removal of her memories had not occurred.

Happy you enjoyed the movie too. Thanks for your comment!