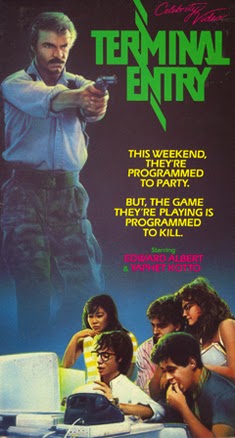 Captain Danny Jackson (Albert) is a Strike Team Leader who is trying to stop Islamic terrorists from crossing over the borders of the USA from Mexico. He’s working with Colonel Styles (Kotto) and their mysterious and overweight boss Stewart (Smith). Complicating their job is the fact that the terrorists are now communicating via the all-new technology of “going online”. This is confounding them, especially Jackson, who is a man of action who would rather be shooting a machine gun from a speeding jeep than tinkering around on a computer like some kind of nerd.

Which brings us to the activities of six teens - Bob, Tom and Howie (Labyorteaux, Stone and Temeles) and their prospective girlfriends Chris, Tina and Gwen (Helmer, Nipar and Terashita) who go out to a remote cabin in the woods to play the awesome new online game, Terminal Entry. What they don’t realize is: this game just got real. The kids are messing around with the same system the terrorists are using to communicate, and that Jackson and Styles, along with reporter Dominique (Swope) are trying to crack. It all comes to a head when the teens, the baddies and the heroes converge. What will happen?

We LOVED Terminal Entry. It was only natural that a movie would be made that marries together two standards of the video stores of the day: action movies and Romps (teen sex romps as we call them). But one of the most fascinating things about this movie is how ahead of its time it was.

Who else in 1988 was talking about computers going “online”, Islamic terrorists (“suicide hit squads” in the movie) crossing our borders, and kids with headsets heavily involved in interactive video games? The movie is so ahead of its time, the filmmakers didn’t even realize it was unrealistic to give all the guys girlfriends. It was before the trope of “girlfriend-less dork” even developed in the popular consciousness. Of course, Terminal Entry will never get any credit for being ahead of the curve by anyone except us. 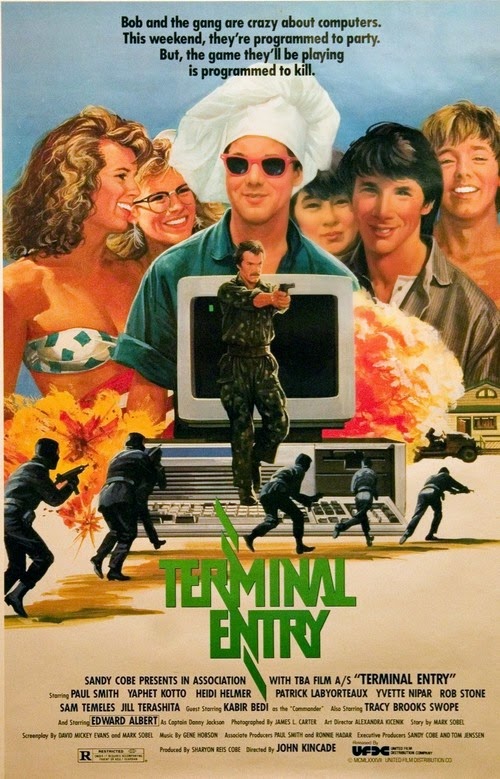 It’s wall-to-wall “80’s Awesome” as everything from the clothing, to the dialogue and of course the computer graphics scream 80’s. To us, that’s a very good thing. Even the Celebrity Video intro oozes with 80’s charm. It’s probably our favorite VHS label intro.

Further increasing its 80’s cred is the presence of Rob Stone, who is instantly recognizable to Mr. Belvedere fans as Kevin on that classic show. Sadly, this is his only film role to date. Also, the movie features Edward Albert at his coolest, as he plays the hero with aplomb with machine guns and missile launchers. He’s the only dude awesome enough to bring nunchuks to a rural forest fight outside of a Godfrey Ho joint. Presciently, he says, “They’re bringing the war to us.” Yaphet Kotto is always nice to see, and he puts in a cigar-chompingly good role. We also loved seeing fan favorite Paul Smith. Tracy Brooks Swope, who was in such “classics” as Counter Measures (1999) and the immortal Keaton’s Cop (1990) is also on board. 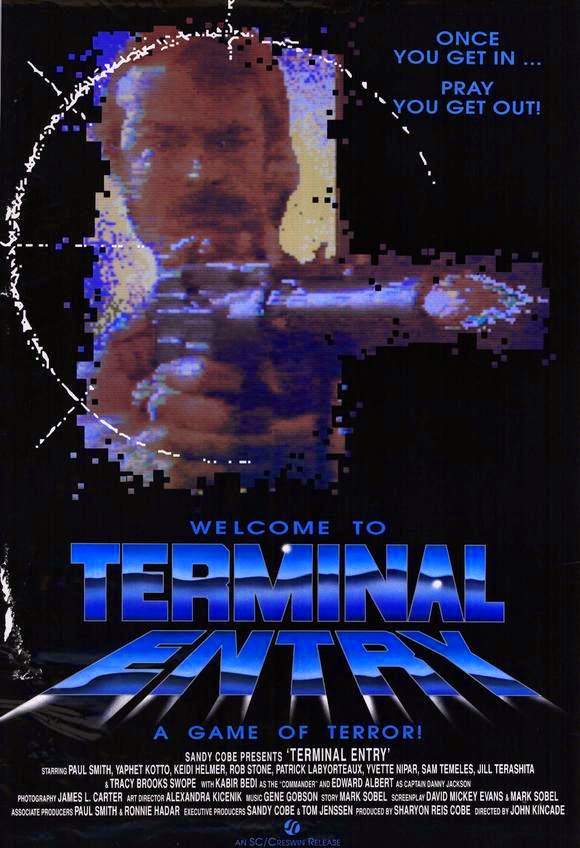 And lest we forget Patrick Labyorteaux as Bob. He’s the charismatic, funny, wacky kid who looks like an 80’s version of Leave It To Beaver’s Tony Dow, and lives by BPOL - Bob’s Philosophy Of Life. Based on his monologue during the end credits (which are yellow on blue), perhaps they were setting up a series of “Bob” movies or TV shows. They seemed to be investing a lot in his character.

Fascinatingly, it was all produced by the mysterious Sandy Cobe, the man behind the great Revolt (1986) and a few other items. The music by Tweed Sneakers is appropriately 80’s, and our man John “Action USA” Stewart did stunts.  It all adds up to a solidly fun movie that is ripe for reappraisal.

Before The Net (1995), before Hackers (1995), there was Terminal Entry. As it says on the back of the box, “Terminal Entry picks up where War Games left off.” We think it should be enjoyed by a new generation of fans.