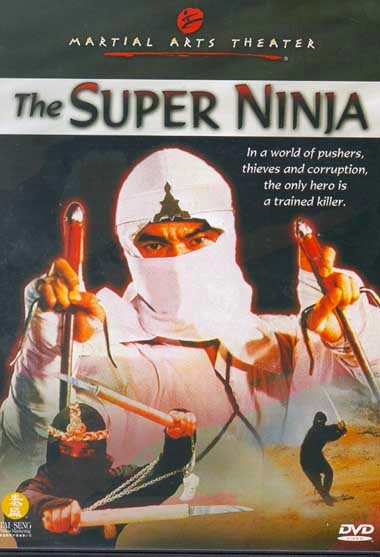 John (Lou) and Spencer (Thomas), who may or may not be part of some sort of Blues Explosion, are Kung Fu cops on the beat in “New York”. There’s a mysterious bad guy on the loose named Mr. Tong (Chang) and he commands an army of ninjas known as the Five Element Ninjas. Their history goes back “1000 years!” with each ninja mastering the forces of metal, fire, wood, earth and water. Now we know where those plagiarists at Captain Planet got the idea.

When drugs are planted in John’s home by a spectacularly evil police captain, John not only has to fight to clear his good name - he has to take on the Five Element Ninjas as well! Will he be able to do it? Find out today!

Having been fans of Alexander Lou since we saw Mafia vs. Ninja (1985), we were happy to see him again (even though MFN came out after The Super Ninja) - especially teamed once more with his co-star Eugene Thomas. The Super Ninja doesn’t disappoint with its Ninja Boom-era insanity and has all the hallmarks fans have come to expect: crazy dubbing (especially for Thomas, it sounds like a White guy doing a racist “Black guy” impression...with hilarious results), gravity and physics-defying ninja action in the forest, and fast and furious Martial Arts, which often get lost in the general aura of silliness. 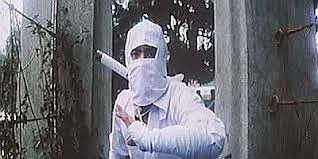 Because the movie is about Lou going on a revenge mission in a series of events started by the unknown (?) vendetta of his commander, which perhaps is not enough on its own to fill 90 minutes, director Kuo-Ren Wu simply extends scenes to the breaking point: while we usually enjoy the time-honored workout montage, the problem is that the Prerequisite Torture and the quasi-pornographic sex scene with Lou and his girlfriend Nancy (Lung) just go on for an interminably long time.

That being said, some of the classic items we know and love are here too: the yelling while shooting a machine gun, the sax on the soundtrack, and ninjas that travel quickly underground like Bugs Bunny, and much more. So the crazy quotient, while not quite as high as in Godfrey Ho-land, is still pretty darn high and makes the movie overall pretty entertaining. 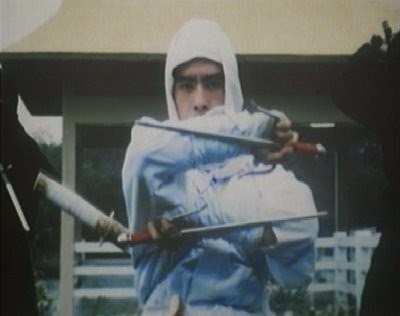 One of the best sections of the movie came when it took time out from the plight of Alexander Lou and it introduced the strengths of the Five Element Ninjas in a series of quick profiles. Also it should be noted that ninjas can walk directly up a tree like they’re walking up stairs, and Alexander Lou’s sleeveless half-shirt that says “MAN” on it. As if his manliness was ever in question.

In all, The Super Ninja just reinforces why the Ninja Boom of the 80’s was such a beloved and successful time for ninjas the world over.