When Lillian's (Shower) 6-year old daughter Susie is kidnapped in broad daylight by a guy in a helicopter who looks like Jesse Ventura, she calls the only people on the planet who can help: Mike Clark (Cook), a hot-headed, unlikable L.A. cop and David (Lurie), a kickfighting instructor with an eye for the ladies. 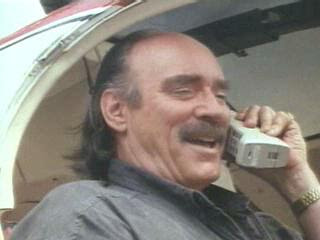 Henceforth, it's "Meatheads Unite!" as Clark and David turn the city upside down looking for Susie. Will they survive the underground punchfighting matches they have to fight in, the many baddies that come after them, and who are the mysterious men "Mr. Po" and "Sam Driftie"? and most importantly will they get along long enough to complete the mission? There is also a loose subplot about who is the father of Susie. What is this? Maury?

"AK2" is not related to AK1 in any way. It is much, much sillier. Despite their unexplained bodyguards, Lillian and her new husband Howard (David Graf) don't notice a helicopter landing in their backyard until it is too late. Maybe they were both distracted by Howard's stylish shorts.

All the men in AK2 look completely ridiculous. Even the butler has a funny ponytail. Take our main heroes for example. When we are first introduced to Clark, he is wearing a pink shirt and tight stonewashed jeans even as he chases a random homie. 90% of the movie Clark is wearing a blue tanktop and ill-fitting blue sweatpants. 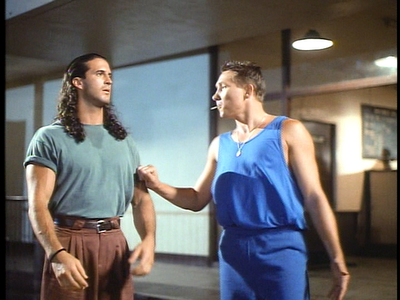 Despite one character enthusiastically claiming "he has great hair!" David's long mane is hilarious and he wears pants with a very high belt. He is shirtless so much, even Clark angrily remarks: "Put your shirt back on, pretty boy!" (Also as part of their rivalry, Clark insults David by saying "You have been drinking too much carrot juice!")

The opening credits misspell "Apollo" as "Appollo" - you don't often see a misspelling in movie credits. Because of his acting ability, meatheadyness, and the fact that he is always chewing on a tooth pick, Cook is downright incoherent. On the Vidmark VHS box it lists him as "five-time world champion" but doesn't say for what. The side of the box lists the genre of this movie as "Action Kickboxing". 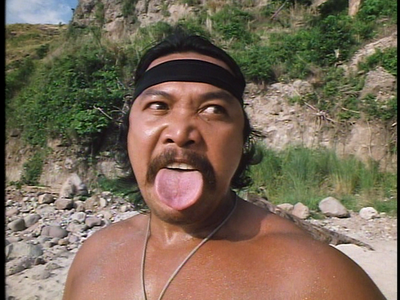 Cook and Lurie's constant fighting is downright brain-numbing. In one sequence they are searching for a guy with a shark tattoo wearing a vest and no shirt. Of course they are.

More movie highlights include: A woman answering the phone at a bookstore by saying: "Bookstore?", when nudity appears on screen, a screeching, wailing saxophone is heard, A guy bringing a bottle of cockroaches to a big brawl just to make a baddie look down, and the best warehouse guard ever.

It ends with a freeze frame and the catchy tune "Fight For Power".