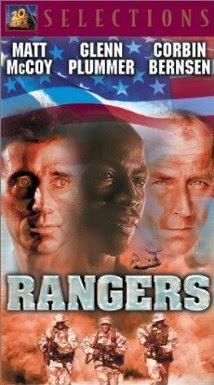 Invasion USA (1985). Red Heat (1988). Navy Seals (1990). Sure, you could spend around five hours watching all three - like a SUCKER! Or you could save time like someone smart and just watch Rangers! Yes, Rangers wasn’t so much directed by Jim Wynorski as it was cobbled together from different sources by him and a team of editors.

Evidently, it also contains footage from The Delta Force (1986) and The Hidden (1987), as if they felt they needed material from a total of five movies because they were in serious danger of creating too much of their own original content. We wonder if it’s fun for filmmakers to assemble a movie in this fashion. After all, they have to try and match the sets of certain scenes so they can be edited together. For example, the set designers for what remains of the original production of Rangers had to make an office space that resembled the one from the climax of Invasion USA, so it would match. But then again, in many other scenes, the cobbles don’t match at all, and it seems like they just don’t care.

But maybe that’s where the fun of Rangers lies - watching in amusement and mild incredulity that the filmmakers would try to pass off a patchwork quilt as one original piece. Who did they think they were fooling? Perhaps less-sophisticated moviegoers were their intended audience, but if you’re watching Rangers, the odds are very good you’ve also seen the movies it’s edited from.

No one skips directly to Rangers without watching at least some of the others. We’re pretty sure that’s never happened. Clearly the budget wasn’t there for large action setpieces, and it’s just more economical to simply buy them from other movies. We realize this is pretty common in latter-day DTV outings, but it’s never more extensive or blatant as it is in Rangers. 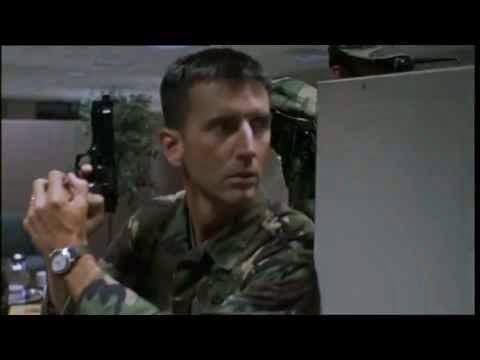 But, piecemeal nature aside, if you’ve ever wanted to see Lloyd Braun of Seinfeld fame shoot people and savagely murder them, now is your chance. Matt McCoy’s faces are truly funny to observe, and the only thing that would make this better is if, while he was unloading his machine gun, he was shouting “SERENITY NOW!!!!!” Sadly, this doesn’t happen, even though his stint on Seinfeld was pretty close time-wise to his role here. Clearly the casting people saw McCoy as Lloyd Braun and thought “that would be perfect casting for our hard-ass Army Ranger”. It all just adds to the off-kilter, “this shouldn’t exist” vibe of Rangers. So if the shooting, blow-ups, inserted footage from other movies, and pre-9/11 Islamic terrorism doesn’t hold your interest, surely McCoy’s wide-eyed mugging will.

While Corbin Bernsen is in it for a few minutes, the movie is pretty much stolen by one Dartanyan Edmonds as Fenton. We’re thinking he may be the lost musketeer. He gets all the good lines and has some nice charisma and screen presence. The movie would be worse off without him. Glenn Plummer also tries nobly to save the sinking ship, but it’s truly a case of “rearranging deck chairs on the Titanic”. Still, you’ve got to admire the guy for trying.

So if you’re looking for anything remotely close to military or cinematic accuracy, run screaming in the other direction from Rangers. If you want a movie (well, technically, six movies all told) with a rock-bottom budget filled with unabashed stupidity just to have a larf, well, Rangers is certainly that.

So I have to watch it again. Can't remember scenes from "The Hidden".

I was quite surprised to find this film at my local library, it's always interesting to see how these films use footage from others.

I've noticed that many films have used Iron Eagle as stock footage, and Terminator 2 has been used at least twice in other films.

Harry: Not sure it's worth a re-watch, but the stolen footage of The Hidden and especially Invasion USA is hilarious to look out for.

Venom: It's always funny to spot the footage and say.."hey, this looks familar..." Haha.

This stock footages remembers me "Narrow margin" with Hackman. This helicopter chase is watched later in three movies, latest was "Bad Ass 2".