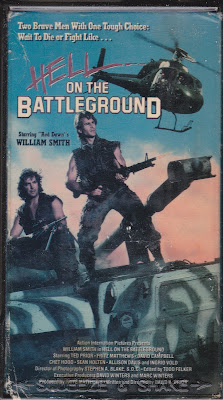 Sgt. Bill Lance (Prior) and Sgt. Jack Casey (Matthews) are battle-hardened warriors who play by their own rules. While in the depths of the jungle fighting the Russians (is this Vietnam?), their superior officer, Col. Meredith (Smith) punishes them for their rogue ways by having them take some new recruits along with them on their patrols. Now outnumbered by the enemy and surrounded on all sides, Lance and Casey will have to use all their warlike ways to prevail. Will they do it?

Anyone who knows David Prior and the AIP style of filmmaking will appreciate this movie. It’s no Deadly Prey (1987), but what possibly could be? While Deadly Prey was Ted Prior’s movie, Hell On The Battleground is all about Fritz Matthews. Here Fritz gets his moment in the sun and he’s truly never been better. He’s a mulleted mega-meathead who literally spits his terse dialogue and it’s a lot of fun to watch. He even plays his own theme song on acoustic guitar, “Casey’s Bad Boys”. Truly mustaches and mullets are the order of the day here, as surely they were in Vietnam. Ironically, the great William Smith is ‘stache-less here, but he’s as gruff as ever. 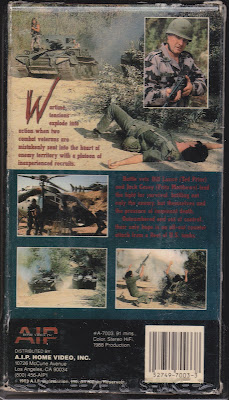 Speaking of Smith, once we’re firmly into the movie, Smith - who sounds like a 45 of George C. Scott played on 33 1/3, breaks into a solemnly-spoken poem about Casey and Lance. Apropos of nothing, Smith intones this ballad of the two mighty heroes. Truly in a movie that is highly repetitive and contains shooting, shooting, maybe some grenade launchers and an exploding helicopter, some more shooting followed by maybe a little more shooting, this moment of poetry from an unlikely place stood out. Are Casey and Lance aware that Col. Meredith is writing poetry about them? And how would they feel about that? Those are the unanswered questions that are the food for thought here.

Apparently, since this was the 80’s, our heroes are fighting the Russians, and there’s even a guy that looks exactly like a Red Scorpion (1988)-era Dolph Lundgren. He even has the blonde brush-cut hairdo. The Prior brothers continued fighting the Russians in The Final Sanction (1990), and there they were represented by Robert Z’Dar. So who comes out on top?

You’ll have to see for yourself. Also, we’re not sure if this was common practice or not, but Lance and Casey’s wives ( Alyson Davis and Ingrid Vold) are along with them, encamped on the battlefield. Both Davis and Vold were in the same year’s David Heavener vehicle Deadly Reactor (1989) together. Do they only come as a pair? But it just proves even further that 1989 was probably the top year for video stores in the U.S. Product was coming fast and furious, and only now are we beginning to sort it all out.

There’s the cross for good luck, and AIP staple Sean Holton is also on board, and this movie does probably top Jungle Assault (1989) and Operation Warzone (1988) for AIP war material, but the problem is there’s no one strong, central villain. There’s no baddie to boo and hiss at. It’s just the nebulous concept of “Russians”.

But that aside, there are enough decent/funny/worthwhile moments to keep this one afloat, and it has a short running time, so it’s not a burden to watch like some of its more bloated competition. Yes, it’s very dumb, but it’s fun dumb. And it was all done on a tiny budget and released to video stores for the viewing public. It might not be to EVERYONE’s taste, but you have to respect their work ethic and the fact that they got it done.

Featuring yet another quality end-credits song by Steve McClintock, “I Believe In The Battle”, Hell On The Battleground, powered by the Prior-Fritz-Smith triumvirate, comes out as towards the top of the AIP war movie canon.

I was hoping you would get to this! I watched my Japanese tape the other week, it's a great little film.

Totally agree! This was a solid and silly AIP war film.

This one looks great, I can't wait to check it out.

This is one of the stars of the film. I was Pvt. Johnson (Mr. Rocket Launcher guy). It was a blast shooting this little film. It was one of my first roles. Currently working on a Star Wars type film called "Survivor", role-Commander Eddington. Should be out later next year.

Thanks for dropping by! That's great you loved shooting this and it was a fun experience. Will keep an eye out for your new movie.