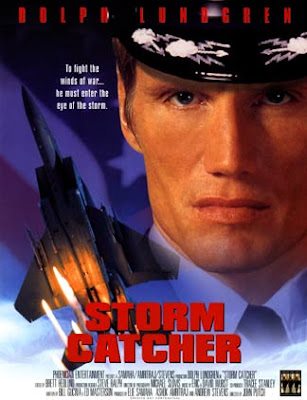 Jack Holloway (Dolph) truly has it all. As a proud member of the U.S. Air Force, he gets to live his dream of flying a radical stealth bomber called the Storm Catcher, serving under General William Jacobs (Miano). When he’s not off going Mach 3 Turbo before it was a shaving razor, he spends time with his loving wife Jessica (Bax), and as a devoted football coach to a girls little league team featuring his daughter Nicole (Zima). However, the skies become less than friendly when someone dressed as Holloway kills a bunch of people, and, naturally, Holloway becomes the prime suspect. Breaking out of custody, Holloway and his buddy Captain “Sparks” Johnson (Clark) try to clear his name. But things get really real when Jessica is assaulted and Nicole is kidnapped. Realizing he’s in a race against time against an evil cabal of baddies intent on misusing the Storm Catcher for their own evil ends, will Holloway be able to stop the madness?

Storm Catcher is really a lot better than you probably think it is. Sure, it seems like another plane/guys-sitting-at-radar-monitors-giving-coordinates slog, and, to be fair, there are elements of that scourge of the later 90’s, but it manages to rise above the others, much like Holloway’s beloved stealth bomber. It’s certainly better than Freedom Strike (1998), and that had Tone-Loc. TONE-LOC. So there was a lot to prove. Out of the movies from the “Dolph hitting the skids” period of his career, this one is the best.

Unfortunately, things would sink back down after this brief high (no plane puns intended) when Dolph re-teamed with director Hickox the next year for the dreary Jill the Ripper (2000). So enjoy the small pleasures of Storm Catcher while they last, and there is plenty to enjoy here. 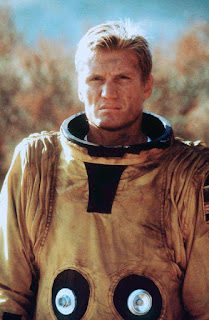 We see what the movie was trying to do. It was trying to go for that “theater-ready” vibe, what with the big-sounding score, the fact that it was shot well, and it includes some prescient dialogue that seems to apply more to today’s political situation than ever before. It even includes some classic action bits like people running away from an explosion, and plenty of people get shot/beat up/blown up. But no matter how hard they may have tried, alas, it was destined for the video store shelf.

Hickox never seemed to accept that he was a DTV director; at least for the first half of his career, notably with Full Eclipse (1993), he certainly tried to imbue his films with a professional, mainstream feel. Dolph probably liked his role as Holloway because he got to be the action hero as always, but he showed a sensitive side with the little league football scenes. Our guess is he would jump at the chance to do a Ladybugs (1992)-type movie, because he likes showing he’s more than just an action guy. That will probably never happen in our overly-PC world, where kids are discouraged from football, especially girls, and especially with no helmets. Dolph was probably miffed that footage from this movie was nonsensically and lazily edited into the abomination that was Agent Red (2000).

Robert Miano again proves he’s one of the more underrated actors out there, and the Storm Catcher plane is so technologically advanced, you can voice-text things you want to say (much like the Dragon program whose ads are constantly on TV), and it has minidisc abilities. It would probably be nothing without its minidisc player. Once again, Dolph delivers the goods against all odds. Feel free to catch this storm tonight.

Hickox's "Jill Rips" was not has bad as people say, quite underrated actually, but if you like action "Storm Catcher" had its moments, thanks to Anthony and his camera operator (and a lot of stock footage).

I'm a Dolph Fan. So I say Dolph don't make bad movies. I called them only "other" movies. I like this movie, it is typical for this aera. Today you can find much more badder flicks.

Anonymous: Jill The Ripper had a couple decent moments. Not as bad as The Last Warrior. That was a Dolph dud.

Harry: Haha. This was a solid Dolph. We think his weakest ones are The Last Warrior, Agent Red and Detention.

This was an OK movie, not one of Dolph's best, not one of his worst either. This was the point of time movies started to cannibalize each other, where parts of movies were recycled into others. The bus chase from Red Heat and the car chase from Species showed up in countless movies. Worst Dolphs: The Last Warrior, Ambushed/Hard Rush, The Minion. Next: venom disagreeing ;-)

Can't agree more. No need to steal from Red Heat. Make your own chase. Haha, he will disagree.

This one is still available on Hulu last I checked and I had fun watching it last December along with AGENT RED (for a Damian Lee film that's actually solid, see A DARK TRUTH).

Agent Red is amusing to see the usual Wynorski schlock and this one Russian guy who was on 24, Alias, JAG and one of the various Russian voices heard on a Splinter Cell video game.

Storm Catcher is far better though since Dolph actually isn't going through the motions and the film does try to be engaging and seems to be aware that it's more of the same material being recycled ("Die Hard-in-an-army-base"/Broken Arrow) and even has the hero almost lose his wife which was a nice change of pace. Hell, the following scene where he must find an unlikely solution after being framed and gets beat up by a giant helps us care since otherwise it would be the usual "invincible hero" fluff.

Didn't know Storm Catcher was on Hulu and didn't know Damien Lee had solid movies in his resume. Haha. Thanks for informing us.