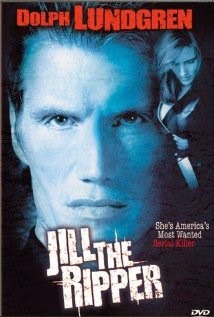 
Set in Boston in 1977, Jill the Ripper is the tale of Matt Sorenson (Dolph), an ex-cop who may or may not have gotten in trouble because of his rogue ways and possible drinking problem. When his brother, a politician who was meant to be spearheading a massive underground tunnel project, ends up mysteriously murdered, Matt tries to piece together  who may be behind it. It turns out a female serial killer is on the loose, and Matt tears up all of Toronto, sorry, BOSTON, trying to get answers. As might be expected, his search leads him to seedy S & M dungeons where men are constantly being whipped and humiliated, Zipperface (1992) style. Will Matt Sorenson get to the truth, or will he get all “tied up” (groan) ?

Jill the Ripper was made during Dolph’s “hitting the skids” period of the late 90’s-early 2000’s. He was caught in between his 80’s glory and his modern renaissance. Hence cruddy crud like Agent Red (2000), Storm Catcher (1999), Hidden Agenda (2001) and Detention (2003). Missionary Man (2007) catches Dolph right in the middle of production companies shrugging their shoulders and announcing “we don’t know what to do with him”. This proves that even being the world’s greatest human being still isn’t good enough for Hollywood or small independent companies. He must have felt he was in a bind, much like Jill the Ripper’s victims. 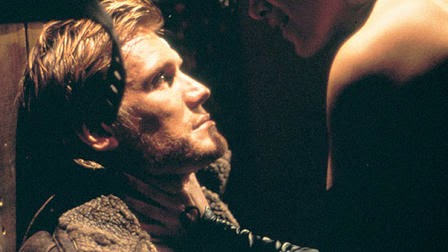 Dolph does get to stretch his acting muscles a bit, because, after all, this is more a mystery/drama than anything else. There are large swathes of the movie that consist of dour dialogue scenes, and Dolph probably enjoyed a chance to get away from being seen as “just another musclehead”. Though we know that isn’t true, he still got to show some dramatic range here.

The fact that it’s a 70’s period piece was interesting, and appreciated, but the movie as a whole has a “not theater ready” feel that many Canada-shot DTV items seem to have, and the whole 70’s vibe might have been done better under different circumstances. For example, there’s a Black guy with an absurd afro wig and an outfit that looks more like he’s on his way to a 70’s-themed party than anything else. Either that, or he sincerely believes the fact that funk will never die. 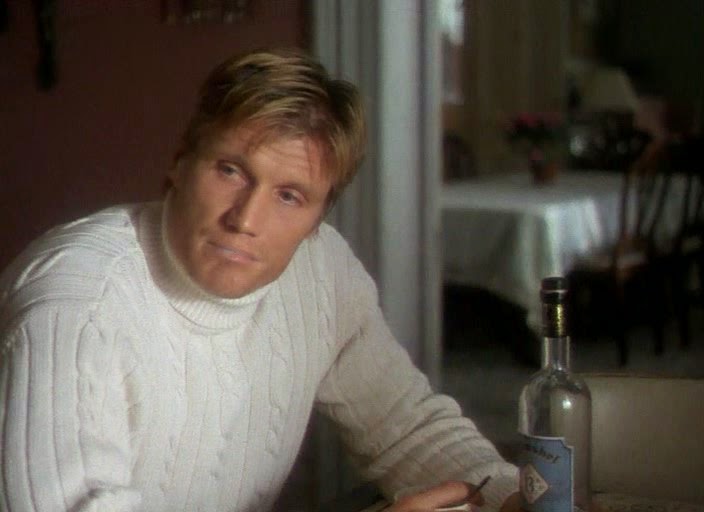 So while the movie isn’t a typical beat-em-up, it kind of made us wish that it was. It’s more of a ponderously over-serious bore, though it does include the time honored barfight. Let’s also remember the late 90’s/early 2000’s were a dark time for DTV - in more ways than one. It was the beginning of the “Too Dark Cliche”, or TDC, which is highly prevalent today in both TV and movies. That being the phenomenon of under-lighting scenes to the point where it’s not moody or interesting, you just can’t see anything. So, for the above stated reasons, it doesn’t hook you in, and you don’t really care all that much. Law and Order: SVU episodes, generally speaking, have similar themes and are more watchable.

Jill the Ripper was generally relegated to the dusty netherworld of un-perused video store shelves of the day. And that seems to be the final fate of this item from the interim phase of Dolph’s career.

Also check out write-ups from our buddies, DTVC and The Video Vacuum!
Posted by Ty at 6.6.14

And the Germans use the title "Jill Rips".

Saw the VHS. It's not one of his better movies.

Have a nice weekend
Harry

Have a great weekend too!

I enjoyed Hidden Agenda, Agent Red, Storm Catcher and Detention. This film not so much, I thought it was slow and boring for the most part, Dolph and serial killer films just don't mix well IMO.

We haven't seen Storm Catcher yet. Hard to get a copy at the moment. Agreed. This was a weak Dolph.

I could send you a copy if you wanted.

This was one of the first DVDs I bought, unintentional laughs and This Is Awkward chants ensued.

Venom: Thanks! We don't have anything to send to you at the moment if you don't mind that.

That's OK, i'm already planning on doing a trade with Mitch soon, so i'll be getting plenty of films from that.

JILL RIPS is the original title under which the novel was also written and the movie produced.

The American distributors renamed it JILL THE RIPPER to sound more like JACK THE RIPPER obviously.

One of Dolph's best acting performances of his career and one of the most serious films he's made. Not for all tastes but a bit more artsy...

It's an odd Dolph movie. Agreed, this was for completists only.