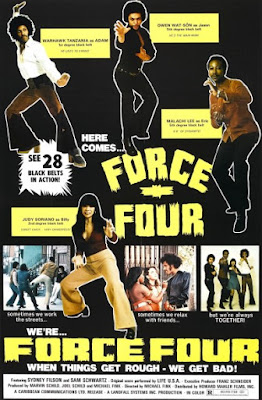 
When a guy on the streets of New York is mugged and a priceless artistic artifact stolen, the whole underworld begins buzzing. A gangster named Z (Schwartz) wants this precious statue, as does a woman named Felicia (Filson). Thankfully, a team of black-belted Martial Arts experts are on the scene to stop the artifact from getting into the wrong hands: Eric (Malachi Lee), Billy (Judie Soriano), Jason (Wat-Son, whose real name is Watson but presumably he hyphenated it to look more Asian?), and our personal hero Warhawk Tanzania as Adam.

When you have a name as awesome as WARHAWK TANZANIA isn’t it a bit of a letdown naming him, simply and boringly, “Adam”? Kind of a step down if you ask us. Anyway, what ensues is a bunch of wonderful incoherency as warring factions vie for the statue. Who will get it? The bad guys or the BLACK FORCE?

Travel back in time to the freewheeling 70’s as you boogie on down to funktown in this unconstrained, uncontrived, yet unintelligible outing. The temptation is to label this as “Blaxploitation”, but really, this movie defies all labels and is a planet all to itself. That being said, it’s very much in the vein of fan favorite Death Promise (1977) (though nowhere near as good), and fellow - and only other - Warhawk vehicle Gang Wars (1976). Even Wilfredo Roldan from that film reappears here, continuing the through-line. It’s all about grimy NYC streets, funk on the soundtrack (from a band called Life, USA), and montage after montage that seems like it was edited by people who were distracted by Watergate.

But you have to remember that this was during the Kung-Fu craze of the 70’s, and material like this made a lot more sense back then, presumably. Bruce Lee was king and everybody was Kung-Fu fightii-iin. So it follows that you’d get a bunch of non-actors and semi-pro’s together and put their Dan or belt level on the screen along with their credit. Seemingly everyone is listed that way.

We practically know the skill level of the best boy grip for godsakes. Or best boy Kung-Fu grip, as it were. We’re even informed via an on-screen title card before the movie that “no trick photography was used” and high-speed cameras were on hand to capture all the action. And this was decades before CGI trickery and quick cuts. Such was the reverence for the craft at the time. The problem, if it is indeed a problem, is that because of their focus on the Martial Arts, literally every other facet of the movie suffered.

The result is a disjointed, incomprehensible mishmash of scenes of our heroes “hitting the streets”, with a bunch of post-dubbed dialogue that is unhearable because the music drowns it out. The only thing louder than the music are the shirts the characters are wearing. The fight scenes have no pretext before they spring up, and what dialogue you can hear is classic jive talk. You have to love it. Or maybe you don’t, it’s entirely up to you. We found it entertaining for most of the running time.

Tailor-made for drive-in’s, Black Force was from a different time, when even the priests had very wide collars, even the baddest bad guy had a walrus ‘stache, and Martial Artists took their loud exhaling VERY seriously. There’s even a “greatest hits” segment at the end where we can see all the moves yet again. At least the music is good quality during all this madness.

Besides, you know a movie is going to be good when a credit appears beforehand stating “Produced by Landfall Systems, Inc.” Apparently this wasn’t produced by a human being, but maybe a laundromat or something. Seeing as we also have a movie on the site called Whiteforce (1988), we figured we’d be fair and balanced.

Released on VHS with an unrelated guy on the box cover, the same company actually released Black Force 2 - a retitling of another film that came out two years BEFORE the original Black Force! Maybe the fans were just clamoring for more during the video store era of the 80’s. For a classic example of bellbottom-Fu - with no regard given whatsoever for coherent consistency - look no further than Black Force. And why don’t guys keep their afro-picks in their hair anymore?

It's definitely worth seeing for all the kung-fu action.