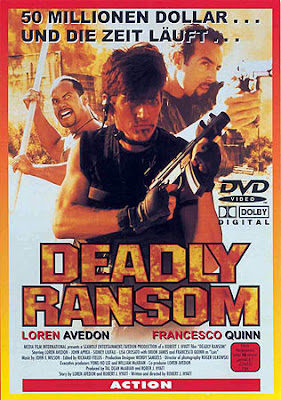 
Max Lightener (Avedon) is a Navy Lieutenant, used to staging raids with his strike team. When his fiancé, Jackie (Crosato) is kidnapped, he teams up with a guy named Luis (Quinn) and snaps into action. It turns out the main baddie behind the kidnapping is a drug-doing no-goodnik named Bobby Rico (James). Faced with such an opponent, Lightener later calls in the assistance of his strike team so he can initiate “Operation Shadow”, i.e., get his girlfriend back. Also Lightener supposedly has some precognitive abilities a la Michael Pare in Blink of an Eye (1992), but that’s not developed very well. Will Lightener strike like lightning or lighten his load?

Okay, let’s start with some positives. (There aren’t many, so don’t get comfortable). In an apples-to-apples comparison (or should we say Avedon-to-Avedon comparison?), Deadly Ransom is better than the other Avedon-produced film, The Silent Force (2001).  While it does have a similar feel, which makes sense, Deadly Ransom has some funny knife-throws, an exploding helicopter which looks like it was lifted from some other source, Avedon shoots people while sliding down a rope like an angry, full-grown gentleman invading a DZ Discovery Zone, and one member of his strike force looks like noted pervert Anthony Weiner. This calls into question the effectiveness of his strike force. The movie contains shooting, blow-ups, and some silly fights. It's lit well.

There. Now that we’ve front-loaded what positive attributes we could scrape together out of the movie’s 97 minutes (including the end credits), here are the problems. Avedon remains unlikable. It’s hard for the audience to get behind his mission because we simply don’t like him very much. You can tell he produced the movie because there are multiple scenes of his face. Evidently he believes his face is so powerful it can stop a sniper’s bullet. As we all remember, Avedon played an evil kickboxer that fought David Hasselhoff in a classic episode of Baywatch entitled “Kicks”. THAT should have been a full-length feature instead of Deadly Ransom. Avedon should have realized that. 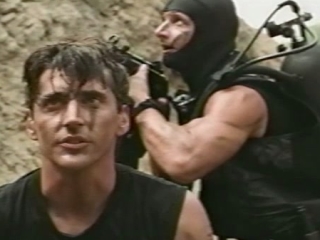 The tone of Deadly Ransom just feels off, and there’s no character development. Just a smidgen of depth to the characters - we don’t ask for much - would have gone a long way here. That is replaced by bickering between Avedon and Quinn, which is always a bad shortcut. When they’re not bickering, they’re training shirtlessly in the desert. Yay. Proving that the movie is straight-up racist, instead of dying by knife-throws like everybody else, when they kill a Native American, they throw a tomahawk at his head. Presumably they don’t know the meaning of the word “subtlety”. You don’t need to prove a cultural point with your choice of weaponry.

Despite the presence of an automated tank that looks like it has a smiley face, Deadly Ransom just doesn’t engage the audience. Is it really even that different from Mike Norris extravaganza Survival Game (1987) - just another Kidnap Slog? Sadly the answer is no, and it’s hard to imagine video store patrons consciously choosing Deadly Ransom at their local video store in 1998, or at any other time. Even the great Brion James can’t save it, and that’s not a good sign. It all feels kind of junky and trivial, and really shouldn’t go on anybody’s must-see list.

I agree. This movie has a junky, no-budget feel to it, and is probably Avedon's worst. It was pawned off on a "2 movies on 1 disc" DVD together with The Pawn, which is equally bad.

When VH1's Behind the Music first aired, I recall one reviewer writing something to the effect of "They even make Milli Vanilli interesting and watchable."

I have been reading this site for a while, and I must say, you make reading about unwatchable movies enjoyable.

I don't know if you can use that on LinkedIn, but I would gladly sign my name to it if you wanted it.

Thank you once again for a great read!

Roger: Totally agree. This was as poor as The Silent Force. Will avoid The Pawn. Haha.

Joe: Thanks for the kind words again! We really appreciate it. Haha, love that Behind The Music episode. Same with Vanilla Ice.

Word to your mother.

I thought this and Silent Force were OK, but it's too bad Loren never had quite the career that Lorenzo Lamas did.

Haven't seen The Pawn, but it sounds interesting.

They could've teamed up: Loren N' Lamas together at last! Haha