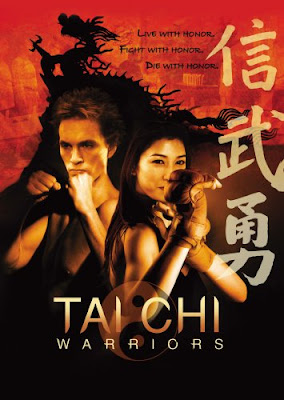 When college student (?) Henry (Sefton) invites his friend Bruce (Covington) to stay with him while in China, little did they know they would be staying at a run-down orphanage/Tai Chi center run by the aging Master Dragon (Chiang). While Dragon puts them through their paces during training sequences, the guys find a budding romance with Lin Lin (Jacqueline Lee) and Fay (Yan Bing Zhang). However, all is not right in the world of Tai Chi. Master Dragon’s former rival is still bitter and angry about...well, their rivalry, and organizes a fight to the finish with his crew of fighters, a bunch of unscrupulous kickboxers led by Yuri (David Majuri). Will the power of Tai Chi prevail?

A monument to the concept of broken English (that is, when you can hear the muffled dialogue), Tai Chi warriors is a low-budget Martial Arts film that looks far older than it really is. Maybe older film is cheaper in Hong Kong, but even though the end credits state “October, 2004” (interesting that they would put a month), it looks like it was filmed in the early 90’s or perhaps even 80’s.

This is the type of DVD you might find in a gas station or other place that sells dollar movies - and the only audio options are English or Portuguese. Go figure. While it does go down a similar road we’ve all seen before - a road traveled by American Shaolin: King of the Kickboxers 2 (1991), among many others - here we’re treated to all the familiar low-budget pitfalls as well: the aforementioned bad sound and picture quality, stilted performances, slow moments, etc., but this time around it all feels very childish. That particular vibe didn’t sit well with us, but there are a few bright moments as well...

The scene of “no rules bowling” was a standout, as was the bicycle fight, and there are some classically silly pretexts for fight scenes, but it’s all mixed in with some wire-fu and needless Godfrey Ho-style jumping around, plot-wise. Why a White college student in his early 20’s would be best friends with a middle-aged Black gentleman was never explained, but it must go to show that people were a lot less racist in the 80’s. I mean 90’s. Sorry, “2000’s”. The whole outing is rather impenetrable and even Master Dragon’s mullet couldn’t save it.

Normally we list misspellings in the credits when we find them, but there are far too many this time around, so we’ll have to leave it to your imagination as to which of the many words were spelled incorrectly. Or you could watch the movie for yourself, but we wouldn’t necessarily recommend that.

Haha it really is a tough sit. But the bowling part is great. Haha