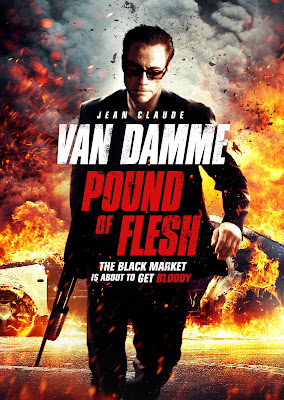 Deacon Lyle (Van Damme) is just a guy out on the town in the Philippines, when he brings a nice lady home from a disco. When he wakes up in the morning, he is in a pool of his own blood and discovers someone has opened him up and stolen his kidney. Deacon then teams up with his religious brother George (Ralston), his old buddy Kung (Aleong), and the mysterious Ana (Peters), all in some sort of mission to get to the bottom of the kidney conspiracy. A baddie named Drake (Shahlavi) - a man more unpleasant than the music made by his namesake - may be behind this, or is there a conspiracy that goes...ALL THE WAY TO THE TOP? Further complicating things is the fact that Lyle’s niece is on the kidney transplant list. Will Deacon Lyle kidney-punch his way back to renal health? Just try to hold in your excitement...

They’ve Taken (2008) my kidney! is basically Van Damme’s battle cry in this somewhat puzzling new outing. Somehow a missing kidney isn’t as compelling a motive for revenge as a missing daughter...or are we missing something? He still has one left, as far as we know. Van Damme is good in the fight scenes, and he moves especially well for someone who has just had some unauthorized, highly-invasive surgery done on him. There’s even a novel excuse for him to do his famous split (yes, he’s still doing it, and proud of it, it seems) - but some not-so-novel excuses for rampant Van Damme nudity. We don’t need to see your whole body to know you’ve been kidneynapped.

But we give ol’ JCVD credit for trying. The opening alley fight is a standout, and the overall vibe of the movie is on the serious side, in keeping with most of the recent DTV JCVD output. Perhaps to maintain the “dark” vibe, to counterbalance the kidney-stealing plot, there are some religious themes that run throughout. This is mainly achieved by the brother character, the fact that Van Damme is named Deacon, and the fact that Deacon beats people up with a bible. Yes, as a society, we’ve reached a point where we’re subjected to Biblefighting. This might not be a good thing. 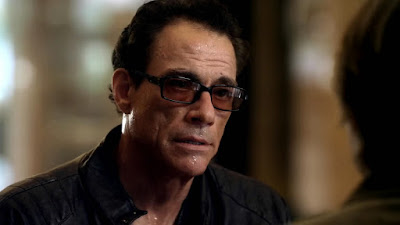 But rather than concentrate on “dark” subject matter, director Barbarash - of fellow Van Damme vehicle Assassination Games (2011) and Michael Jai White vehicle Falcon Rising (2014) fame - REALLY should have “turned off the dark”, if we may paraphrase the title of that brilliant Broadway play. Why, oh, why do we always have to ask that filmmakers turn the lights on in their movies? Is that really so much to ask? And another no-no is here that is painfully obvious - green screen and CGI. Is it really so much better and easier to have chintzy-looking computer-graphic bullet hits on walls and gunsmoke? We’re really getting tired of what we call “Alt-E”, meaning some dork in an editing suite somewhere hitting “Alt-E” for “Explosion” instead of employing the technical mastery of pyrotechnics experts.  So, to recap, we have barfights, darkfights, and biblefights. (We didn’t mention the barfight before, but of course it’s there).

With the money they spent on CGI and green screen, they could have used on lighting. Priorities, people. There is some light Punchfighting, but it’s barely there and hard to see (like everything else). Van Damme’s buddy Kung - played by Aki Aleong of Gang Wars (1976), Out for Blood (1992) and Deadly Target (1994), among others - could have been played by Mako, if he hadn’t died in 2006. Actor Darren Shahlavi - so memorable as the baddie in Bloodmoon (1997) passed away in 2015 and the film is dedicated to him. With his passing, we’ve lost another actor/Martial Artist so integral to the fabric of the DTV action movies we’ve dedicated ourselves to celebrating. He will be missed.

On a lighter note, one of the highlights of the movie, appearing almost exactly an hour in, is when we see the actual kidney donor list. This might mark the first time we’ve seen an English-as-a-second-language attempt at a list of people’s names. We have Varko Bosilhoc, Consuela Pym, John Smythe II and even Simon Rants III. Will this be important to the plot? Just wait and find out. Also there was a Boris Sharlyakov, but it looked like it said Borts Sharlyakov. We wish it said Borts. We really do. There are other names on the list, but those were some highlights. Maybe it’s just us, but we found that funny.

Some elements of Pound of Flesh are worth your time, but what’s good about the movie is dampened by the inability to see anything, the insistent usage of green screen/CGI, and some pretty dumb dialogue. (Let’s just say Kung talking about how much he loves coffee isn’t likely to rival anything said by Portia from The Merchant of Venice anytime soon). It’s kind of a mixed bag for Van Damme. It doesn’t change his standing in our eyes or anything like that, but with some simple tweaks, it could have been significantly better.

I agree. This movie was much-hyped, but it was a disappointment. I'm not sure if Van Damme is interested in doing 'fun' action movies like he used to earlier. As with Seagal, it seems like his heart simply isn't in it anymore.

Agreed, this was a disappointment. He needs to make another Timecop or Bloodsport type movie. Seagal hasn't cared since Urban Justice, now 10 years ago! Haha.