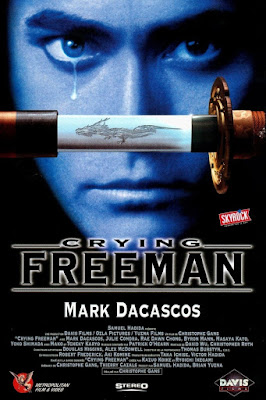 A mysterious hired killer named Yo (Dacascos) - known as the Crying Freeman because after he executes his victims he sheds tears - is seen practicing his deadly trade by a woman named Emu O’Hara (Condra). Awesomely, he even has exploding guns to help cover his tracks. Soon after their chance encounter, they’re both caught in the middle of a Yakuza war, with only the skills of Yo keeping them both alive. Detective Forge (Chong) and Detective Netah (Karyo) are trying to sort it all out, but Netah may have more going on than meets the eye. It may all seem simple, but in the world of the Crying Freeman, nothing ever is. Will the Power of Yo prevail? Find out today...

Crying Freeman is an excellent film that everybody should see. How it compares to the original Manga or Anime we wouldn’t know, but as a film in its own right it succeeds brilliantly. In other words, you don’t really need to know the source material to appreciate this. Maybe it helps, but there’s plenty to recommend even if, like us, you were unfamiliar with its origins and background.

Classily directed by Christophe Gans - known primarily for his Brotherhood of the Wolf (2008) - he balances sensitive and poetic passages that are downright painterly and beautiful with violent action setpieces involving everything from Martial Arts, gun-fu, blow-ups, and even a bow and arrow. Its artistic soul meshes well with the violence. The overall effect is intoxicating and adds up to be, we believe, a must-see.

Since this is quite obviously a work where the filmmakers clearly had high standards of quality, the whole thing seems solid and professionally made on every level - writing, directing, and, notably, the cinematography.  It’s all very solid, and it’s comforting feeling you’re in competent hands.

Naturally, fan favorite Mark Dacascos shines in the role that he was perhaps born to play. Co-star Julie Condra must have been impressed - they later married. They are backed up by some familiar names: Rae Dawn Chong and Tcheky Karyo are on board and acquit themselves well, though, interestingly, Condra and Karyo were overdubbed by Deborah Kara Unger and Ron Perlman, respectively. Other B-Movie stalwarts are here to be found too, such as Byron Mann and Jerry Wasserman (check out our Virtual Assassin review for the reason why we’re always pointing out these unsung actors) - and lest we forget fan favorite Mako. 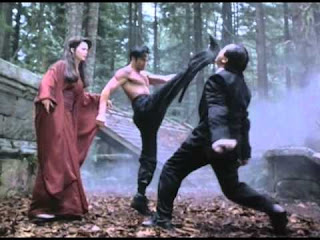 A little over an hour in there’s a bit of a lull, but that’s common and to be expected. That’s really the only criticism we have of Crying Freeman. And unlike most of its other brethren from 1995, this seems far more timeless. Shockingly - criminally - this didn’t receive a U.S. VHS release during the video store era, and only came out here on DVD quietly in 2008, and that release is now out of print. There are some fine international releases out there, and even a Blu-Ray now. But why this didn’t come out here when it would have done the most good for its reputation is puzzling and maddening. I guess it’s all part of the adventure of movie watching and collecting - you never know what you’re going to find, or where you’re going to find it. Occasionally you turn up a gem like this.

Crying Freeman should be more well-known, especially in the U.S. We absolutely recommend this enjoyable winner of a film.

Comeuppance Review by: Ty and Brett
Posted by Ty at 9.2.17

Big fan of this flick. I remember catching a bit of the finale when I was on holiday in Paris and spent ages trying to track down what it was.

It's actually pretty faithful (initially) to the first volume of the manga series. The major change is that the original is set in Japan and this is set in San Francisco. There's lots of visuals and scenes that are taken verbatim.

The manga ends up going in very strange directions. Yo does leave the organisation, he actually ends up taking over the 108 Dragons gang as their leader! There's submarines, giant women, lots of tattooing. It's a lot of fun.

Thanks for the info about the faithfulness to the Manga. We appreciate it. We're glad there's fans of this movie out there.

Yeah great film I saw the anime first and was happy with how faithful this adaptation was (much better than Dragon from Russia).

Man I really loved this one. It really surprised me at how good it was. It's never gotten an official release here though, which is a real shame. I tell everyone I can to see this if they can ever find it. I think I ultimately watched it on YouTube. Great review!

Anonymous: It's a great film for anime fans or action fans who might not know about the anime.

RobotGEEK: Thanks! We found a bootleg DVD but it was wonky and defective. Thankfully we watched it on Youtube too. It's now available as a PAL region 2 Blu-Ray.