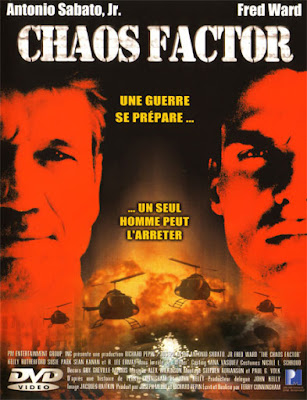 Jack Poynt (Sabato Jr.) is a military man who specializes in ‘demo excavation’, in other words, sweeping mines out of Cambodia and saving the local villagers. Jack Poynt’s life changes forever when he comes across an Army medic’s diary that was written during the Vietnam War.

It turns out that a fellow soldier named Maxwell Camden (Ward) committed all sorts of wartime atrocities. Now, in the present day, Camden is a big muckty-muck in the government and he will go to great lengths to stop the diary from going public - including sending his goons (one of which is Sean Kanan) out to torture and murder people. Along the way, Jack crosses paths with a ruthless, beautiful female assassin that seems like she belongs in another movie named Kim (Park). But the two will have to team up to defeat Camden and the baddies before a big arms deal goes down between China and Vietnam...and time is running out. Will Jack make his Poynt? Find out...

The Chaos Factor is kind of a middle-of-the-road affair. On the one hand, it’s a PM production, so there are plenty of car chases, explosions, shooting scenes, and a decent amount of action. It’s also not overly junky in the production values department and there is some nice cinematography from Jacques Haitkin.

On the other hand, it’s supposed to be a serious-minded drama at other times - a governmental thriller with the haunting echoes of the Vietnam conflict infusing it all. Not that that would be a bad thing, of course, but all the drama is undercut somewhat by the odd choice to have footage from Seagal’s Marked For Death (1990) all over the action scenes. Tip to filmmakers: if you’re going for seriousness, don’t resort to Seagal footage spliced into the movie.

Adding insult to injury, the footage doesn’t match very well. You don’t have to be particularly eagle-eyed to know when we’ve whiplashed into suddenly watching a car chase from Marked For Death. Presumably, if you’re watching the Chaos Factor, you’ve already seen Marked For Death - has anyone watched them the other way around? Regardless, this was the directorial debut of Terry Cunningham, so perhaps we should cut him a bit of slack, almost like you would for someone learning on the job. Thankfully, Cunningham had good people around him like Haitkin and Fred Ward who could dress things up significantly. 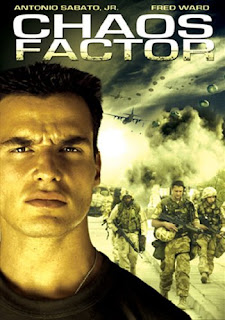 We enjoyed most of the scenes with Susie Park, mainly because that’s when the movie becomes out-and-out action. Sean Kanan strongly resembles James Spader, and fan favorite R. Lee Ermey is underutilized...but would you believe he was cast as an Army Colonel? I know, wonders never cease.

That brings us to Sabato Jr., who is a solid leading man for these types of things...though it should be noted that (in this movie at least) he has a tramp stamp. We don’t believe we’ve ever seen a male action hero with a lower-back tattoo before. Much like how the Seagal footage undercuts the seriousness of the movie, Sabato Jr.’s tramp stamp undercuts our confidence in him as an action hero. It starts off as Sweepers (1998), becomes Broken Arrow (1996), then becomes No Way Out (1987), then becomes Yes, Madam (1985), all with a dusting of a Steven Segal movie from ten years previous. If this sounds like something you're up for, well here it is. The DTV world in 2000 was a confusing place indeed.

Haven't seen it, will check it out. I always enjoy a Southeast Asia setting.

Sad that Antonio Sabato Jr has become a nutjob in recent years(he's supportive of Trump and he's spouted some really stupid anti-immigration BS, ironic considering he was born in Italy himself).

Venom: Now is the time for you and America to re-learn the lessons of Thrill, the exciting rollercoaster movie with Antonio. Lol. Review coming soon.

Worst of all, there wasn't only the car chase from "Marked for Death" in this movie. Another car chase earlier in this movie, is taken from the movie "Species".

So much recycled footage in this. Haha. They should've made their own car chases!

That's also not the only time the car chase from Species was used in another film, the Jim Wynorski film Project V.I.P.E.R. also used it.

Yeah. It's sad that PM began having financial problems. I always wonder what their movies would be like, if they still existed today.

Venom: Check out Rangers and Gale Force for an extreme amount of footage from other movies. It's pretty funny.

Stunt Fan: Yeah, we wonder that too. PM was like a star that burned brightly and quickly but also faded away. But all poetry aside, they left us with an outstanding body of work that we can watch anytime.