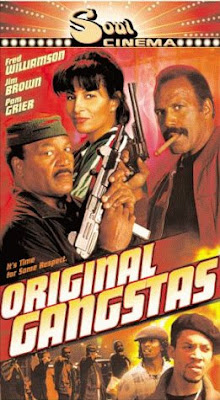 The town of Gary, Indiana is in dire straits. The old mill shut down, businesses and industries left, the Jackson family vacated, and the good people that remain are under the thumb of the rampant crime that proliferated in the wake of the economy collapsing. And this isn't even a post-apocalyptic thriller. When local grocery store owner Marvin Bookman (Brown Jr.) is assaulted and shot by local punks, his son John (The Hammer), a former football player, flies in from L.A. to try and help. After seeing just how bad the situation has gotten in Gary, he reunites with his old friends Jake Trevor (Jim Brown), Laurie Thompson (Grier), Slick (Roundtree) and Bubba (O’Neal). The thing is, back in the old days they were in sort of a “mark 1” version of a gang, the Rebels. They would get involved in essentially harmless no-goodery. Now gang violence involves drive-by shootings and near-constant brutality. Hence, the ORIGINAL GANGSTAS re-form to save the day. What with the new Rebels, as well as rival gang the Diablos, causing mayhem all around, the OG’s certainly have their hands full…but will they triumph over the young punks? Find out today…

If we’re fans of any two things, it’s these two things: young punks getting their comeuppance from the older generation, and Fred Williamson. Regular readers of this site will note that both have been prevailing themes for us for years. To our delight, a movie finally came along that ties both of them together: Original Gangstas. Sure, it may have its flaws, but it also combines two other genre mainstays we all love and enjoy: the ‘cleaning up the town’ movie and the ‘assembling a team’ movie. Add to all that an outstanding B-movie cast, and you have an entertaining romp. 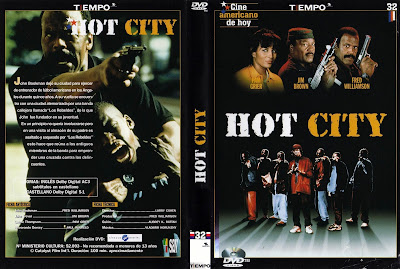 The cast truly is one of a kind, and the concept pre-dates The Expendables (2010) by a good 14 years. We didn’t even mention Isabel Sanford, Weezy herself, as Marvin Bookman’s wife, and she gives a spirited performance. Also on board is Paul Winfield as Reverend Dorsey, a man caught in all the crossfire. All of what’s going on around him might seem awfully familiar, as Winfield was in Gordon’s War (1973), as Gordon himself. Could this be where Gordon ended up? Fan favorites Charles Napier, Wings Hauser, and Robert Forster - enough to support their own movie right there - are also on board, but in glorified (or not so glorified) cameos.

All of these familiar names are appreciated, and add to the fun and the texture of the overall movie, but, as often happens, when there’s TOO many people, roles have to be necessarily small and characters get lost in the shuffle. Even the great Roundtree and O’Neal are essentially second fiddle. We noted the young Shyheim Franklin (credited as solely “Shyheim” in the opening credits, but with the full name for the end credits) as Dink. He stood out, of all people, amongst the pack.

There are a few things you can always count on with a Fred Williamson flick - his cool, his charisma, he’ll be chomping a cigar, and there will be a live performance in a club or bar. In this case, he got the Chi-Lites, which was a good get. Like a lot of other modern-day Freds like Down N’ Dirty and On The Edge when the older actors are on the screen, classic soul music plays. When the young punks are on (and they actually get called punks by their elders), rap plays. So, to counter the Chi-Lites, in a party scene we can see Bushwick Bill and Scarface, though they don’t perform. That symmetry could only come from the mind of the great director Larry Cohen. Even we don’t know if that last sentence was sarcastic or not, but Fred is credited as co-director of OG’s. 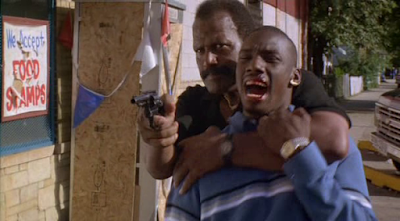 Other things we learned: Jim Brown looks badass in a British Knights jacket, there is an actual place called East Chicago, Indiana (where some of the movie was shot), and if you don’t like Fred Williamson, you probably have mental problems. While OG’s would never come near the movie theater today, it certainly did back then, which must have been nice for everyone involved. I (Brett) even remember seeing commercials for it on TV when I was 15 or 16. It could certainly be said that this movie set the stage for the DTV Freds that came in its wake, as stylistically it is very similar.

Though OG’s predates the show South Park (only by one year, however), there are dramatic and tear-filled readings of the line “they killed Kenny!” - other mentions of people killing Kenny are said throughout the film. We know it’s just a coincidence (or IS it?) but it did kind of help to keep the movie in the goofy zone. There are people out there that are disappointed that OG’s wasn’t some sort of serious treatise on the issue of gang violence. We think the filmmakers should have gone more in the other direction: how awesome would it have been to have seen Weezy mowing down gang members with a machine gun? Or even doing Martial Arts…dare we suggest we missed an opportunity to see Weezy-Fu? Well, we should be happy with what we have.

For true OLD school Blaxploitation - though all involved probably hate that term - in the mid-90’s, pretty much the only place to turn is Original Gangstas. It provides enough entertainment to sustain its running time (the cast alone could propel pretty much anything), and DTV/action die-hards should enjoy it, or at least appreciate it.

This was a middle-of-the-road movie for me. It could have been worse, but it could have been better also. The Hammer wasn't satisfied with the results, saying that he should have directed it himself.

Damn! Totally forgot Cohen did this one! I actually remember being uber excited when this came out, and was pretty let down. But! That was my young teenage brain thinking. I wonder if I'd appreciate it more now? Thanks for the reminder guys and great review! Gonna seek this out!

Roger: Fred is probably right, we would've liked to see what the Full Fred version would've looked like.

Venom: Yeah, we do remember seeing commercials for Adrenalin: Fear The Rush but then again it might've been for K2: The Ultimate Rush.

RobotGEEK: Thanks for the kind words. Yeah there was a lot to getting pumped up about with this cast and director teaming up after all these years and we see your point. Glad we could remind you of this. If your opinion changes, get back to us anytime.