Everyone’s afraid of super-powerful gang boss Mr. Tin (Tien). He’s got three bumbling goons fumbling around for some secret microfilm that could sink his gangland operations: Aspirin (Hoi), Strepsil (Sham), and Panadol (Hark). But there are two Hong Kong cops that aren’t afraid of him at all - Inspector Ng (Yeoh) and her partner Inspector Morris (Rothrock)! These “lovely and lethal ladies” will stop at nothing to bring down Mr. Tin - and that means using some of their most powerful and effective Martial Arts moves to get the microfilm. Will they be successful in ending his reign of terror?

Yes Madam is an extremely entertaining winner, thanks mainly to Corey Yuen’s dynamic and over-the-top energetic filmmaking flair, and the two leads. Michelle Yeoh is a joy to watch as the beautiful but tough and no-nonsense cop with the acrobatic and graceful moves. Counterbalancing her sweet style is fan favorite Cynthia Rothrock as the pugilistic Morris, who gets up in people’s faces and has a harder style. Tsui Hark is known for being a great director, and it’s nice to see him in front of the camera, bringing his unique look and quirkiness to us Westerners. Sammo Hung, who also had a part in producing the film, has a pretty silly cameo as an elderly gentleman in an old folks home (!) - it looks like he just put some talcum powder in his hair to gray it up and off he went. Again, it is always nice to see him. In an interesting connection, the climax to this movie bears a similarity to the much later Hung vehicle Kill Zone (2005). 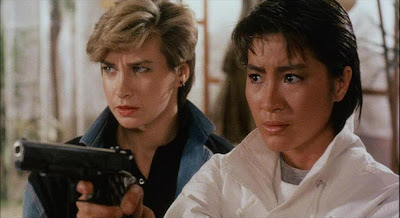 The final brawl at the end is awesome and is a highlight in an already lovable movie. Yes Madam contains plenty of that wacky, silly, knockabout humor that many HK films tend to have. It doesn’t bother us, we think it’s something certain audiences expect. But just be advised that being far from a grim and dour cop drama, at times this resembles more of a slapstick comedy. But it’s all in good fun and is pretty harmless. The movie as a whole has a very cool 80’s vibe, what with the outfits, popped collars, club scenes and aerobics. That was a big plus for us. Add to that the very cool music by Romeo Diaz, and you have a winner. What this movie may lack in terms of a coherent plot (who cares anyway?), Corey Yuen more than makes up for with his style, which has energy to spare. Yuen has had an amazing career - from directing No Retreat No Surrender (1986) and No Retreat No Surrender 2 (1987), as well as the all-time classic Above The Law (1986), to his later Jet Li films and The Transporter (2002). He was also Martial Arts choreographer on American Shaolin: King of the Kickboxers II (1991), and supposedly had an uncredited bit in another all-time classic, The Man From Hong Kong (1975). And these credits barely scratch the surface. And Yes Madam remains another satisfying gem from his fevered brain. 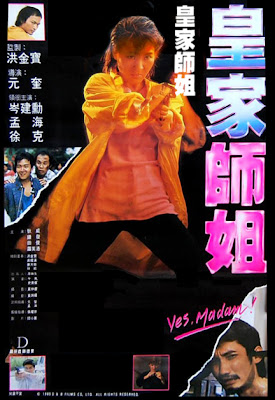 Also there seems to be some confusion between this and the In The Line Of Duty series. From what we can gather, this was NOT part of that series. It was, however, confusingly, called “In The Line of Duty 2” in some territories. While many entries in that series are worth seeing, especially the first one, this is actually not part of it. Just a confusing retitle to cash in on the success, popularity and beauty of Michelle Yeoh.

Needless to say, Yeoh and Rothrock make a killer team and for that reason alone Yes Madam is worth seeing.

Nice review! This one has been a longtime favorite of mine. I blogged about it a while back and yeah, the multiple titles thing is confusing as hell, even for someone who's been following the series (it IS part of the ITLOD series, btw). Here's the first paragrapgh I wrote about it,

"The story surrounding the various titles for this seminal "Girls with guns" film is about as checkered and downright confusing as any I've ever come accross. I first saw this film in 1989 (dubbed in English as Police Assassins 2) and to this day, I'm still a little fuzzy about it's genesis. To the best of my knowledge it was filmed in 1985 as Yes Madam, but shelved because the Producers at D & B (a new and short lived Hong Kong film company) considered it unreleasable (!). When the semi sequel, Royal Warriors was a hit the following year, Yes Madam was dusted off and finally released as R.W.s sequel. In other countries, Royal Warriors was known alternately as Police Assassins and In the Line of Duty, so Yes Madam was similarly retitled once again as the sequel, even though it came first. Got that?"

Michelle Yeoh (Khan) then married producer Dickson Poon and retired (briefly) from the biz. Cynthia Khan was then introduced as Michelle's replacement. Her first film, 'Force of the Dragon' was retitled 'In the Line of Duty 3' to tie it in with the two Michelle flicks with 'The Witness' being aka 'ITLOD 4' and so forth...

Thanks for clearing up the confusion about all the titles! Haha.

Also it is a Rothrock winner.

There was yet ANOTHER Line Of Duty film with Khna called LOD5:Middle Man.

Thanks for the info! We appreciate it.

And also In the Line of Duty 6 aka Forbidden Arsenal lol! There may also be a 7th...

Lol! So many movies!