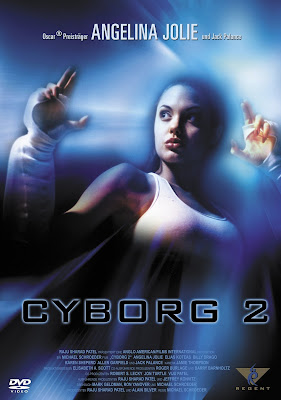 In the year 2074, two rival companies, Pinwheel and Kobayashi, vie for supremacy in the cyborg-making biz. By this point in the future, cyborgs have reached amazing levels of sophistication and humanity, including having emotions. Pinwheel decides to get the edge in all this corporate intrigue by creating Casella Reese, known by the nickname Cash (Jolie). In her design, her superiors programmed in the directive to go to Kobayashi Corp. and detonate herself, wiping out the competition - permanently. A higher-up named Mercy (Palance) sees what’s going on, and allows Cash, and her human love interest, Colt (Koteas) to escape. Pinwheel doesn’t like this, so they send a psychotic bounty hunter named Danny Bench (Drago) to track them down. But will human-robot love conquer all in this treacherous world?

The filmmakers behind Cyborg 2 decided to take a different tack from the first one, thankfully. Despite the fact that the cyborg Cash has some sort of implanted memories of Van Damme from the first outing, this particular cyborgian opus has a much different vibe than the first one. We applaud the fact that there are actually some interesting ideas at play here, not the least of which is the nature of humanity. While our normal mode of pondering such weighty questions about life would come from re-watching T-Force (1994), the injection of some much-needed intelligence scores the movie some points. As does the set design and overall look, which is relatively upmarket for a DTV sequel to an Albert Pyun-directed Van Damme movie.

On the bad side, it could have used some more action. The museum fight with Karen Sheperd was way too brief and didn’t live up to its potential, but overall we do get a decent amount of Jolie-Fu, which was nice. All the best scenes in the movie feature Jolie front and center, and it’s easy to see why - she has an almost mesmerizing effect on the audience. That doesn’t stop the pace from becoming slow at times, of course, and a lot of the cooler imagery is undercut by the dinginess of the “future”. So the audience gets yanked in a bunch of different directions, which maybe was on purpose (?) - but, on top of everything else, they found time to have some Punchfighting between Koteas and Billy Drago, which moved things in the right direction. 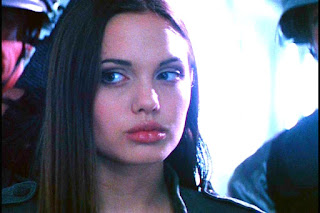 As for Jack Palance, we’re glad he’s here, but for 90 percent of his “screen time” it’s just that: a close-up of his mouth on a TV screen. When he does show up in the flesh, he gets by far what is the best line in the movie, so it all pays off. Why visions of him looking forlornly at his lost love were intercut with the Koteas-Jolie sex scene and not placed somewhere else isn’t known, but it’s oddly similar to when David Warner was intercut with a Pamela Anderson sex scene in Naked Souls (1996). That aside, there’s only so much of Palance’s teeth that any normal audience would want to stand.

As per usual, Billy Drago is the baddie, Sven-Ole Thorsen is on hand as “Doorman” , and the computerized corporate intrigue certainly seems modeled after the Apple and Microsoft battles. Maybe one day they’ll use deadly cyborgs to one-up each other. There’s even a Cyborg dog - a cy-dog if you prefer - and we felt that could become a movie in its own right. Tailor-made for the pay channels of the day, this could have played on Cinemax in the mid-90’s right before Nemesis (1992) and right after American Cyborg:Steel Warrior (1993). It all comes to a surprisingly sweet and touching ending. I guess you never know what to expect from the Pinwheel Corporation.

Director Schroeder also was the man behind Damned River (1989) and went on to do the third and final Cyborg movie, Cyborg 3: The Recycler (1994), the following year. Yes, there is a cyborg trilogy. As the main star, a young Jolie is certainly easier to look at than Van Damme, and we appreciated a lot about the overall production, but, as usual, a little more action in the mix would most likely have given the reputation of Cyborg 2 a brighter future.