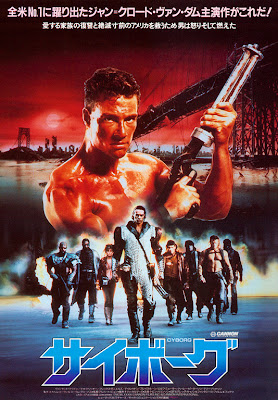 
In a desolate, post-apocalypse world, Gibson (Van Damme) is a fighter hired to escort a cyborg named Pearl (Haddon) who has a potential cure for a plague that is decimating what’s left of the world’s population. They have to get from New York to Atlanta, but along the way there are murderous baddies who want the cure for themselves. These so-called “Pirates” are led by Fender (Klyn). But Gibson has his own reasons for wanting to take down the evil gang. Will Gibson fight his way through the obstacles to save the world?

Released in the golden year of 1989, the same release year as the far-superior Bloodsport (1989), Cyborg is basically an afterthought for Van Damme in ‘89. It’s like Cannon had some excess film so they gave it to Albert Pyun to play around with. Bad idea. While Cyborg, amazingly, was theatrically released and spawned two sequels, it turned out to be the last theatrically-released Cannon movie in the U.S. It’s not a great note to go out on. 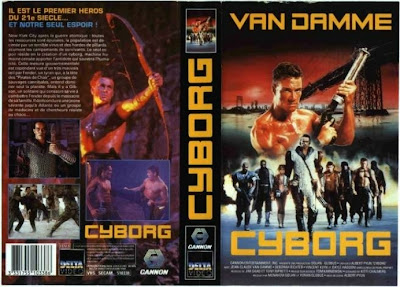 Pyun has proven time and again he’s not a talented filmmaker, and Cyborg really is no different from any post-apocalyptic slog. It’s in the same vein as American Cyborg: Steel Warrior (1993), Neon City (1991), or any number of Ron Marchini movies. The characters have wacky, ragged costumes, and there are a lot of capes on show. Capes are going to be huge in the future.

As far as the cast, besides Van Damme, we have Klyn as Fender, but due to the fact that he resembles a cross between Mario Van Peebles and our current president, we kept calling him “Mario Van Obama”. Seeing as Van Damme plays “Gibson Rickenbacker”, Klyn plays “Fender Tremolo” and Alex Daniels plays “Marshall Strat”, apparently also in the future you get a guitar name. Ralf Moeller is on show looking like some sort of ridiculous, long-haired caveman (named Brick Bardo of course, Pyun’s ubiquitous trademark name), and in his first movie role, none other than Matt McColm plays one of the Pirates. 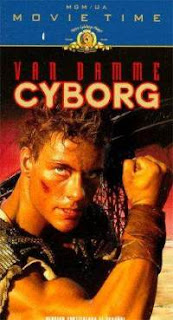 So you’d think a movie with Van Damme, Moeller and McColm would be a surefire winner, but sloppiness, nonsensicality and a defiant lack of character development sink that quickly. There are some cool, bone-crunching fight sequences, but not enough to save the movie. These guys running around yet another abandoned warehouse isn’t all that interesting, but then there are some cyborg effects and a “Passion of the Van Damme” crucifixion, but none of it seems very competently handled.

If you know the Albert Pyun style of filmmaking (and if you do, we’re so sorry), Cyborg is more of the same. Personally we believe this is one of Van Damme’s weaker efforts, especially from the prime of his career when he was firing on all cylinders.

Yeah, just rewatched this the other week. Originally watched it when I was 15 and didn't like it but wanted to give it a second chance. Sadly, still thought it was massive missed opportunity. The film just drags so much when compared to other post-apocalyptic films like Mad Max 2.

You're right it was a waste of Van Damme during his prime. The bit you said about "Cannon had some excess film so they gave it to Pyun to play around with" isn't far from the truth. It was quickly put together in the wake of the failed productions of Masters of the Universe 2 and Spider-man.

We can't agree more with your comment. This was pretty weak all around. Thanks for the info about Cyborg being a rushed production. Albert Pyun has always done movies like that.

I must disagree here, it is one of my fave Van Damme movies, not because its a masterpiece, which it isn`t, but there is more going on with this , for me. The atmosphere, the score, which i love, and the dirty, truly apocalyptic feel it has.
Gues i have to do a review on this soon, to express myself.
I think thats part of the fun reading reviews, the different perception of the same material.

We see your point, we just disagree. If only the movie was more coherent. We look forward to your take on it!

Thank you for noticing the guitar names! Hilarious. I have to say that I'm a huge fan of Pyun's "Sword and the Sorcerer" kind of a cult classic and the only film in his library anyone remembers fondly.

I know Cyborg has many fans, but I didn't like it when it first came out and I can't really see that changing now, I must get in on the cape business though and make some money before the apocalypse!

Well, I certainly got my comeuppance with that review! Yeow. Did you see my director's cut of Cyborg?

Markuswelby1: The guitar names are ridiculous! Haven't seen Sword and The Sorcery, will have to check it out.

A Hero Never Dies: Haha, Capes and chainmail are the future!

I actually kinda liked this film, the disjointed feel comes from the fact that this film was originally intended as a sequel to that He-Man film, but there wasn't enough money to finish it, so Pyun used the sets built for that film and made Cyborg, despite all that, I found it to be perfectly watchable(though the "crucifixion" scene was pretty laughable) it's certainly better than "In Hell" and "Death Warrant" anyways.

Albert Pyun: Thanks for dropping by our site! It was really nice of you to take the time to leave a comment. It's awesome that you are such a great sport.

Venom: We didn't know about the connection to this and Masters Of The Universe. Thanks for the info!

It seems like they're are two types of people in the world: People who like Cyborg and people who don't. We tend to like In Hell and Death Warrant because those are fully fleshed out.

Yeah, the Director's Cut is slightly better but not a great improvement. All the time codes, random editing quirks, and bad dubbing present in the DC have a certain charm about them. The theatrical cut is pretty bad though; easily my least favorite Van Damme movie.

We definitely agree. Also one of Van Damme's weakest was Derailed.

Also, I just found out that Van Damme is in the Expendables sequel(and will be playing a villain) along with Chuck Norris, Scott Adkins, and Liam Hemsworth. Nicholas Cage and John Travolta are also rumored to be appearing in the film.

Dr. Blacksteed: Yeah, we could believe it either. Happy he was a good sport about our review.

Venom: Agree about Nowhere To Run (The ending is absolutely lame) Never saw Black Eagle, but saw a trailer for it, and it looked pretty silly. Also looking forward to seeing Van Damme and everybody you mentioned in The Expendables! Should be a fun sequel.

I'd recommend you avoid Black Eagle at all costs, even the great Sho Kosugi couldn't redeem that boring crapfest.

Will definitely avoid it. Big Sho fan though.

Pyun is really an underrate director, in my opinion. NEMESIS, for example, is insane and has one of the greatest onscreen shootouts ever filmed, for my money.
Cyborg is not typical Van Dammage territory, but it has mood and atmosphere that could kick the ass of many modern films of similar breeding. The crucifixion/resurrection sequence is outstanding.

Hmm, Will have to watch Nemesis. We have seen other Pyun movies and they are not that good. Especially Bloodmatch.

Wow! There's a nice debate going on here. lol. I'm on the side that actually likes Cyborg. Sorry Ty! lol. I guess since I knew that the sets and costumes were used after the un-filmed M.O.T.U. sequal and the un-filmed Spider-Man movie Pyun was also supposed to make around that time for Cannon before they got canned as well as the fact that Van Damme had taken over editing duties himself to make it more box office friendly (in his eyes)after shooting wrapped, so the theatrical cut is Van Damme's doing and not what Albert Pyun had intended.
This has always been one of those "love it or hate it" Pyun films for everybody. I actually enjoy a lot of both the theatrical and directors cuts. Call me crazy! lol. And dude, you need to see Nemesis. It rules with insane and crazy action. It's one of my favorite movies ever. I even have a poster of it up in my home. I think you'll dig it. I actually got my hands on the Laserdisc in widescreen just the other day. Cannot wait for it to arrive. Can't wait to hear your view on it!

The power of Cyborg stirs passion and debate....Van Damme surely tried to fix any potential problems in the editing room but this goes to show when you get two creative powerhouses like Van Damme and Pyun, the results are unpredictable.

Another favorite Van Damme film of mine. I remember every single scene of it, like I've seen it yesterday. God, I miss those days...

That is a great feeling!

Could not disagree more with this review. The first Cyborg in terms of a pure, entertaining, popcorn action flick? Simply amazing!

It has great action and fight scenes, great synthesizer soundtrack, great settings & atmosphere, classic revenge plot, Van Damme had great energy and on-screen presence, an intimidating villain, etc. The story isn't much but its simple, sweet, and effective. It does not try to be anything else and it SUCCEEDS.

C'mon fellas....the guy's adopted family was brutally murdered before his eyes, and now their killers seek to ruin the last hope of a cure for a world wide plague. If you couldn't appreciate this and honestly expected something "deeper" regarding his motivation for vengeance, then that's on YOU and not a problem with this film.

In regards to Van Damme's acting, while his english was not very good at the time, he still did great. Taking a cue from Arnold in his earlier works, the majority of his "acting" was through body language instead. Which is really kind of a lost art in this modern era where movie audience's expect their lead characters to be highly extroverted with pages of dialog in each scene. However, in the 1980's the introverted, stoic hero type character was much more prevalent(Conan, Rambo, etc) and JCVD pulls it off quite well. His character's quiet brooding over the loss of his loved one's and passion for vengeance is always believable. I love the way the flashbacks & soundtrack when revealing the character's past is used here also.

Lastly, while many film makers are tempted to try their hand at the post-apocalyptic world, few have ever gotten it right. When the subject of such films comes up, viewers NEED to give this one a look. It is simply one of the few quintessential examples of the post-apocalyptic movie done right. All the settings used in the film pull off the feel & atmosphere of a world gone to ruins in believable fashion.

Overall, this is one of my favorite movies of all time. Its stylish, action-packed, and underrated. Van Damme IS firing on all cylinders in this one.

We love your passion about Cyborg! We appreciate you taking the time to write such a effusive comment. However, we respectfully disagree.

Van Damme did his best, but Pyun mishandled it. It could have been a lot better.