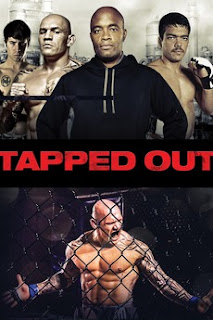 
When Michael Shaw (Hackman) was 12 years old, some carjackers shot and killed his parents. During the incident, the boy took note of a tattoo on the neck of one of the baddies. Now in high school, he’s understandably moody and acts out by partying and neglecting his schoolwork. Caught by the cops for excessive “party rocking”, Michael is on his last chance. Thanks to Principal Vanhorne (Kove), Michael gets a chance to do his community service hours at his old dojo. When he was a kid, he was a Karate champ, but after the murder he let it all slide. When Reggie (Biehn), the dojo master, first gets a hold of him, he has him do janitorial work. But Michael starts to see the value of training in Karate again. When taken by Reggie’s niece Jen (Brown) to an illegal, underground MMA fight, Michael recognizes the tattoo he saw so long ago - it just so happens to belong to the reigning champ, a gigantic, unbeatable meathead named Dominic Gray (Soszynski). So, despite their vast weight differences, Michael goes into extreme training mode so he can beat Gray in the ring to avenge his parents’ murder. But will it be Gray or Michael who will be...TAPPED OUT?

Tapped Out is essentially No Retreat No Surrender (1986) for the Facebook generation. Elsewhere online it has been described as Batman (1989) meets The Karate Kid (1984), and it has a plot action fans have seen countless times before. Should we be applauding the fact that they’re still making movies like this? We’re truly not sure. We guess that’s pretty cool. The movie has almost as many training sequences as Green Street 3 (2013), and because Michael has to work his way up the ranks of all the “boxcar” underground fighters, and squeeze in some plot and dialogue, the whole thing is a bit longer than it needs to be.

This Cody Hackman kid is likable enough, and it also stars fan favorites Martin Kove and Michael Biehn, so the DTV lineage is there, at least. Interestingly, in the movie it says that the murder of the parents occurred when Michael was 12 years old. Then someone later says “that was seven years ago.” If our math is correct, that means Michael is a 19 or 20 year old high school student. Maybe things are different in Canada, but this struck us as odd. Maybe he stayed back a few times.

The whole outing is shot and edited well, and has a very professional look to it. It’s clear the filmmakers, despite the derivative grounding of it all, tried to put in some emotion and quality to the overall proceedings, which we appreciated. It doesn’t look or feel like crud, as so many of its MMA-based competitors do. The fact that “Karate Boy”, as our hero is called, tries to take on these MMA guys in the ring may feel incorrect, but it’s kind of a throwback to the underground Punchfighting movies of the 80’s and the first part of the 90’s. The ring announcer bellows “Let’s go to waaaaaaaarrrrr!”, which, it has to be said, won’t be sending Michael Buffer into his panic room anytime soon.

For a decent and watchable - but nothing more - example of a modern-day DTV UFC/Underground Fighting movie, Tapped Out should fit the bill. But it seems the days of Karl Brezdin are long over, even if that spirit, in some new form, lives on.