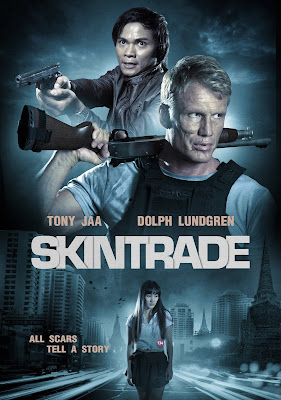 
Nick Cassidy (Dolph) is a tough New York cop with a loving wife and daughter. When a Serbian gangster named Viktor Dragovic (Perlman) and his three sons appear on Nick’s radar, representing many illegal interests, not the least of which is human trafficking, Nick makes it his mission to shut them down. It becomes personal when the baddies kill his wife and daughter and leave him for dead. Now fueled for revenge, Nick travels to Thailand, and while there meets up with a Thai cop named Tony (Jaa). At first they are enemies based on misunderstanding, but eventually they team up to end the Dragovic criminal empire - permanently. Add to that some duplicity on behalf of a man named Reed (White), Nick and Tony have their hands full. Will they both put an out-of-business sign on the SKIN TRADE?

Dolph delivers what fans want with Skin Trade, and notches another positive on his ever-growing resume. Having starred in, co-produced, and co-written the film, Dolph has described it as a passion project. That he has two daughters of his own provided even more emotional fuel for him, and he even got involved behind the scenes with anti-trafficking organizations. While that is noble, and there is a tasteful title card after the film that informs us about trafficking, what we’re here for is the action, and there’s plenty of it. It’s all framed around what is probably our favorite plot, the revenge framework. 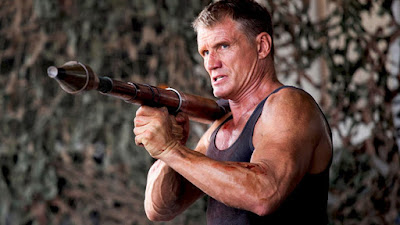 Dolph even assembled a dream cast for this one. You can’t do better than having Dolph, Tony Jaa, Michael Jai White (MJW as we call him), Ron Perlman and Peter Weller all together, can you? Weller’s part is necessarily restrained, but he does bring his classic voice and intensity to the role. Perlman, honestly, doesn’t get a ton of screen time either, but he makes the most of what he has. The Dolph-Tony Jaa fight amongst all the falling rice was a movie highlight, as was another dream pairing, the MJW-Tony Jaa fight.

It looks professional and non-junky, thank goodness, and the stellar cast only reinforces the “this could have gone to the theater here and probably did in other countries around the world” vibe. Dolph does walk away from an explosion, which is always cool, but sadly it’s a CGI explosion. While we really liked the movie overall, and there is plenty to commend within it, the use of CGI explosions, bullet hits, sparks, etc., plus the annoying use of cut frames was a bit bothersome. But it’s very clear the positives outweigh those minor negatives.

We applaud everyone involved, especially Dolph, for producing Skin Trade. On the one hand it has brutal violence and top-notch fights from the best in the business, and on the other hand it delivers an important message about one of the evils in the world today. The fact that Dolph and the gang found a way to marry those two together is impressive and noteworthy. Skin Trade is worth seeing and recommending.

I agree, this is one of the best movies of recent years. It seems like awesome action movies are shot all around Asia these days, recent examples being Headshot and Savage Dog.

We're waiting for Savage Dog to hit DVD in the US, we'll review it when it comes out.