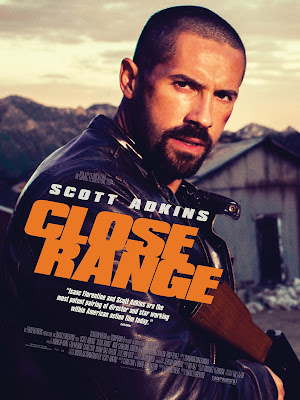 
When Colt MacReady (Adkins) rescues his niece Hailey (Lawlor) from imprisonment by an evil drug cartel, and kills a bunch of her captors in the process, the remaining baddies cross the Mexican border into America to come find him and get revenge. The cartel also wants back a flash drive that Colt has, so they lay siege to the house of Colt’s sister Angela (Keats). Colt goes all out, and falls back on his skills as a former soldier to keep them alive throughout the ordeal. They won’t be getting help from any of the local authorities, since Sheriff Jasper Calloway (Chinlund) is corrupt and in bed with the bad guys. Will Colt single-handedly save his family from the murderous cartel? Find out today…

Thank goodness for Isaac Florentine and Scott Adkins. They are two of the last pillars holding up the concept of DTV action movies. Where would we be without them? Close Range is an entertaining and streamlined outing and another feather in their already well-plumed caps. While wags may complain that the plot is thin and the dialogue lacking, we would put it in a different light: nothing is overly complex and there is plenty of room for the main attraction, which are the action scenes. So many times there are overly-complex dramatic motivations and fat when there doesn’t need to be any. Close Range dispenses with most of this and gives the fans what they want: thrilling and well-choreographed fight and action scenes. 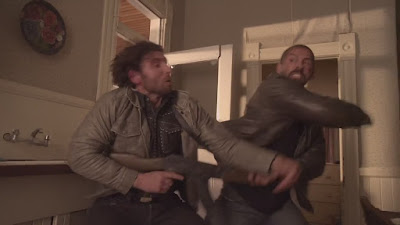 The whole movie opens with a bang and there’s plenty more where that came from. Fan favorite Adkins more than makes up for the lackluster El Gringo (2012), with this follow-up south-of-the-border tale. Shootouts, car chases, and fights ensue, but as we always say, we’re more fans of Martial Arts skill than gunplay, and of course there’s plenty of that too. In this post-The Raid (2011) and The Raid 2 (2014) world, not to mention Ong-Bak (2003) or The Protector (2005), fight scenes have become more “open”, and Florentine has taken this cue. Even the fact that the majority of the action takes place in one house is reminiscent of The Raid, as is the fact that the baddies get harder to beat as MacReady goes along. These are all good developments, by the way. Hopefully Florentine and/or Adkins will take these themes and run with them in the future. 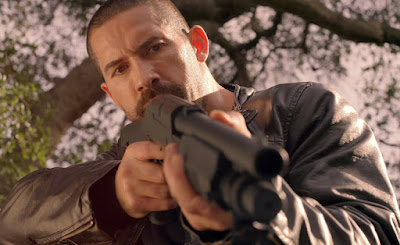 It’s all very well-lit and we loved the fact that you could see everything clearly. The Adkins fight scenes are the undoubted highlight here, and they don’t disappoint. In the 70’s, bad guys looked for “the ledger”, in the 80’s/90’s they looked for “the disc” and now in the present they look for “the flash drive”. In this way, Close Range is very much in the tradition of B-action movies of yore, and the Sergio Leone touches only serve to reinforce the pleasantly retro vibe.

For unpretentious, audience-pleasing fun, look no further than Close Range.

I agree. It wasn’t as good as Ninja II, but Florentine didn’t have as big a budget as he needed, so he had to do some padding to fill out the running time, e.g. the names of the gang members flashing on the screen. Florentine has said that there could be a sequel, but I’m not holding my breath.

Would be interested in a sequel, but less flashing of names of gang members.