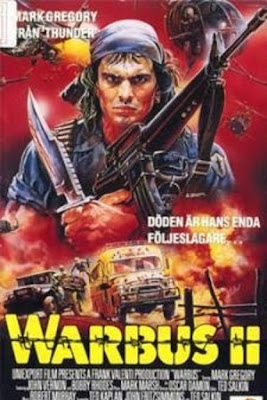 Johnny Hondo (Gregory), despite what you might already think, is not a cowboy. He is a former Green Beret badass warrior who goes to Afghanistan during the conflict there with the Russians. It’s his father’s dying wish for Johnny to find secret documents left behind in the old, abandoned Warbus. So, off he goes, and he shoots and/or blows up a lot of buildings and/or people during the course of his mission. He links up with a small team of like-minded good guys, led by Ken Ross (Vernon), which also includes Linda Cain (Gersak), a guy named Billy whose main talent is he can eat an unlimited amount of food, and a guy named Norton. Johnny Hondo also has to rescue a POW named Captain Bowie, and he enlists the help of a local boy to show him around. But will the WARBUS make its scheduled stops, and will the baddies be paying the toll?

Mark Gregory – both Trash and Thunder, as Italian exploitation fans already know – wears a cool leather coat and proceeds to decimate the population of Afghanistan, as well as the commies, in this A-Team-esque sequel to the original Warbus (1986). He shoots a lot of people, blows up multiple helicopters with ease, and few buildings are left standing. Despite all this, and the presence of John Vernon (who is, unfortunately, dubbed here), this is no Rambo III (1988). It’s actually rather forgettable. Not bad, mind you, but it’s kind of, “another day, another blow-up”. There isn’t much in the way of character development or emotion, but maybe that’s unfair of us to ask for that. It does have nice camerawork, as well as a catchy, military-style score by Elio Polizzi.

Speaking of Polizzi, he seems to exclusively score these Mercs-type movies, including Just A Damned Soldier (1988), directed by Ferdinando Baldi, director of the original Warbus. If Baldi – who also directed Ten Zan: Ultimate Mission in 1988, bails, that’s probably not a great sign. But as Ten Zan was his last movie, perhaps he wanted to go out on a Frank Zagarino-in-North-Korea high. So, in the event, we were left in the capable hands of Mr. Ciriaci. We’ve now seen and reviewed all four of his directorial outings: Delta Force Commando (1988), Soldier of Fortune (1990), and who could forget the convolutedly-titled classic Delta Force Commando II: Priority Red One (1990)? It’s probably fair to describe him as a workmanlike director, and he goes through the appropriate motions, neither offending with badness nor delighting with awesomeness. This particular Warbus just kind of rolls along until after about 90 minutes or so when it runs out of gas. 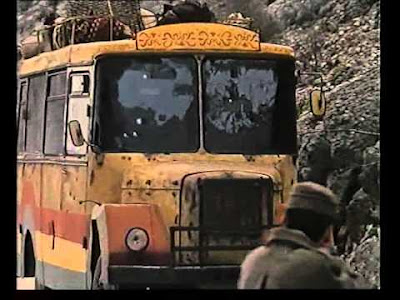 It’s funny the way they really make you wait for the Warbus until the final third of the movie – almost like they were under the mistaken impression that the audience really gives a flying flip. It’s not exactly like they’re unveiling something mysterious or legendary – it’s a school bus. The anticipation level you’ll feel as an audience member is roughly similar to what you may feel like while waiting for the actual bus. It’s not really too much of a revelation. The whole “fixing up the bus” scene may remind you of American Commandos (1985) or perhaps The Gauntlet (1977), but…so what? Also Johnny Hondo gets the Prerequisite Torture treatment and there are relevant references to Iranians and Pakistanis.

There are a lot worse things in the world to watch than Warbus 2 – we’d prefer this to almost any currently-produced Hollywood product. But, on the other hand, even in the world of Italian-made blow-em-ups, this would rank towards the mediocre middle. Only you can decide what your level of fandom and interest is – and along the way John Vernon, Mark Gregory, and plenty of blow-ups accompany your journey.

Mark Gregory’s last fling was a bit worse than the earlier Gregory-less Warbus. No one seems to know what happened to him after he quit the acting business. I would have rated this 2,5 because this is a rare rip-off of Rambo III instead of the ubiquitous Part II rip-offs. Otherwise, it’s a typical Italian shoot-’em-up.

I've always found funny the early scenes of Johnny at home (in "Montana, USA") hanging out with his cowboy pal - straight out of Brokeback Mountain.

Roger: We agree with your Rambo assessment. As far as Mark, it's a good question. Wonder where he went?

JT: He must have. He's a big Mark Gregory fan. Haha