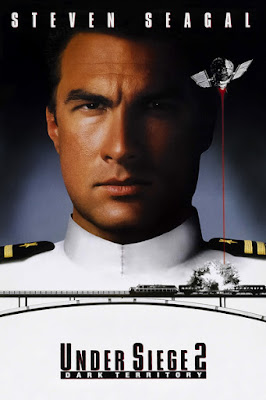 
Casey Ryback (Seagal) is (ry)back in this sequel where the ex-Navy SEAL chef has to save the day again. In the last outing, it was a ship. Now it’s a train. When Ryback and his niece Sarah (Heigl) board a train heading from Denver to L.A., they naturally think they’re going to take in the sights and relax.

Unfortunately, a psychopathic techie named Travis Dane (Bogosian) and his cadre of goons has commandeered the train. They’re using it as a mobile command station so they can hijack a satellite named Grazer, and ask for a billion dollars or else the Pentagon, and perhaps the whole east coast, will be obliterated. But the baddies didn’t count on one thing: the guy who’s “just a cook”, Casey Ryback.

Teaming up with one of the train’s porters, Bobby Zachs (Chestnut), the two unlikely allies then proceed to take down the goons, slowly making their way to Dane. But will they save the hostages, Ryback’s niece, and a large swath of America itself? Find out, as you relive the ultimate Kitchen Nightmare!

Much like how a young Kevin McCallister must have felt in Home Alone 2 (1992), Casey Ryback must have thought, “I’m under siege…again? What are the odds?” Or maybe he’s under siege all the time and these are just the two instances we know about. Maybe he’s tired of being under siege all the time. While we could go further into a discussion comparing Macaulay Culkin and Steven Seagal and all their surprising similarities, just think about how Speed (1994) was on a bus, and Speed 2 (1997) was on a ship. As hijacked train movies go, the good news is that Under Siege 2 is better than Derailed (2002). The bad news is that no movie can hope to compare with the majesty that is Hostage Train (1997). 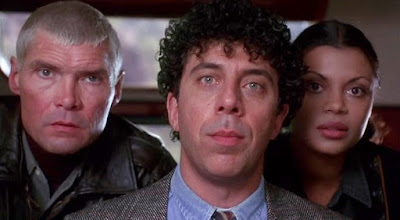 Seagal is backed up with a nice ensemble cast – Bogosian gets to ham it up as the diabolical baddie with the sweet typing skills, a young Katherine Heigl looks a lot like a young Candace Cameron (it was the heyday of Full House, after all, although to our knowledge DJ never threw a grenade at anybody), and Morris Chestnut puts energy into his sidekick role.

Other B-movie names that you know and love, such as Peter Greene, Kurtwood Smith, Nick Mancuso, Brenda Bakke, and Patrick Kilpatrick fill out the supporting cast well, and it was especially welcome to see a pre-Breaking Bad Jonathan Banks in there. But only Seagal gets a triumphant musical swell when he first shows up on screen. 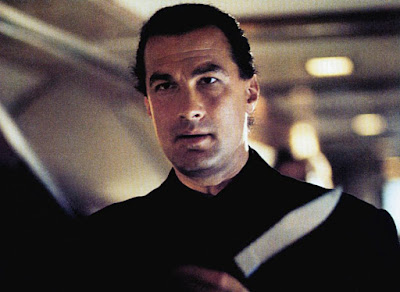 90’s fans will especially appreciate the fact that people smoke indoors, even the most high-tech government computers look like someone using Mario Paint, and Seagal is armed only with an Apple Newton. Well, that and several guns, knives, grenades, and his fists and feet. But the Newton does play an important role in the plot, and this was back when most people didn’t hold Apple in very high esteem.

Of course, all this great 90’s nostalgia has a flipside. If it’s possible, the movie has gotten stupider over time. What you remember fondly from back then may have soured in the intervening years. The dialogue is so repetitive, you could start watching at any point because the characters are constantly recapping what went on before, or restating what’s happening at that moment. And never mind the fact that a group of baddies take time out of their busy hijacking schedules to shoot a bunch of luggage with their machine guns. Why they felt the need to do this remains puzzling. 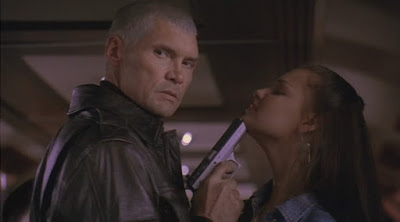 Under Siege 2 was notoriously cut to ribbons in the UK, so make sure to never buy any UK DVDs of the film. Watching a Seagal movie with the violent bits taken out is a bit like eating unflavored mush. Although it must be noted that while we are against the censorship, the BBFC director at the time was quite prescient and perspicacious when he commented that he didn’t like the “sadism” of Seagal’s violence. We’re impressed that he picked up on Seagal’s sadism so early on. We can only wonder what he would have thought of out-and-out sadistic crud like Kill Switch (2008).

Seagal n’ Smallwood only contribute one song this time around (usually they do at least two), “After the Train Has Gone”, and they even managed to rope in Gregg Allman for it. As for the movie itself, it remains watchable, but darn stupid. But, then again, if you wanted to watch something that wasn’t stupid, you wouldn’t be watching Under Siege 2: Dark Territory. The cast, the silliness, and the 90’s nostalgia make this train coast for the first 80 minutes or so, but then it starts to run out of steam.

I agree, it’s one of the underrated Seagal mid-90s movies that got a bad rep from both movie critics and action fans. I guess people wanted more Tarantinoesque dialogue and/or dinosaurs at the time.

Well it was the era of Jurassic Park and Theodore Rex....
There were a lot of Tarantino slogs but that was all part of the video store experience.