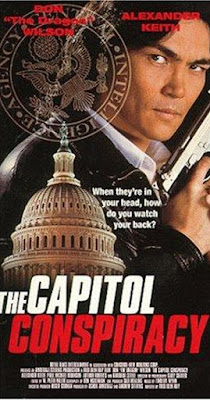 
"When they're in your head, how do you watch your back?"


Jarrid Maddox (Don) is a CIA agent in L.A. who is working through some past trauma. When he teams up with fellow agent Vicki Taylor (Keith), he is tasked with getting to the bottom of what happened to a bunch of children that were involved in a top-secret government program. However, if Agent Oakley (Steele) is involved, you can bet this will be a (Capitol) conspiracy that goes…you guessed it, all the way to the top. Along the way, Jarrid – which is, evidently, how he spells it – gets into a bunch of fights and shootouts. Will he unravel THE CAPITOL CONSPIRACY?

We were worried at first, at least after initially seeing the box art, that this might be an attempt at “more serious Don” – in other words, an actionless political drama. Thankfully, that is not the case, as our wonderfully wooden old pal The Dragon gets into plenty of fights, including the time-honored barfight, and his gun is always at the ready as well – although we much prefer the Martial Arts combat scenes. As you might expect with a Roger Corman-produced, Fred Olen Ray-directed outing, you get some punching, some kicking, some shooting, some nudity, a bit of plot and a smidgen of Barbara Steele and it’s all wrapped up in about 80 minutes or so. It won’t tax your brain or your schedule too much.

Another thing low-budget actioners like this seem to have in abundance are actors that look like other actors. There’s the Gary Busey guy, the Michael Dudikoff guy, and the Jake Busey guy, but, in all fairness, this might all be the same guy. Impressively, someone else looks and sounds exactly like Charles Napier. Just why they couldn’t get the original Napier to be involved is unknown. Because it was 1999, our hero Maddox has Earthlink email that talks. Not only does it tell you that “you’ve got new mail!” (they probably had to add the word “new” to avoid legal action), but it reads your message out loud too. Welcome to the future. And Jarrid Maddox is leading the way. 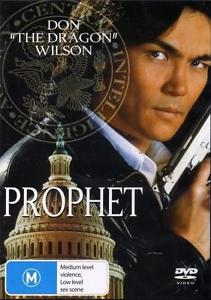 A movie highlight comes when Maddox is on a plane, innocently trying to read a book. Suddenly two wrestlers – one wearing his championship belt on the plane – begin getting a bit too rowdy for their own good, and Maddox has to calm the situation down. Despite his painful flashbacks, the man can act independently as his own Air Marshal. He even gets the phone number of the stewardess for his trouble. Is there nothing the man can’t do? Our point, really, is that The Capitol Conspiracy (or Prophet if you prefer) needed more scenes like this – unbridled silliness that brings the fun level up a few notches.

All in all, The Capitol Conspiracy may not be the best Don outing out there, but it’s certainly worth watching, and it goes by without causing any undue stress or anxiety in your life. Unlike the victims of the aforementioned conspiracy. Also, the trailer for the film features footage from other Don movies that are not this one, in order to pump up the action quotient.

I agree. This was an average Don. The video boom was over and DTV budgets were going down, which is definitely seen in the lack of bigger-budgeted action scenes.