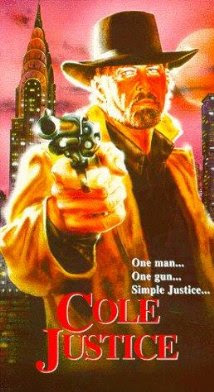 Beginning in 1953, Coleman “Cole” Justice (Bartholomew) is out on a date with his best girl, Betsy, taking in a viewing of Shane. After the movie, they’re walking home and Betsy realizes she dropped her locket. Cole runs back to the theater to pick it up, and it’s then when a gang of ne’er-do-well punks assault Betsy and rape her. (Now might be the appropriate time to mention that the actress playing Betsy is named Amy Raper. Could this possibly be a coincidence?). When Cole finds out what happens, he is destroyed and vows revenge.


Cut to 1989 in Tulsa, Oklahoma. Cole Justice is now Professor Justice, teaching a class in Western Cinema to his enthusiastic students. It seems like after the night he viewed Shane with Betsy, something stuck in his head about that and he can’t move beyond it. He’s obsessed with Westerns, becoming an encyclopedia of facts and quotes about them, and even his home is decorated in a Western motif. Professor Justice, who is a dead ringer for Inside the Actor’s Studio’s James Lipton, is irresistible to the ladies. When one of his students, Michelle Fresnay (Amy Gruebel) – who has a crush, naturally, on him – is found dead after a bad dose of crack (yes, it was going around even in the suburbs of Oklahoma at the time), something reignites in Cole Justice. Dressed in full cowboy regalia, he hits the streets to find out who is responsible, and deal with it – in true Western style.


Because he’s righting wrongs all over town, the media dubs him “The Cowboy Killer”. At the top of the baddie food chain are Jack Keeter (Willard Clark), a man who looks exactly like Barney Miller’s Hal Linden, and Wes Santee (Mike Wiles). (Not only is there a Western from 1973 with Glenn Ford named Santee, it’s also Dolph Lundgren’s name in Army of One). As if Cole Justice didn’t have his hands full enough, he still finds time for love, deal with family issues, and he  even gets involved with the forced retirement of Security Guard and buddy Pop (Nick Zickefoose) by the evil Dean of the college, Lindsay (Noel Fairbrothers). Will Cole live up to his name and truly get JUSTICE?


Cole Justice was a pleasant surprise. You can easily tell it was a passion project for director/co-writer/co-editor/star Carl Bartholomew, and the heart he and the rest of the cast and crew bring to the movie is apparent and infectious. Fighting mightily against the tide of its rock-bottom budget and novice actors and crew, Bartholomew and his posse managed to rustle up a winner.


One of the main reasons for this is that Cole Justice is a likable character. So many movies, both low and high budget, don’t have likable characters. Cole Justice – the movie – has multiple people the audience really warms to. Not just Cole, in fact, but also Pop and Cole’s students such as Chris Lomac (Keith Andrews). Bartholomew has a great broadcaster’s voice and I’d like to hope he did radio or voice-over work in Oklahoma during his life (he sadly passed away in 2009). Lomac and his classmates hang out at a restaurant with a giant animatronic chicken. Like all college students.


There is not just footage, but repeated footage of the aforementioned Shane, as well as Once Upon a Time in the West (1968). Justice goes to a place called “The Cinema” to watch them. While it predated all the revival theaters that are currently hot today, it doesn’t get many points for originality when it comes to the name.


Of course, there are plenty of Middle-Aged Punks (MAP’s) in the movie, and why not? Rae Don video specialized in them. Many of their releases, such as Provoked (1989), Rescue Force (1990), and Punk Vacation (1990) feature them. Could this also be a coincidence? But, in all seriousness, perhaps the reason more people haven’t seen Cole Justice is because Rae Don didn’t have a huge reach back during the video store era.


We should also mention that Cole Justice also has a lovable dog named Frisco, and we’re treated to this credit at the end of the movie – “Frisco the Dog – Frisco”. So now we know that Cole’s dog has approximately the same acting range as Mike “Cobra” Cole.


Not to be confused with Mike Justus, COLE JUSTICE was released in the golden video store year of 1989, and is an interesting and worthwhile find, if you can indeed find it.