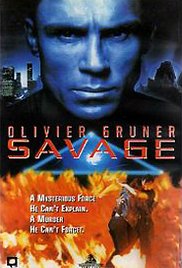 A humble farmer named Alex (Gruner) has his life turned upside down when one day evil baddies show up at his ranch and kill his wife and son, seemingly for no reason. In no time at all, Alex becomes a “Savage” – living in a cave, foraging for food, water, and shelter, and eating ants like Tic-Tacs. He also has superhuman strength and the ability to jump long/high distances. Meanwhile, Titan Corporation is giving the world the latest in VR technology. Its president, Reese Burroughs (Salem) is a demented nutjob who is convinced the ancient gods of Atlantis are currently chillin’ in the internet.

Marie Belot (Minter) is his henchwoman but has doubts about all the craziness going on around her. It seems many goons - possibly dispatched by Titan Corp - have set out to find and kill Alex, who in the meantime has teamed up with a policelady named Nicky (Grant). Will Alex and Nicky be able to stop Burroughs, who is willing to destroy mankind in order to achieve immortality? Find out when the SAVAGE meets the sophisticated computer tech of 1996…

Savage is the type of movie you would have seen on Cinemax, The Movie Channel, or any of the other American pay channels back in the 90’s. It also seems like it might have aired on the Sci-Fi Channel before it stupidly changed its name to Syfy (which we pronounce as “siffy”). Sure, the movie makes little sense, but who really cares? Low-budget sci-fi or horror movies that make too much sense are usually boring.

They descend into procedural slogs because the filmmakers are obsessed with “making sense”. The problem is, on the flipside of that coin, if a movie makes too little sense for too long, the audience will give up and get bored. Thankfully, Savage skirts that particular fate, but just barely.

Director Nesher, who worked with our old buddy Olivier Gruner again that same year with Mercenary (1996) – and also is known for “Comeuppance Classics” such as Timebomb (1991) and The Taxman (1999) here tries his own take on The Terminator (complete with Gruner wearing a similar leather jacket to Arnie as he tears up L.A.), but imagine if The Terminator was written by Erich Von Daniken after an LSD binge.

Okay, Savage isn’t THAT good, but it makes the same amount of sense as that project might have made. That being said, Schwarzenegger was never referred to as “Goat Boy”, as Gruner is here, owing to his barnyard-like smell, but our memories could be a bit off on that one. 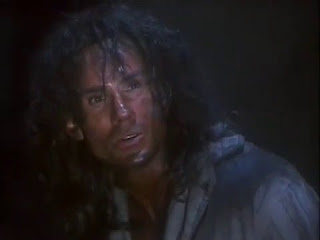 But before he becomes known as Goat Boy, the transformation of Gruner from Family Man to Caveman is rather swift and without explanation. What passes for explanation in the scenes to follow don’t help matters much. Because it was the 90’s, VR was incredibly hot and seemingly every DTV movie of this era dealt with it in one way or another. But Savage is perhaps the only VR-based action outing to have ghostly-white spirit people made of the pure energy of mankind. Or something like that.

Another question: is this movie supposed to take place in the future? If so, why do people have pagers? The whole outing is a mess of a jumble of a mishmash, but we suppose that’s all part of the fun. Plus it has funny dubbing and the VR world looks like the video game Lethal Enforcers. Imagine being IN Lethal Enforcers. Pretty cool, right? But why is Gruner a savage caveman? We think we may know, but, anyway…


Gruner gets to show off his fighting skills in the jail scene, the biker scene, and the internet café scene, but it’s his aforementioned great jumps that truly steal the movie. The rural scenes feature some great scenery as well, which is worth noting. Many of the characters are named after authors, which is rather obvious, as there are people in the movie named Allen Poe, Edgar Wallace, Verne, Spillane, and Burroughs. Okay, we get it. But what possible literary inspiration could this mess of a movie have sprung from? If you have any ideas, please let us know.  We’d love to read it.


In the end, Savage represents the more unorthodox end of the 90’s DTV action spectrum. Whether that’s a good or a bad thing depends on your tolerance for loose ends and cinematic chaos. To the movie’s credit, it must be said that they don’t make ‘em like this anymore. For that reason alone, Savage is, at the very least, a one-time watch.

Comeuppance Review by: Brett and Ty
Posted by Ty at 2.7.18

I completely agree. Gruner’s movie career would sink to far greater depths, but this was definitely the time when things started going astray for him. Many sci-fi-influenced action movies were released around this time, possibly inspired by the popularity of The X Files, although The Terminator was an easy blueprint.

You're absolutely right. That's a good observation-It was the 90s, and everyone thought "the truth was out there".