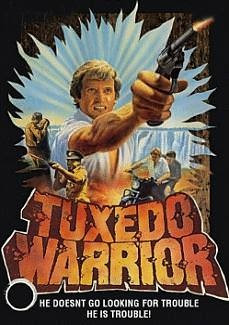 
“Tuxedo Warrior, when will you ever learn?” - Sally


"He doesn’t go looking for trouble…he is trouble!"


Cliff (Wyman) is a surly strongman who only appears to like three things in life: to sit in his bar in Zimbabwe and drink whiskey, to manhandle the local female population, and to play aggressive, solo shuffleboard with flaming shot glasses of an unknown alcohol. He also has a pet monkey named Crapshot. (Though it may be Crackshot. Wouldn’t Crackshot make more sense?) Cliff’s life gets slightly more complicated when…well, normally we don’t do this, but perhaps it’s best if we let the amusingly overwrought, overheated, and, frankly, deceptive description on the back of the New World VHS box do the talking. Quote:


“The action races as fast and furiously as charging rhinos in Tuxedo Warrior, an adventure of passion, greed, and desperate struggle set in the hot cauldron of turmoil that is Africa today. Cliff (John Wyman) is an adventurer. Strong, heroic, but worn and scarred. His bar, The Omega, is a hangout for lost souls and dubious characters located near Victoria Falls in Zimbabwe. A gang of diamond thieves is on the loose, headed his way. An old flame and her husband have robbed a bank and are on the run. The authorities are searching for the diamonds and stolen money. Cliff is caught in the center, dangerously enmeshed in divided loyalties. Running the thin line between heroic friendship and illicit activity. Part lover, part fighter. He’ll blow you a kiss or blow you away. It’s non-stop action in overdrive through untamed territory where the most dangerous animals are human.”

To correct the record, it’s non-stop boredom in overdrive. And I certainly don’t want Cliff to blow me a kiss or blow me away. While sporting a small handful of silly barfights, chases and gun-shooting, Tuxedo Warrior is far closer to a dialogue-heavy, romantic soap opera like Days of Our Lives or As the World Turns than anything resembling an action movie. 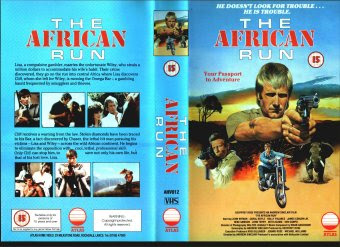 The best you can say is that it was trying to be an “adventure” movie (as opposed to action), but it’s just dull. Another sign of the desperate, the casting of celebrity relatives – in this case Holly Palance and James Coburn, Jr. – doesn’t really help the proceedings. Especially when Palance spends time talking to a dartboard. Plus, it’s hard for Cliff to seem menacing when he’s wearing a shorty robe.


In what is perhaps the ultimate missed opportunity, nobody in the movie refers to the Tuxedo Warrior, Cliff, as “Tux” for short. But perhaps it’s all for the best, as we all know Jackie Chan is the true Tuxedo warrior. Much like other movies featured on this site such as The Opium Connection (1966), Slaughter Day (1973), Battle Force (1978), or The Second Victory (1987), to name a few, Tuxedo Warrior falls into the category of staid, safe drama and not action. We’re here to pass on the info – don’t get suckered in by the title and the promise of action that compares itself to charging rhinos like we did (and have done so many times before). When your movie – and its audience - cries out for an appearance by Simon MacCorkindale, and said MacCorkindale does not appear, despair quickly sets in.


Final notes: Tuxedo Warrior is a Manson International production, and features some music by Rusty Egan of the band Visage. It’s all in the background and doesn’t improve things like you think it might. Chalk up another disappointment. There also may be some similar shooting locations to Damned River (1989). Also there’s an actress, in her only credited movie role to date, whose name is Carmel Pocket. She has a great name. But not great enough to save the movie, unfortunately. We only hope she did some candy commercials in her on-screen career.


In 1986, when the New World VHS was released, there were many videos on store shelves. Tuxedo Warrior was one of them.