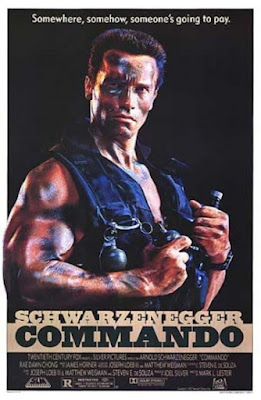 
When the awesomely-named John Matrix (Arnie) retires from a life of globe-trotting Special Ops commando work, all he wants to do is spend time with his beloved daughter Jenny (Milano). Instead of feeding the local deer and eating unknown sandwiches, Matrix’s past comes back to haunt him: the diabolical Arius (Hedaya) uses a team of mercenaries, including Matrix’s former associate, now evil, Bennett (Wells), as well as Sully (Kelly) and Cooke (Duke), among others, to force Matrix to depose a South American dictator so Arius can step in and make himself El Presidente. They’ve kidnapped Jenny and are forcing Matrix to do the job. Rather than submit to their demands, Matrix uses his considerable skills to turn the tables on the baddies and rescue his daughter. Along the way, he teams up with an unlikely partner, an innocent bystander to all the chaos named Cindy (Chong). John Matrix will prove himself to be the ultimate COMMANDO as he executes his ultimate mission: rescue Jenny! Will he do it? Well, you probably already know…


Perhaps the pinnacle of the 80’s action boom, the great and mighty Commando is everything an action movie should be…and more! It’s a completely entertaining, winning, engrossing, fun spectacle that features non-stop over the top action and hilarious one-liners from Schwarzenegger. Heck, this movie practically invented the “action movie one-liner” that we all take for granted today. However, it must be said the Arnie used two of them in The Terminator (1984) as well, but hey, there’s plenty to go around. Director Lester even reportedly counts this as his favorite of his own movies, which isn’t at all surprising. If I directed it, it would be my favorite too. (One supposes Hitman’s Run wouldn’t give Commando much of a run for the top position, but Lester also directed the excellent Showdown In Little Tokyo, so that must be a strong #2 in his eyes). 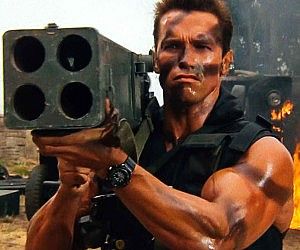 Commando is a vivid evocation of the 80’s rise of Arnie and the action movie in general. It was a great time in movies when if the filmmakers had to make a plot choice between either something logical, or something manly/muscular/action-oriented happening on screen, logic was chucked to the side because it’s far less important. Mr. Schwarzenegger remains charming as ever here, whether he’s reading Creem magazine and opining about Boy George, or shooting/blowing up/knifing/chopping/slicing/impaling people or getting into car chases or other death-defying stunts. James Horner’s score should also be singled out for mention, as it alternates between synth stabs during the action scenes, and the time-honored 80’s sax elsewhere. It’s really the perfect score and fits the movie well.

Kudos also go to the writers and director Lester for ensuring that this did not turn into an El Presidente Slog, as we call them, which it easily could have. Yet more props go to the excellent (and extensive) stunt performers on the film. As mentioned earlier, Schwarzenegger doesn’t have to carry the whole movie on his back like so many logs or phone booths. A top-notch cast is assembled around him to ensure quality all around. Someone should ask Alyssa Milano today what she thinks about Commando. There’s even a Rambo-style “Trautman” character that doesn’t get much screen time, perhaps because he’s not as important as all the Arnie action. 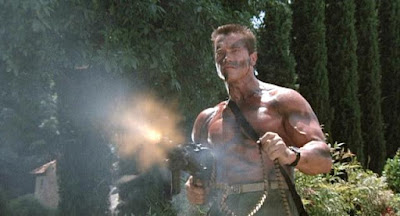 It should go without saying, but the cinematography is crystal-clear as well and you can see everything perfectly (unlike the movies of today). So when you see Arnie blowing up Jeeps with a rocket launcher, you really see Arnie blowing up Jeeps with a rocket launcher. It’s all a ton of fun, with a rich vein of humor throughout. The whole outing, seen from today’s perspective, harkens back to a time when you really got your money’s worth from your movie theater ticket. As a slam-bang, total-entertainment spectacle, you walk away feeling satisfied. Perhaps even uplifted, as Power Station’s “We Fight For Love” pumps on the soundtrack as the credits roll.


The thing is, if you DON’T like Commando, that might be a sign that you need psychological help. Symptoms of NLC (Not Liking Commando) should be listed in the DSM-V Manual of Mental Disorders. If you ever find yourself not liking this movie at any time, for any reason, please consult a medical professional. Commando rules!

NOTE: When buying the movie, seek out the 2007 American DVD. It’s the director’s cut and contains more violence.

At this point, you should know by now how thrilled I am with the quality of the site's reviews. After hundreds (thousands?) of reviews, you still manage to make them informative, fun and fresh. That's writing talent, my friends.

I fully agree with your four-star assessment for Commando. If there was an 80s action movie Hall of Fame, it's a first-ballot nominee. It really is as close to a perfect action film as there ever was. All of the elements were excellent: the violence, comedy, drama, and the music (as you had mentioned). Heck, even the chain-mail vest looked cool!

Fun fact I just learned about the film: there was a toy ninja figure created as a marketing piece. At that point, I think the producers were thinking that perhaps the only thing that could have improved Commando was Matrix beating up a ninja!

My favorite movie of all time. Everything is perfect about it: effective story, splendid cinematography, suitable actors and music, and some of the best dialogue ever written. Mark L. Lester was in Finland for the Night Visions film festival in November, and joined the audience in watching the premiere of the Finnish horror-action-comedy hybrid It Came From The Desert. The Power Station song in Commando was their only one to feature Michael Des Barres as their singer, and was later renamed to the more fitting Someday, Somehow, Someone's Gotta Pay. Like all groundbreaking action movies, Commando was originally banned in Finland.

1985 was a great year for action movies, and the time when action movies reached their peak. The year gave us some of the best action movies ever made: Commando, Rambo II, Invasion U.S.A., Death Wish III and American Ninja. The same level of awesomeness continued into 1986 with Cobra, etc. Schwarzenegger’s and Stallone’s output summarizes the 80s action movies best. I have always been especially impressed with how Stallone directed his movies mostly by himself. The directors were only there because the studios forced them upon him after his Staying Alive fiasco, but they had minimal input in directing him or the plot.

You are so right about the cinematography. Its such a bright and crystal clear movie, every action scene is right there for our viewing pleasure. No shakycam or moody dark lighting. Commando has to be the 80's action high point, especially in the 'one man against the odds' genre . one liners, from the hip ultra accurate shooting, amazing action set pieces and a truly top quality supporting cast. They really don't make them like this anymore!

Joe: Thanks for being one of our biggest fans! We really appreciate it. We didn't about the potential Commando toys, which was interesting to hear about. If Rambo, Chuck Norris, and even Over The Top got toy lines, why not Commando? The 80s were a golden age for toys as well as action movies.

Roger: We can see why this is your favorite action movie of all time! It really has it all. It epitomizes 80s action at its finest, and always stands up to repeated viewings - always the sign of a classic. This review has been a long time coming. We didn't know they renamed We Fight For Love. Thanks for informing us and the readers.

Anonymous: We always say "they don't make them like this anymore" and of course you are correct. It's why people always go back to the golden age of action cinema again and again. Thank goodness for Commando!

gotta disagree though with one sentence in the review

THIS MOVIE IS ALL AND ONLY ARNOLD and his big shoulders, there are NO SUPPORT CAST of any kinda to be found, and how can you mention alyssa milano in a commando review, completely irrelevant, this movie is big guns + muscles and big explosions and no acting whatsoever and thats about it

Hahaha! You're right. Its only Arnold 100 percent