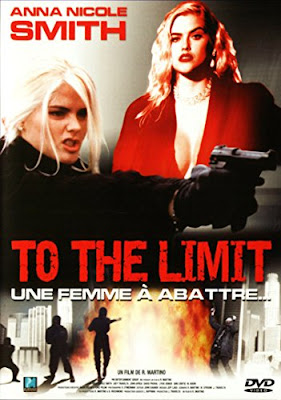 When a baddie named Arthur Jameson (Bannon), who is so evil he has the ability to blow up helicopters using nothing more than a CD-ROM flight simulator, crosses the wrong woman, Colette Dubois (Smith), all hell breaks loose. In order to avenge the death of her husband, China Smith (Nouri, presumably no relation to Anna Nicole), it turns out Colette must team up with Vietnam vet Frank Davinci (Travolta). While Davinci has enemies of his own, he also has a support system of fellow goombahs such as Elvis (Dentie), Don Williams (Richmond), and Father Rich (Levine). As an ex-CIA agent, Colette has skills of her own. Will the unholy marriage of mobsters and disgruntled ex-government officials prove too much of a challenge for Frank and Colette? Or will your patience be tested…TO THE LIMIT?

While watching To The Limit, you can practically hear the sound of whirring VHS tape as guys who were in their teens and twenties in the 90’s fast-forwarded to get to the Anna Nicole Smith nudity. However, as this is a PM-produced action movie, we tried to keep the action elements in mind, and there are plenty of gunfights, blow-ups (including not one, but two helicopters), and PM’s time-honored car flip/blow-up that has become so near and dear to our hearts over the years. PM had a pip of an exploitable element in Smith; sometimes, in our nation’s darkest days, Joey Travolta alone isn’t enough to get a potential renter to pull a movie off of a video store shelf.

You have to remember it was the go-go 90’s, and renting To The Limit carried with it less embarrassment than renting a Playboy video (though that’s debatable). Interestingly enough, this is a sequel to Davinci’s War (1993), of all things. Anna Nicole’s PM follow-up, Skyscraper (1996), came the next year. A lot of the same cast and crew of Davinci’s War came back for this particular outing, and it’s easy to hear a variation of this phrase being said during a pre-production meeting: “we’ll produce your film if you put Anna Nicole Smith in it”. That may be just one of the reasons why this movie makes no sense in the plot department and is pretty much a jumble from start to finish. But it matters not – we would say that you would have to watch Davinci’s War or Skyscraper first or this movie would make no sense, but the fact is that it makes no sense whether you see those movies first or not. 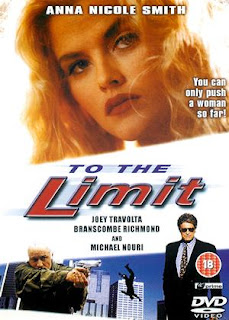 Though it must be noted that Davinci has a Vietnam flashback where he runs from an explosion in slow motion, and it also must be noted that in the scenes where she wears a brunette wig, Anna Nicole looks alarmingly like Monica Lewinsky. In most of these scenes, she’s talking to Travolta, who looks like George Carlin. At least they have similar hair. Travolta and Carlin I mean. So if you’ve ever wanted to see what it looks like for Monica Lewinsky and George Carlin to have a conversation, now’s your chance. There’s also a guy named Philly Bambino in the movie (Aprea). They couldn’t even get Vanity to reprise her role of Lupe.

Of course, To The Limit makes no sense as a mishmash of Davinci’s War sequel/Playboy video/PM action movie, but you knew that going in, didn’t you? Finding a VHS tape like To The Limit at your local video store was all part of the fun of that era. Thanks to Amazon Prime (as of this writing), you can relive it.

To The Limit was a mediocre PM movie. Skyscraper was the better of the two movies Smith made for VHS or boob tube, so her action career wasn’t a total bust. One could even claim that she is in contention for the division D cup of action heroines.