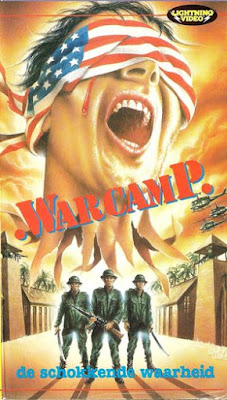 
In the jungles of Vietnam, a group of mercenaries is on a rescue mission to save some captive American prisoners. One of which, a guy named James Brook, may have secret plans to annihilate Hanoi with an atomic bomb. Led by Aviles (Malonzo), he leads his compatriots Jo Lin, Robert Jason, Fernando, and Singh Su through many, many machine gun fights and chases. Eventually they end up at the dreaded WAR CAMP, where prisoners are kept in cages and held captive by not one, but two evil baddies. Lem Jing is the evil guy with the oversized 80’s glasses, and Minh Dem is the evil guy who takes dramatic pauses in his speech, making him the Vietcong William Shatner. Will our heroes survive to shoot and stab another day?

The Vietnam War continues to rage in the Philippines in WAR CAMP, yet another addition to the waterfall of late 80’s jungle shoot-em-ups. If you like lots of machine-gun shooting amidst verdant, tree-filled locations, this is the movie for you. Lots of faceless guys in those conical rice-paddy hats get filled full of lead and fall into shallow pools of water. Strangely, there are no guard-tower falls on show, but there is a lengthy (and prerequisite) torture scene that apparently tries to outdo The Deer Hunter (1978) at its own game. Literally.

Here, arm wrestling takes an even more sinister turn than it did in Over The Top (1987), wherein the competitors’ wrists are each bound to a wire of some sort, and it’s attached to yet another machine gun, so when the loser goes down, it yanks the cord and he goes down permanently. It really takes all the joy out of the term wrist wrasslin'. A lot of time is spent in and around this device. Obviously, the filmmakers were really proud of it. On top of that, there are plenty of booby traps in the jungle, and we are informed one of them is called a “punji stick”. You learn something new every day.

The movie is clearly influenced by other “war camp” movies such as Missing In Action (1984), Missing in Action 2: The Beginning (1985), and P.O.W. The Escape (1986). But director Jett Espiritu, as cool as his name is, did not have the resources those comparatively bigger movies had. So here we get the rough film stock, choppy editing, and funny dubbing those “third-world”-style movies all have, but it is somewhat charming. They used what they had to the best of their ability, and you can see that. Rey Malonzo from Search For Vengeance (1984) is on board, so that’s something.

There’s next-to-nil character development, but in place of that, lots and lots of people get shot with a machine gun, or, barring that, stabbed, tortured, or beaten up. But it’s all in fairly good fun and the synthy score helps. That and the fact that it’s 84 minutes. So, if you just can’t get enough jungle-shootin’ action, War Camp can stand alongside others in that illustrious canon.