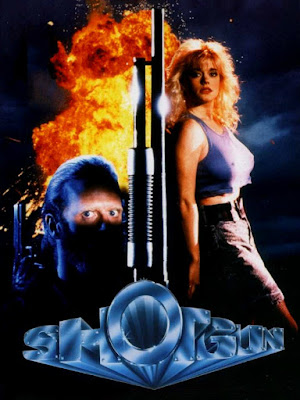 
Set amongst the sleazy milieu of Hollywood’s hookers, strippers, and porno shops (you know the shops are sleazy because the store clerk wears a leather vest and no shirt), two heroic police officers are there to clean up the streets. Ian “Shotgun” Jones (Chapin), and his partner Max Billings (Hutton) just want to do their jobs, but, of course, bureaucratic red tape is always standing in their way. When a Zipperface-style leather-clad maniac goes on the loose killing the local prostitutes, Jones and Billings snap into action. Of course, Shotgun’s sister Tanya (Caple) is one of said prostitutes and ends up dying at the hands of the so-called “Basher”. This leads to turmoil that ultimately winds up with Shotgun having to turn in his badge and gun.

He becomes a bounty hunter, AKA a skip tracer, while Billings ends up getting promoted to Sergeant. It all comes to a head in Mexico, where Shotgun meets up with a Machine Gun Joe-style character who looks exactly like Paul Rutherford from Frankie Goes To Hollywood. They make a tank together and blow up the local Mexicans. But have we heard the last of SHOTGUN?

Shotgun. Sometimes simplicity says it all, really. This PM outing from the golden video store year of 1989 is a ton of fast-paced fun. It’s silly, it’s funny, it’s absolutely ridiculous – and it’s a must-see! With Miami Vice going off the air in January of 1990, the stage was set for the replacement for Crockett and Tubbs in the hearts of viewers – Shotgun and Billings, of course.

Of all the COTEs (Cops On The Edge) we’ve seen to date, Shotgun Jones must rank as one of the COTE’iest. What today would be seen as a serious anger management problem that requires rehab and therapy, in Shotgun’s day it meant only one thing: results. The man punches and/or shoots anyone he darn well pleases. He has long red hair, a red beard, and comes off as Eric Stoltz with rage issues. He has a great voice and is unafraid of confrontational behavior. He wears a cowboy hat and duster coat when the mood strikes him. He’s our new hero. 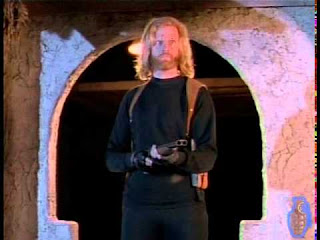 Interestingly, Stuart Chapin is the brother of Robert Chapin, of Comeuppance favorite Ring of Steel (1994) fame. What a family! Sadly, however, Stuart Chapin passed away last year after a criminally short acting career. But he did far more than many more prolific actors have done: he left us with Shotgun, a fantastically entertaining piece of work and a great showcase for his talents. He will be missed. 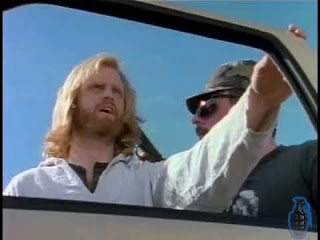 The main baddie, the Zipperface guy, should have been played by Chard Hayward. Maybe this is before PM could afford him. But as everyone searches for him, they all call him “The Kinko”. Presumably this doesn’t refer to his ability with a copying machine. When Billings is promoted, he keeps a stuffed Kermit the Frog doll in a prominent position in his office. It’s probably why he wanted an office in the first place. It might be the best piece of office décor since the Garfield phone appeared in all those Godfrey Ho movies.


Despite (or maybe because of?) low budget obstacles, director Addison Randall – a man whose name we’ve seen so many times in the credits we feel like we know him personally – created a real gem here.

All the other PM behind-the-scenes credit names we’ve seen countless times before are here too, including Jastereo Coviare, who contributes an absolutely fantastic title song. He appears briefly as one of Shotgun’s quarry as well. Coviare and PM mainstay John Gonzalez did the score, which consists mainly of wailin’/shreddin’ guitars and be sure to keep your ears open for the immortal lyrics: "The shotgun of Jones!"

The movie speeds by at 84 minutes. There’s literally no reason not to own – or at least see – Shotgun. It will put a smile on your face for sure. Anyone with a sense of fun should step into the world of Ian “Shotgun” Jones!

Yes, this is enthralling and exhilarating - perhaps even excellent, but best of all it is sardonic. I have to put this up in the pantheon of low budget sleazy black humor action crime masterpieces such as Lady In Red (1979), Public Enemies (1996), Angel's Dance (1999), God Bless America (2011).