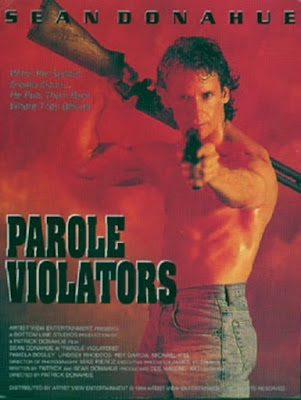 "It looks like you got into a fight with a pizza."- Tracy

Miles Long (Donahue) is a guy who really cares about his community. A former police officer, he now hosts his own TV show where he chases down PAROLE VIOLATORS, films them personally with his video camera, and, if need be, beats them up. He inexplicably wears a black ninja mask while taping even though he is the host of the show and everyone knows who he is. His night of filming usually ends with him duct-taping the baddies to a pole and writing the words “parole violator” on the bare chests of said baddies with a black marker. The area police are familiar with this local pole and check it regularly for the latest prey of Long, known in the community as “Video Cop.” Video Cop is in a relationship with policewoman Tracy Dodd (Bosley), and when her daughter Susan (Rhodeos) is kidnapped by some thugs that Long had put in prison in his former life as a regular cop, his raging hatred for parole violators kicks into full gear. Teaming up with Tracy, the pair go on a mission of rescue/revenge, and all the local baddies should know that their comeuppance is going to be MILES LONG!

Parole Violators is a wildly fun and entertaining gem in the vein of Samurai Cop (1991), Miami Connection (1987), or Geteven (1993). But would you expect anything less from the great and hugely underrated filmmaker Patrick G. Donahue? This wonderful man gave us the great Kill Squad (1982), as well as Savage Instinct (1991), also starring his son Sean, as this movie does. Both he and this movie as a whole are very Ron Marchini-esque.

Miles Long is a scrappy Martial Artist who just wants to play horseshoes in the park while wearing his large purple windbreaker. Instead, evildoers are kidnapping girls all around him and he is forced to snap into action. He can take a lot of damage, as he is constantly being punched, kicked, thrown off multiple cliffs and run over by multiple cars. But nothing will stop him on his mission. His serious-minded mullet is all business and you better not get in his way. Naturally there is the time-honored barfight - featuring a bouncer whose name is…Bouncer (Harvier Mims) – and an awesome Final Warehouse Fight. There’s also a goon whose name is Goon (Edwards). There are many, many scenes of Martial Arts fights and shooting. Choreographing and staging them were clearly a labor of love and it’s downright charming to watch.


The thing is, TV shows like Cops and America’s Most Wanted were hot at the time. The Donahue family (including actor Mike) just postulates what might happen if the host went from filming and talking about bad guys, to actually fighting them himself, mano-a-mano. It’s a great idea and it’s executed in a fantastically entertaining way. This movie was even ahead of its time in many respects – it predates current shows like Live P.D. by many years, and Miles Long is like a cross between Dexter and Louis Bloom, the main character of the fine film Nightcrawler (2014), as portrayed by Jake Gyllenhaal.

Most of the cast were one-timers who weren’t in any other movies. But if you’re going to be in one movie only, make it a winner, and they clearly did that with this diamond in the rough. Unfortunately, this got little to no distribution on VHS. It desperately needs to find a bigger audience, so here’s hoping a company like Vinegar Syndrome grants it a Blu-Ray release sometime in the future. For that winning combination of silly/awesome that is so addictive, seek out PAROLE VIOLATORS!

For the life of me, I don't know you manage to keep the site's writing so fresh. How many reviews have been written? Hundreds, at least. Yet, each review is a well-written synopsis of hard-to-find movies from yesteryear that call attention to a day and age of community video rental shops.

I've mentioned before numerous times how much I appreciate this site. I literally check it every day in anticipation of a new post. As an editor, you have to know how much I value quality writing, and you sirs produce top-notch content.

One thing I'd like to ask: Has anyone involved in these B-level flicks contacted you out of appreciation? I wonder because I would imagine many took part either for a paycheck or another bullet point on their resume, but for you to highlight low-budget work from decades ago that you consider at least respectable is commendable. I would think many folks would be honored that you complimented their output, whether it's writing, acting, producing, etc.

If NOBODY assures you your work here is appreciated, please understand I always will. I'm constantly amazed at how the quality of the work published is nowhere near diminished by the quantity of the output. I mean this with the greatest amount of sincerity possible: if there was an Action Movie Review Website Mount Rushmore, Comeuppance Reviews would undoubtedly have its logo etched upon it. You have my gratitude.

Once again, thank you, Joe. You truly understand what we're about and what we're trying to accomplish with this site. Your kind words mean a lot to us and they truly do give us the motivation to keep going. As much as you appreciate us, we appreciate you as well.

We typically post a new review every Monday night, east coast time (give or take). We do pride ourselves on our consistency, so we're glad you noticed that.

Some people involved in the movies we talk about have left comments on here. Here's some past reviews where you can check out the comments: Cyborg, Steele Justice, The Last Witness, Short Fuse, and one of our favorites, Instant Justice. Robert Davi and Daniel Baldwin have tweeted stuff on our Twitter page. It's always gratifying to see when people involved with the movies we review are nice enough to leave a comment.

Your observations, readership and kind words mean the world to us!

Thanks,
Brett and Ty

No problem, gents. Keep up the great work!

I'll be sure to check out those reviews. I'm looking forward to it!

Otm Shank here; In a country with over a billion low watt bulbs, I have been one of the very select few to explode in a celluloid supernova on the Bollywood screen. Call a contractor - because my home needs more mantles to display the hefty golden statues that recognize (and truly validate) the brilliance of my star. Only the recommendation of COMEUPPANCE REVIEWS could cast a pall to dim the shimmering of my life and light by drawing the curtain of Sean Donahue upon mine eye. Becky said it was the best movie she's ever seen! We laughed so hard, I fell of the couch (it's a narrow couch, but still!!!) not once, not twice, but THRICE! Gentleman - Thrice I say. You two are doing the Lord's work. The Lord of Fun.
Thank you for sharing this masterpiece and please, please, keep distributing real moments of joy in a too often miserable world. Your time and effort is spent and rewarded with great interest by those of us lucky enough to know COMEUPPANCE REVIEWS.

Otm Shank here - In a country still so dim by over billion low-watt bulbs, I have know the shimmering brilliance of being a celluloid supernova. Why my assistant is calling a contractor this very day as my palace requires more mantles on which to display the hefty golden statues that celebrate my dominion of the craft. The world, my oyster, my oyster blessed with a perfect priceless pearl. Suddenly Sean Donahue! What sort of warlock wielding the white-hot magic of whimsy is COMEUPPANCE REVIEWS? Becky said it was the best movie she's ever seen! I fell of the couch (to be fair, it's a narrow couch) not once, not twice, but thrice! Thrice off the couch and onto the floor with a busting gut! You've done it again. Mission accomplished boys. You have shared an otherwise unknown ray of brilliance and joy to keep the shadows of our too often bleak existence at bay for ninety more minutes. Thank you.

Thank you for the very well written and comprehensive comment!

The Awesome power of Parole Violators is very inspirational for us all.

Damn! Apologies for the double post...I was still so enthralled by this movie's magnificent power of pleasure, I lost all ability to spell correctly and post a comment. Do not operate heavy machinery after consuming more than 30 minutes of Sean Donahue.

No problem on the double post. Your last sentence should be on all VHS boxes starring Sean Donohue. It will save thousands of lives per year.

This is as close as you can get to a **** in my humble opinion. No one takes an ass kicking like Donahue! Too many great scenes to even count, but I love it when he jumps IN from the window and is asked how he got in. Amazing! Love this site and appreciate all you guys put into it. Would love a glossary for classic Comeuppance terminology like COTE, BYC, etc.

Thanks so much for the kind words! Clearly you have great taste in movies, judging by your comments on this, Stickfighter and Brutal Fury recently. We're big Donohue fans too. We'll do a podcast segment about it shortly